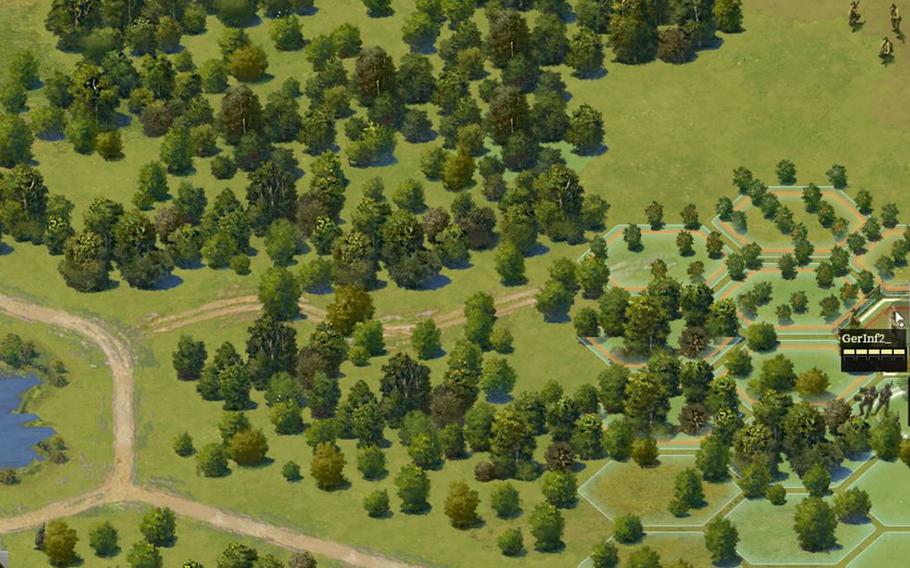 A unit of German soldiers fails to complete an order by a player of the war game "Burden of Command," which aims to simulate the uncertainty of leadership in battle. (Photo courtesy of Luke Hughes)

A unit of German soldiers fails to complete an order by a player of the war game "Burden of Command," which aims to simulate the uncertainty of leadership in battle. (Photo courtesy of Luke Hughes) 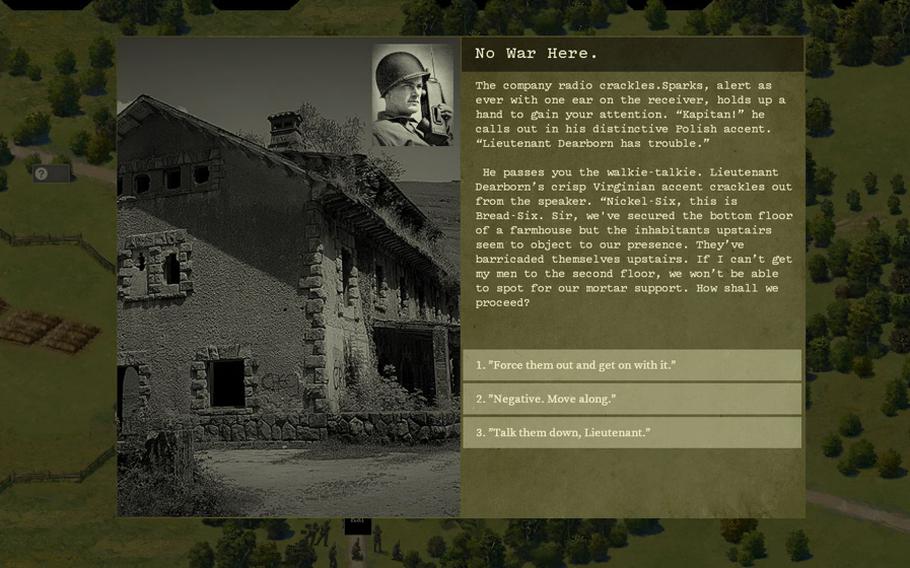 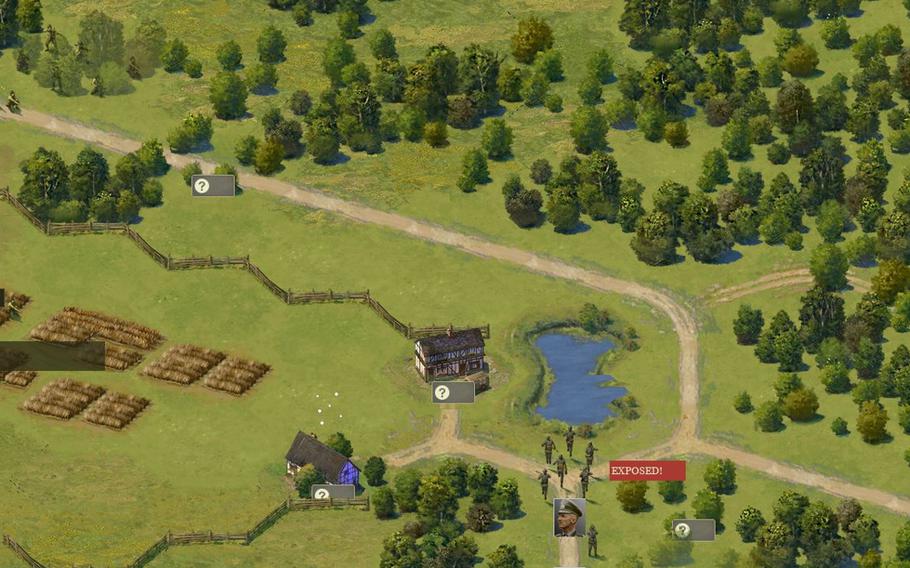 A unit of German soldiers stumbles into the sights of American GIs, who fire on them in the video game "Burden of Command," which aims to simulate the uncertainty of leadership in battle. The game is currently in development. Courtesy of Luke Hughes (Photo courtesy of Luke Hughes) 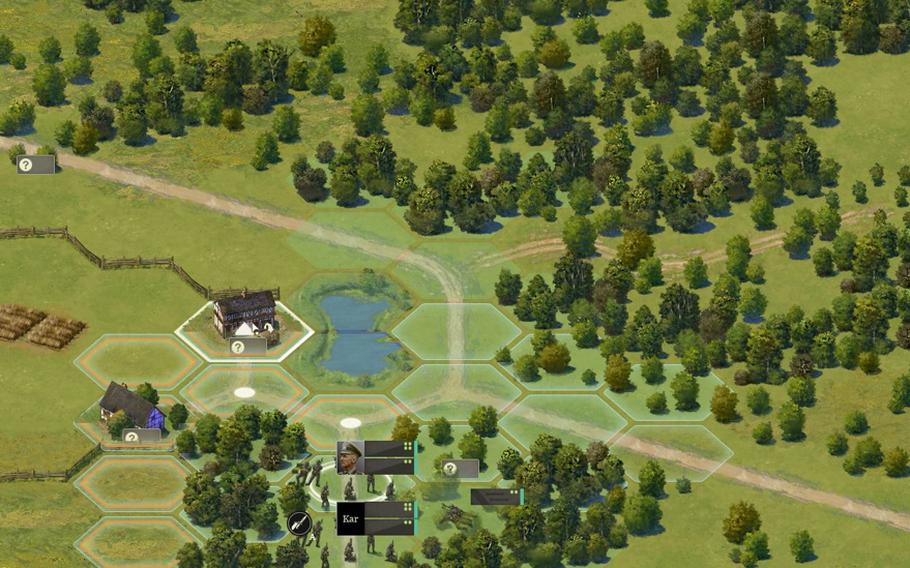 A player selects a unit of German troops to move around the map in the video game "Burden of Command," which aims to simulate the uncertainty of leadership in battle. The game is currently in development. (Photo courtesy of Luke Hughes) 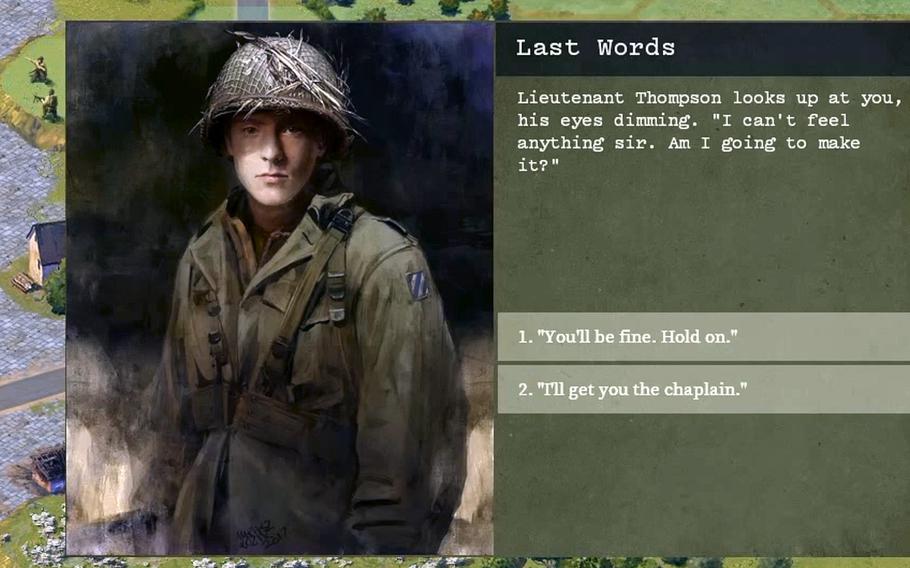 The upcoming video game ''Burden of Command,'' a World War II battlefield simulator, is designed to show players the complexity of leading people into battle. (Courtesy of Green Tree Games.)

A strange thing happened when Luke Hughes ordered his troops to charge into battle — they stayed put.

The independent video game developer had issed an order calling for a digital German infantry unit to assault a farmhouse that was well-defended by American troops. But the German soldiers ignored him.

In many combat-themed strategy games, soldiers are simply a collection of polygons that do what a player commands, even if it means certain death. Think of pawns sacrificed on a chessboard.

But Hughes’ upcoming “Burden of Command,” a World War II battlefield simulator, is designed to show players the complexity of leading people into battle. It’s an approach its creators at Green Tree Games credit to a roster of combat veteran consultants and testers, and it might offer a level of realism rarely seen in such games.

“This is the antithesis of a power trip. It’s about the pain of responsibility,” said Hughes. “If you want to be in control, don’t play this game. If you want to lead in the face of chaos, this is the game for you.”

Hughes gave Stars and Stripes a look at the game’s battlefield portrayal by playing the game over Skype in December. A history buff, he based the game on real-life details of the Army’s 7th Infantry Regiment — the “Cottonbalers” — which fought in North Africa, Italy and Germany.

Its core features are complete, and it is undergoing initial release testing. The company is still seeking veterans to test it, but some 200 testers and combat veterans already have volunteered to help refine the game’s portrayal of combat.

R.A. Mathis, an Army veteran and early play tester who helped write the game’s scripts, said first-person-shooter games like “Call of Duty” don’t capture the feeling he had as a cavalry officer deployed to Iraq, east of Saddam Hussein’s hometown of Tikrit, at a time of deepening insurgent violence in 2004 and 2005. Death, he said, is too easy in such “killing simulators.”

The soldiers in “Burden of Command” are programed to want to avoid death, so players can’t simply control them like robots, but must earn their trust and get them to risk their lives willingly during the course of the game.

Half of the action is turn-based combat in which units alternate moving and firing on a map divided into hexagonal tiles. The other half is like a choose-your-own adventure book, in which a player’s decisions affect both the narrative and the combat portions.

In one combat scenario Hughes loaded, two platoons of American soldiers were positioned east and west of some farmhouses with German soldiers nearby. Playing both sides, Hughes had to prioritize his moves, because officers can give only a limited number of orders per turn.

Players expend “command points” not just in positioning troops or initiating attacks, but also in making trade-offs in deciding how, when or why such orders are given, which can boost troop morale or sap their confidence. For example, Hughes used up the last of his turn’s commands to urge a machine gun team to hurry after he’d sent it to a key spot so they’d be able to shoot one turn sooner.

Next, the Germans moved, but were spotted by the Americans and automatically came under fire, getting pinned down in the west. To the east, the Americans held a fortified position in a house, which is where the Germans defied Hughes’ orders to attack. Either they hadn’t received the command or deemed it too risky.

“If you order them to assault, they do a morale check: ‘How scared am I? How much risk do I think this is? How much do I trust this officer?’ ” Hughes said. “They’re not particularly keen to die for you if it’s a stupid call, but the more their trust in you goes up, the more they’re willing to go firing into the breach.”

In a typical war game, opposing forces attack each other until one takes enough damage that it is destroyed. That encourages players to see combat as math problems based on physical health, Hughes said, but his game prioritizes a unit’s willingness to face danger, turning it into a more human calculation.

In one playthrough, a player chose to lie about a unit commander’s condition after he’d been killed in a freak accident. The troops had higher morale during an ensuing battle, but their trust fell when word got out about their leader’s death. What had been a short-term gain could have been costly in the long run.

Players eventually begin to consider their troops’ motivations, creating empathy Hughes hopes will connect them with the story. Each soldier is personalized with a backstory, a portrait and dialogue. As in real combat, when they die, they don’t come back.

“We want you to invest heavily and emotionally in characters so it’s harder for you to kill them,” Hughes said.

These game elements and details offer something unique, said Ed Halter, who is a media critic and author of the book “From Sun Tzu to Xbox,” which looks at the history of war and video games.

“This level of interpersonal action in its gameplay … seems quite novel,” Halter said. “I also think it speaks to the ongoing relationship between war games and war movies, as this is a narrative detail about a character one would expect more in a film than a game.”

Many games aim to be realistic accounts of battle but are usually judged by how closely they replicate war movies, not war itself, he said. A few have tried to portray human fallibility on the battlefield, but designers have had to balance making them real against keeping them fun.

For Mathis, the Iraq War veteran, players should have to experience a “knot in your stomach” as they wonder if they made the right choices ordering troops into danger, like he did overseas.

“This is more a look at the experience of war, instead of what it’s like to kill people,” Mathis said.