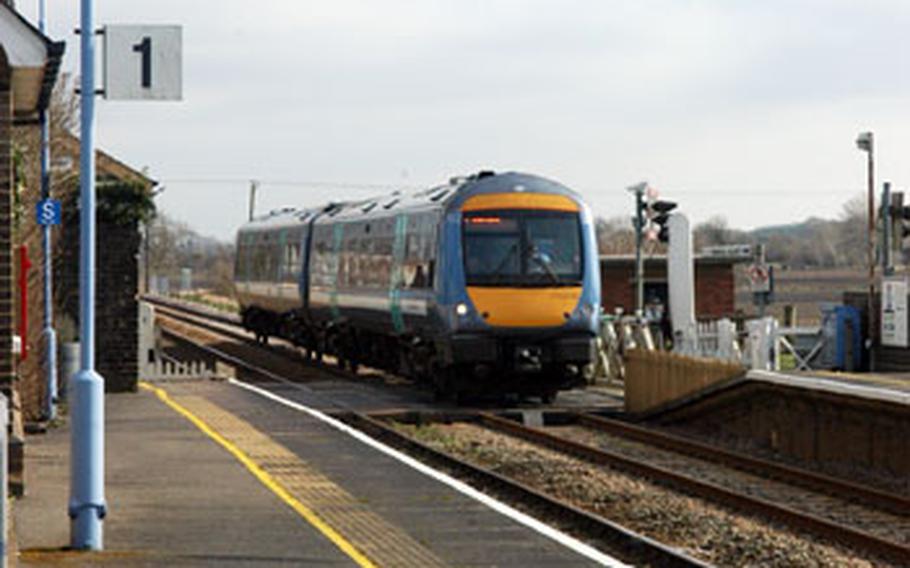 Buy Photo
The train crossing on the B1112 between RAFs Lakenheath and Feltwell earned a dubious distinction last month as Network Rail listed it as Anglia’s No. 1 spot for illegal crossings, when drivers and pedestrians try to cross the tracks as a train is approaching. (Geoff Ziezulewicz/Stars and Stripes)

Most folks living around RAFs Mildenhall and Lakenheath know it.

It&#8217;s that bit of inconvenience on the B1112 between Lakenheath and RAF Feltwell. A small rail crossing, known here as a "level crossing," where a man runs out to close the gates just before a train passes, usually resulting in a five- to 10-minute delay.

But that innocuous crossing earned a dubious distinction last month when it was listed as the No. 1 crossing for "bad motorist and pedestrian behavior" in the Anglia region, according to Network Rail, the owners and operators of Britain&#8217;s rail infrastructure.

That bad behavior involves people crossing when they shouldn&#8217;t, when the trains are speeding and the warning lights are flashing.

In 2008, the Lakenheath crossing reported 20 such instances, along with three near misses, when train conductors had to hit the brakes in order to avoid hitting a pedestrian or driver, Network Rail officials said.

While the Lakenheath crossing has gates that are manually put into place as a train approaches, some people try to get across as the red lights are flashing, according to Bill King, safety specialist for Lakenheath&#8217;s 48th Fighter Wing.

"The environment is there to take risks," King said, adding that speed cameras would deter people from risking their lives at crossings. "People are under pressure to get from A to Z and they try to beat the train."

While Air Force officials said there have been no reported instances involving airmen, the number of people trying to beat trains on foot or by car is at a five-year high, according to Network Rail.

Of the 3,400 crossing violations in England last year, more than three motorists a week, on average, were involved in near misses with trains, according to the organization. There were 20 collisions for those who didn&#8217;t beat the trains.

"Every week we see people who ignore warning signs and lights or drive round barriers at level crossings just to save a few minutes," Network Rail chief executive Iain Coucher said in a statement last month. "This behavior has the potential for massive damage, disruption and death."

Beside the risk of a grisly death, illegal crossings cost Network Rail nearly 2 million pounds last year, money it says could have gone into the trains and tracks.