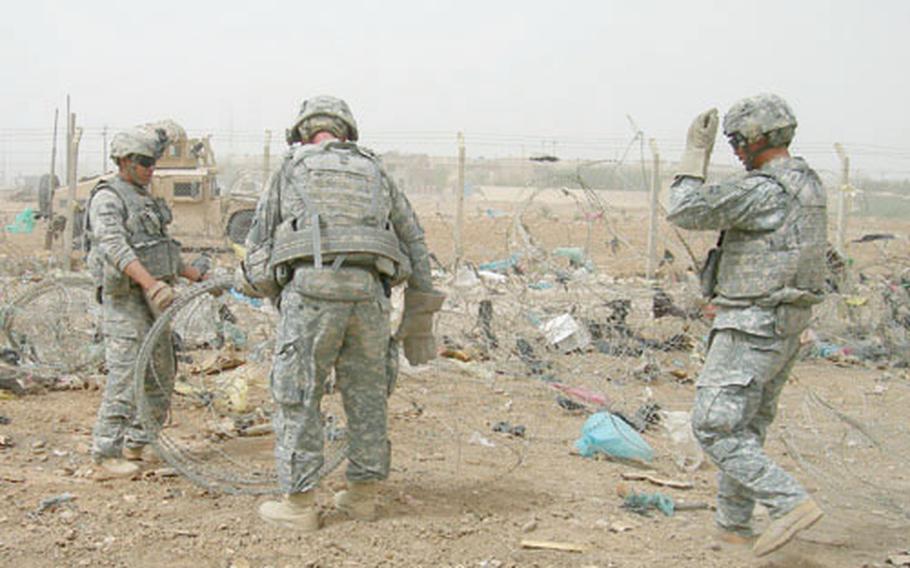 Soldiers with 1st Battalion, 22nd Infantry Regiment, Company E clear concertina wire from a field in Baghdad’s Jihad neighborhood. The curly razor wire collects trash and makes some residents feel like they’re living in a prison. The Americans hope removing it from Baghdad neighborhoods will bring a bit of normalcy back to the areas. (Justin Stuart/Courtesy of the U.S. Army)

BAGHDAD &#8212; The soldiers had been out on the streets since about 6 p.m. that night. They&#8217;d patrolled through trash-strewn streets to mark abandoned houses on a map, and they&#8217;d inspected passing vehicles after setting up roving checkpoints.

But Company E, 1st Battalion, 22nd Infantry Regiment still had one more job to do as the clock ticked closer to 10:30 p.m.: Clear a rat&#8217;s nest of concertina wire that their battalion commander had spotted in the area.

The chore was part of a larger effort to get as much of the curly razor wire off Baghdad&#8217;s streets as possible. Maj. Gen. Jeffery Hammond, commander of Multi-National Division &#8212; Baghdad, has asked units to clear wire from their areas in order to give the communities a further sense of normalcy. The change is a visible reminder of the increased stability in many previously war-torn areas.

Iraqis have long tried to make the best of unsightly security necessities by painting concrete barriers or decorating checkpoints with brightly colored artificial flowers. Yet concertina wire defies improvement like no other obstacle.

"It makes a bad picture," said Khalad Sharhan, a resident in Baghdad&#8217;s Jihad neighborhood, where the Company E soldiers were working. "Everyone when they try to visit us, they feel like they&#8217;re in jail."

Years of war have kept Baghdad well-stocked with concertina wire. Capt. Mike Garling, the Company E commander, originally asked Iraqi workers to help clear it away, but he ended up turning the work over to his more-motivated platoons. The soldiers filled a whole parking lot with concertina wire they pulled out of the neighborhoods. Hauling it all away required eight dump truck loads, some packed so tightly that the soldiers had to use grappling hooks to pull the wire out again.

"Literally, it would take years to get rid of all the wire, but we got rid of most of the wire," Garling said.

Security is not going away with the wire gone. Dirt barricades, Hesco baskets and manned checkpoints still control traffic in and out of the areas that the soldiers are trying to clear.

But much of the wire had simply become litter over time and didn&#8217;t serve much purpose. The tangle that the Company E soldiers had to clear Friday night was sitting in an unusable pile in the middle of a field. They quickly decided they needed a bigger truck to come and haul it away.

Not all Iraqis are happy to see the wire go. Many use it to protect precious patches of grass from passing livestock or to secure their homes. Soldiers say some Iraqis claim to have bought the wire themselves. The soldiers tell those who complain that it belonged to the Americans first.

Garling, though, said the communities will look better with the wire gone, particularly since it has the nasty habit of catching trash that the wind blows by.