Afghan National Police officers leave a new command post set up by U.S. troops after being called to task for refusing to pull guard duty and not pulling their weight. They share the outpost with the Americans. (Dianna Cahn / S&S)

Afghan National Police officers leave a new command post set up by U.S. troops after being called to task for refusing to pull guard duty and not pulling their weight. They share the outpost with the Americans. (Dianna Cahn / S&S) 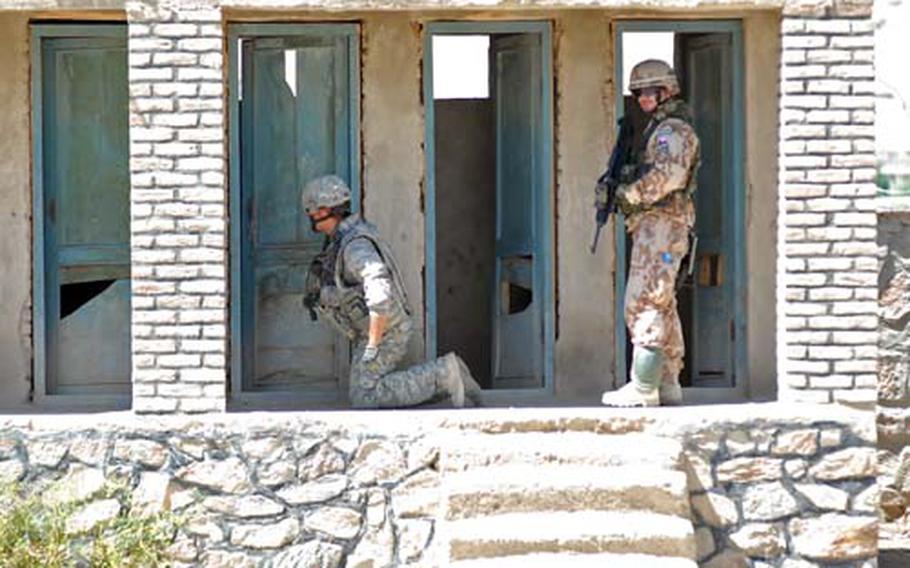 Bomb defusing operatives with Joint Task Force Paladin examine the booby-trapped door of a latrine at the school adjacent to a new command post set up by U.S. troops in Charkh district of Logar province. (Dianna Cahn / S&S) Charkh district police chief Allah Mohammad Mohsavidi peers at the booby-trapped door of a latrine at a school. The latrine is sometimes used by U.S. soldiers in the Charkh district of Logar province. The grenade was found the morning after Afghan National Police officers were called to task for refusing to pull guard duty and not pulling their weight in the new outpost they share with the Americans. (Dianna Cahn / S&S) 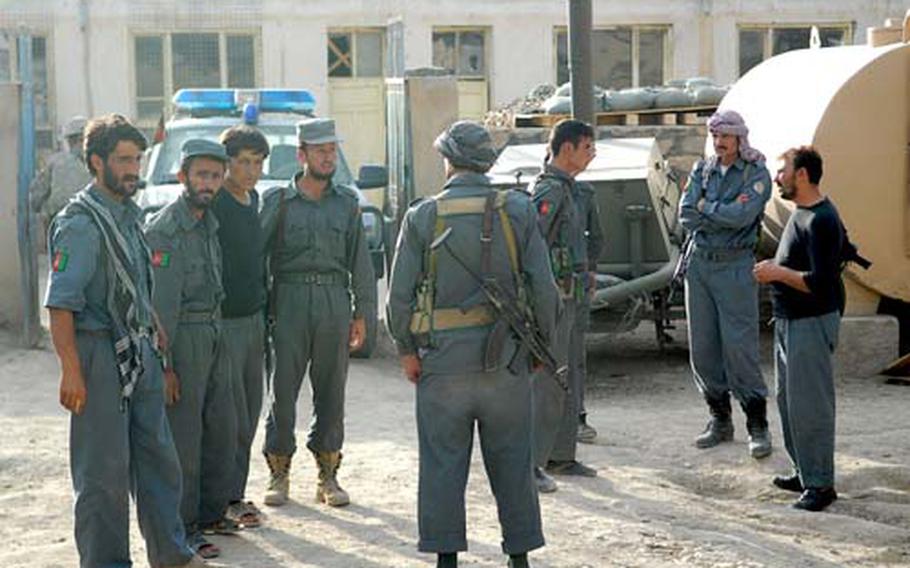 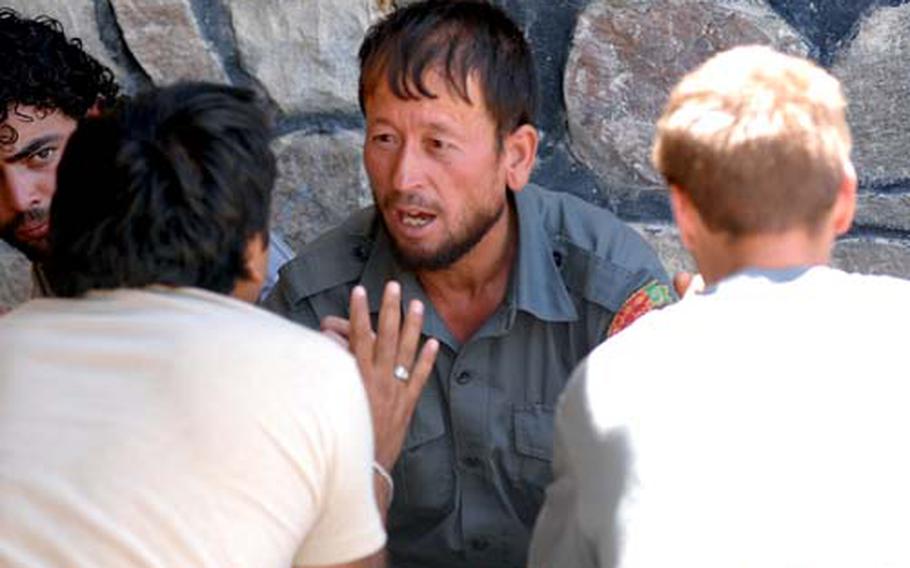 A soldier questions an Afghan National Police officer after a grenade was found on the door of a latrine. (Dianna Cahn / S&S)

The first sergeant stood in the courtyard of the U-shaped building, where his soldiers were relaxing on cots on covered porches at dusk, and barked an order.

It was a dramatic threat just two days after this new American outpost was set up alongside the local government building at the Charkh District Center. But Roome saw need for drama. His soldiers were sharing an unfortified new command post with an unreliable contingent of fledgling Afghan National Police officers who were not taking security detail seriously.

Roome didn&#8217;t carry out his threat, and the soldiers didn&#8217;t leave. But the next morning, the soldiers found that the door of a latrine that they sometimes use at a neighboring school had been booby-trapped with a grenade. No one was hurt and a crew from the bomb squad dismantled the trap.

Still, the incident left many of the Americans wondering how unreliable members of the ANP really were.

When soldiers from the 3rd Brigade Combat Team, 10th Mountain Division out of Fort Drum, N.Y., moved their command post to be near the district center last week, their goal was to move into the heart of the population and ultimately lure people&#8217;s support away from insurgents. Part of that task is to shore up the government and the Afghan security forces so civilians can believe they have an alternative to the Taliban.

But with the ANP, the Americans fear it&#8217;s two steps forward and one step back.

Soldiers complain that the police officers are corrupt, undisciplined and lazy. They are not always willing to join soldiers on patrol or to pull guard duty, and they reportedly demand food and other items from local shopkeepers, according to troops patrolling with them.

Staff Sgt. Lang Gureckis, 29, from Troop C, 3rd Squadron, 71st Cavalry Regiment, which was working with Company B, said he recently made an ANP officer walk back to the outpost alone after his interpreter saw him beating a shop owner.

The Afghan National Police is still developing its identity. The Americans say they would like to see something more akin to a policing unit in the States, or even state troopers, but top police administrators here frequently refer to their police officers as soldiers, and the units often see themselves more in a paramilitary position, fighting an armed enemy in combat.

ANP members are underpaid and lacking a proper model, but they could become a professional force over time, said Capt. Jason Wingert, 29, who commands the new Charkh District Center outpost.

Wingert was in Iraq in 2004 and again in 2005. When he left after his first deployment, there was no operating police force. But a year later, he came back and found a functioning national police, he said.

There have been some shining examples. Up the road from the district center, a second team of ANP work at a checkpoint at the Dabari Bridge. One of them, Gul Alam, was considered a hard-charging police officer who worked to fight the insurgents and set up the rule of law in Charkh.

When the insurgents planted a bomb at the bridge, killing Alam and four other ANP officers, the attack highlighted the challenges for the ANP.

Charkh Police Chief Allah Mohammad Mahsovidi likes to remind Americans here that the first time U.S. forces came to Charkh two years ago, they promised villagers all kinds of things. But they never came back, establishing a pattern of mistrust.

He said the Taliban scared off many of his officers with threats.

Still, he says, the American presence is having a positive effect. Security is better.

The Americans note that the police chief is doing his best with little backing. Many question the dedication of the sub-governor, Ghallam Farouq Hamayoon, who has family ties to a key insurgent in the area, according to squadron commander Lt. Col. Thomas Gukeisen.

At the Charkh District Center last week, Roome said he hoped that the booby-trapped latrine door was an indication that he&#8217;d gotten his point across.

A few days later, insurgents attacked a contracting crew working to expand the main road through the district center. The contractor&#8217;s own security crew fought back.

But when the Americans offered to go out and take care of the situation, Hamayoon said it was an Afghan problem and he sent the ANP, who helped fight off the attackers, saving three of the workers from capture, Gukeisen said.

One ANP truck was damaged by a rocket-propelled grenade, but there were no casualties.