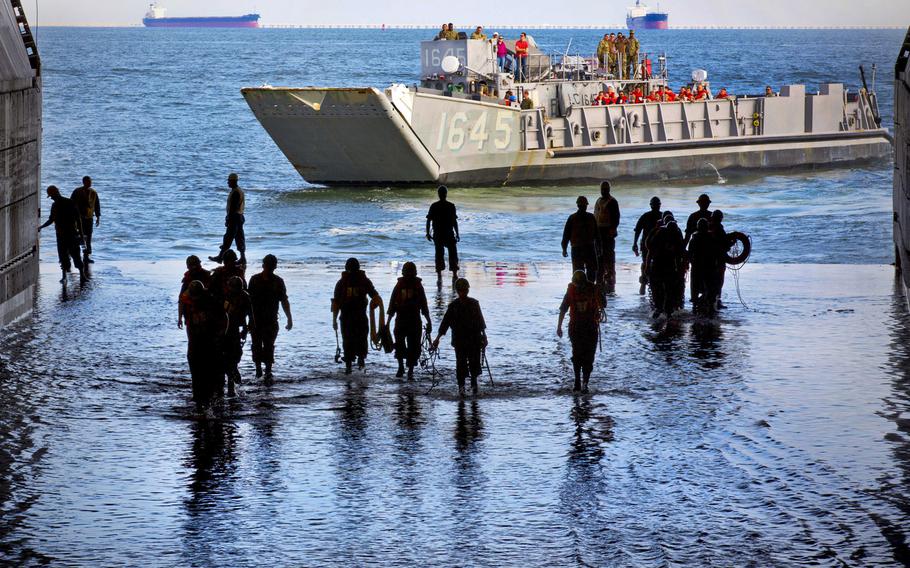 A landing craft utility departs the amphibious assault ship USS Kearsarge as sailors return to the ship's well deck on Sept. 19, 2014. Lengthy deployments and a risk-averse service culture are among the frustrations sailors face in the Navy, according to an independent survey led by a Navy pilot. (Travis DiPerna/U.S. Navy)

NAPLES, Italy — Lengthy deployments and a risk-averse service culture are among the frustrations sailors face in the Navy, according to an independent survey led by a Navy pilot.

More than 5,500 officers and enlisted sailors responded to an unofficial online poll in May as part of the 2014 Navy Retention Study, a project led by F/A-18 pilot Cmdr. Guy M. Snodgrass to understand why sailors, and officers in particular, leave the Navy early. The service is not involved with the project, although its personnel chief, Vice Adm. Bill Moran, has expressed interest in it and spoken with the project leaders.

A solid majority of respondents in the voluntary survey (62 percent) described the balance between work and home as “not ideal,” according to results released last month. Many described their last deployments as long (between seven and nine months), and just under half expected upcoming deployments to be just as lengthy or longer.

Majorities also said that senior leaders didn’t care what they thought and didn’t hold themselves accountable. They strongly believed the Navy was risk-averse and unable to stomach mistakes, and they held that performance rankings are based on factors other than merit.

“There are no quick ﬁxes,” the survey’s authors concluded. “Resolute and thoughtful changes are necessary to improve the factors that impact sailors the most.”

On the positive side, survey respondents reported they believed in their work and trusted subordinates and peers. Pluralities of enlisted and officer respondents said they wanted to retire from the service, with majorities citing benefits and pay as main factors for staying in.

Participants in the survey were self-selected, meaning there was no scientific sampling of sailors. It relied on participants to be honest about their active duty status, rank, length of service and commitment to take the survey only once. More than half of participants were officers, who represent less than 20 percent of all sailors.

The survey is posted online at www.dodretention.org, a website established by the survey authors. It encouraged participants to urge others to take the survey.

The survey group said it relied on help from active-duty sailors with experience conducting official Navy polls, as well as a statistician at the U.S. Naval War College to craft questions and remove bias. The group distributed the survey through military social media channels, keeping it open during all of May. More than 6,100 people responded, and more than 5,500 of the polls were considered complete enough to include in the results, according to a report accompanying the survey findings.

Cmdr. Chris Servello, a spokesman for Moran’s office, said that while survey results roughly mirror the command’s own polling, the authors draw different conclusions on some points. Recent benefit increases go against the report’s suggestion that Navy pay and benefits are declining, he said. In the past year, Moran’s office increased sea duty pay rates and added a high-tempo allowance for sailors at sea over 220 days. The Navy also kept tuition assistance at a 100 percent funding level and expanded eligibility for advancements at sea.

“Those were all meant to get after, one, incentivizing sea duty, which is where we need our folks,” Servello said, “and, two, it was meant to compensate folks for the longer deployments that we’re seeing.”

Navy leaders have said lengthy deployments are a concern as growing mission requirements combine with maintenance and funding issues to push ships to sea more frequently and for longer periods of time. Where deployments once averaged around six months, more are lasting seven to eight months, with carriers staying out even longer.

Fleet Forces Command, which determines deployment tempo, has unveiled a plan to stabilize tour lengths in the coming years.

The Navy has said less publicly about concerns touching on service culture, the capabilities of its commanders and perceptions held by junior officers, all areas of interest in the recent survey.

Earlier this year Snodgrass, now an executive officer for a fighter squadron in Japan, and others sent Moran a paper that argued that the Navy faced a manpower crisis in the near future unless it made substantial changes. Titled “Keep a Weather Eye on the Horizon,” it described a Navy culture growing rigid and top-heavy as an improving economy opened doors outside the service.

The paper recommended changing advancement opportunities, reducing administrative burdens and reinstating the critical-skills bonus for surface warfare and aviation commanding officers, a change the authors say would push officers at a critical juncture in their careers to remain for additional tours.

Authors of the current survey offer similar recommendations, as well as a request that the Navy “stop proactively highlighting” the firings of its commanding officers and command master chiefs. While Moran has agreed that retention could become an issue as the economy improves, he has said current numbers remain positive.

The survey report says that while the Navy is taking some steps to address issues, many issues require long-term attention.

“Retaining quality individuals is critical to the continued success of the U.S. Navy, as we cannot directly hire into positions of responsibility — we must promote from within,” it reads.