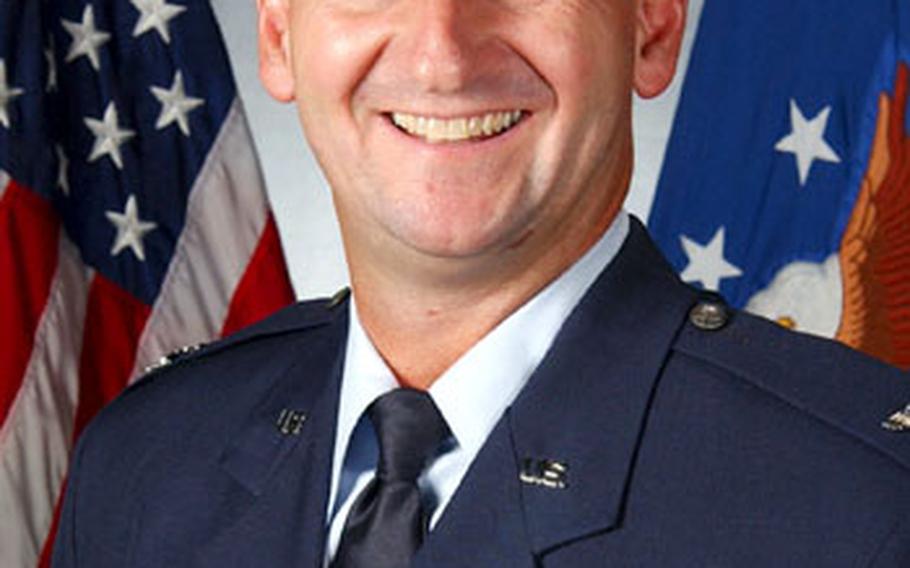 Col. Brent Baker, 18th Mission Support Group commander, is leaving in a few weeks to take over the vice commander position at Edwards Air Force Base, Calif. Replacing him will be Col. Max Kirschbaum, the outgoing deputy assistant chief of staff, engineer, at Yongsan Garrison in Korea. (Courtesy of U.S. Air Force)

In two years as Kadena&#8217;s point man with the Okinawan community, Col. Brent Baker has been on the receiving end of many goodwill gestures from local officials &#8212; as well as many of their protest declarations.

In a few weeks, the 18th Mission Support Group command&#8217;s crucial role in establishing relations with a community often critical of military operations will fall to Col. Max Kirschbaum, the outgoing deputy assistant chief of staff, engineer, at Yongsan Garrison in South Korea.

Baker will take over as vice commander of Edwards Air Force Base, Calif.

Kirschbaum is in for one of the military&#8217;s more unusual and visible mission support commands, Baker said.

At the upper echelons of military service, most officials say, politics play a greater role in both decision-making and the promotion process.

Interacting with community leaders also has given Baker an appreciation for the value of personal relationships.

Baker came into the job steeped in the military view that its actions were key to maintaining combat readiness.

But when Kadena Town Mayor Tokujitsu Miyagi came by his office to discuss the effect of ground-burst simulations on the local community, Baker said, he viewed Miyagi&#8217;s position as if he were mayor of an American town.

From then, the base began notifying local governments of ground-burst simulations.

Baker acknowledges, though, that the Air Force can&#8217;t make everyone happy all of the time.

Nonetheless, Miyagi praised Baker&#8217;s sincerity and responsiveness and said he hoped for more of the same from Kirschbaum.

&#8220;The military and the local community are in adversarial relations from time to time but we always have made efforts to calmly resolve any problems that arise, setting aside our emotions,&#8221; Miyagi said.

Local mayors have indicated they&#8217;ll look for similar efforts from Kirschbaum, who said he&#8217;ll follow a course similar to Baker&#8217;s in regard to local protests.

Kirschbaum said he also will focus on the more traditional aspects of a mission support group commander&#8217;s job.