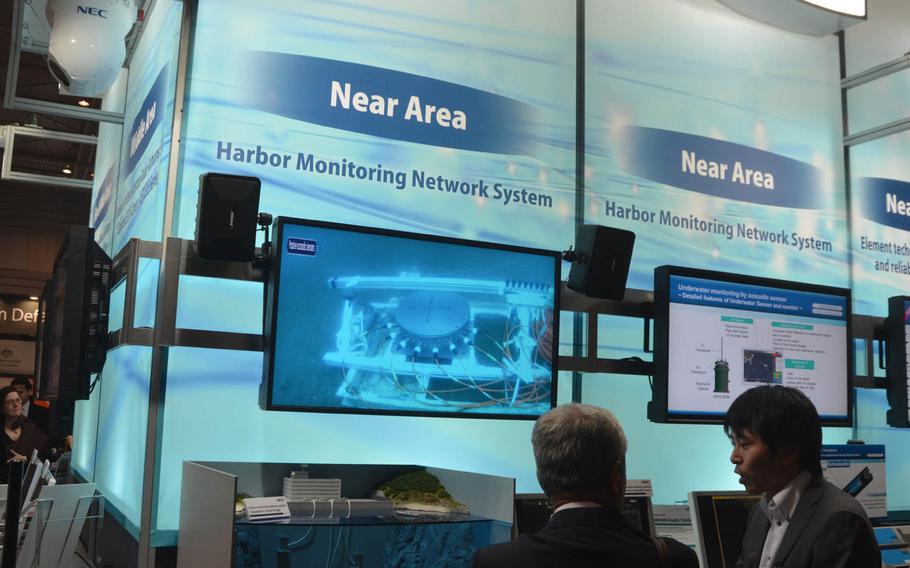 Buy Photo
Attendees discuss a harbor monitoring system at a pavilion at the MAST conference in Yokohama, Japan, Wednesday, March 13, 2015. The three-day conference included the U.S. 7th Fleet, the Japan Self-Defense Force and military officials from around the world. (Erik Slavin/Stars and Stripes)

Buy Photo
Attendees discuss a harbor monitoring system at a pavilion at the MAST conference in Yokohama, Japan, Wednesday, March 13, 2015. The three-day conference included the U.S. 7th Fleet, the Japan Self-Defense Force and military officials from around the world. (Erik Slavin/Stars and Stripes) 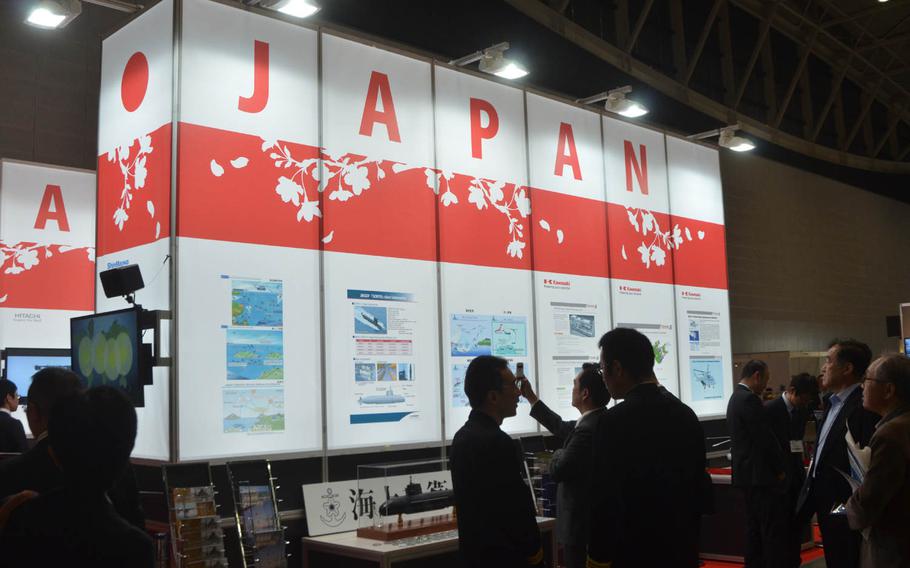 Buy Photo
A Japanese consortium of defense contractors presents its pavilion at the three-day MAST naval conference, which began on May 13, 2015. The international conference is the first of its kind to be held in Japan. (Erik Slavin/Stars and Stripes) 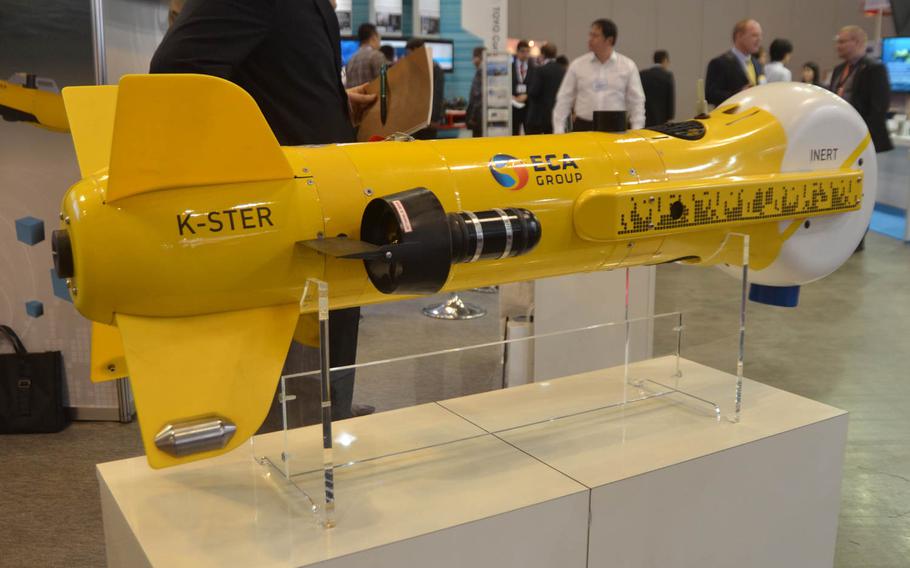 Buy Photo
A remotely controlled mine warfare vehicle is displayed at the MAST naval exhibition in Yokohama, Japan, Friday, May 15, 2015. Unmanned vehicles were a hot topic at the convention, which included the U.S. 7th Fleet and navies from around the world. (Erik Slavin/Stars and Stripes)

YOKOHAMA, Japan — Expect more robots and drones working over and under the world’s oceans, if the first Japan-hosted defense exhibition in recent history is any indication of global security’s near future.

Defense firms, all from countries on good terms with both the United States and Japan, pitched their latest technology on the exhibition floor of the three-day MAST (Maritime Systems and Technology) Asia conference to a wide audience of government and navy officials.

Contractors didn’t completely dispose with reminders that they’ll also sell airplanes and ship guns to anyone with the money and legal standing to buy them. But more often than not, a turn from one display to the next included a model of an unmanned mine detector or surveillance robot.

In the dozens of forums and academic symposiums happening in nearby rooms, unmanned vehicles on the ocean’s surface and below it garnered attention and scrutiny from European, Asian and U.S. senior officials alike.

“I think there is incredible potential with unmanned vehicles underwater,” said Rear Adm. Bill Merz, commander of the Yokosuka, Japan-based Submarine Group 7. “But the challenges are much harder” than aerial vehicles.

Communications with unmanned underwater vehicles are notoriously limited. Powering the vehicles long enough to make them tactically useful is another concern, Merz said.

The U.S. and Japan are working together on some of those problems. Last year, Japan announced it was spending $26 million over five years to develop an underwater vehicle fuel cell.

Multiple contractors at the exhibition said producing lighter, faster and more efficient drones, without driving costs too high, is a continuous goal.

U.S. contractor Hydroid, which produces what it calls “intelligent marine robots,” recently sent a vehicle on a 30-day test that wouldn’t have been possible more than a year ago. Other contractors are developing fuel cells with planned capacities for as much as 120 days at sea.

However, there are always tradeoffs involving payload, power and other factors.

Fotheringham notes that underwater drones can carry an advantage over the more publicized flying variety — no pilot is required. Autonomous versions can be programmed to execute a mission and return to a port without anyone remotely controlling them.

Defense planners like underwater drones because they are far cheaper to deploy in quantity than a $2 billion nuclear-powered Virginia class submarine.

By 2028, the U.S. submarine fleet is scheduled to shrink by 25 percent, as Cold War-era Los Angeles class submarines retire at a rate faster than the Virginia class budget can replace them.

While no one is suggesting that a robot can do everything a manned submarine can, Merz acknowledged they could eventually be called upon to fill multiple roles within the next decade.

A growing problem with underwater drones is they are rapidly increasing the amount of underwater traffic, which increases the potential for accidents. This is a lot easier to manage in the air, where most of what is flying isn’t trying to hide.

Undersea, nearly every piece of moving technology is trying to remain undetected.

“Globally managing traffic with submarines is kind of inherently contradictory to having a submarine,” Merz said.

The solution for the drawbacks of undersea drones is to use more of them on the surface, according to their respective advocates. They may not be as stealthy, but that isn’t always necessary.

“Unmanned surface vehicles have the advantage of almost always being able to fully communicate with them,” said Hans-Dieter Ehrenberg, of Germany’s Atlas Elektronik.

The U.S. Navy has also experimented with surface drones as weapons. Some of the early experiments in the 2000s didn’t go very well, Navy officials stated. For example, a Navy inflatable boat with Army missiles and guns bolted to it turned out to be unstable.

“We’re hearing more and more about trust,” said Vittorio Ricci, of the Naval Undersea Warfare Center. “Everybody has an image of Robocop going crazy and shooting everything, and that’s not a good thing.”

Newer experiments have solved many of the earlier accuracy, stability and latency problems, Ricci told conference attendees. In 2012, the Navy accurately fired six Rafael Spike missiles from a remotely controlled surface boat while defending against a small-boat swarm.

Ricci’s examples were among the few at MAST of a drone as a weapon. Very few western contractors featured offensive weapons at their exhibitions, and Japan’s major contractors — all of whom showed up — are used to supplying the defense-oriented Japanese forces.

The simple fact that Japan hosted an international security exhibition at all is new territory for a country with a prohibition against war written into its post-WWII constitution.

Such an event in Japan was unthinkable just a few years ago, said MAST chief Warren Edge, who has held similar conferences for about 20 years. It was only possible after Prime Minister Shinzo Abe’s government passed new rules allowing Japanese companies to sell their wares abroad.