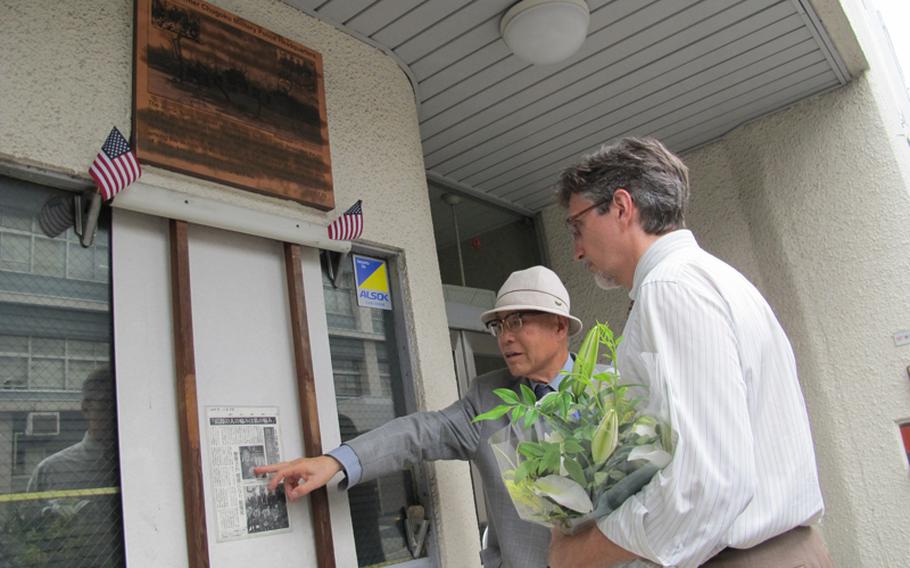 Shigeaki Mori, left, talks about the 12 U.S. servicemembers who perished in the atomic bombing of Hiroshima, Japan, on Aug. 6, 1945. With him at the site of the former Chugoku Military Police Headquarters is Clifton Truman Daniel, grandson of President Harry S. Truman. American POWs were kept there and most died in the bombing. Truman Daniel was in Hiroshima to offer reconciliation. Mori has spent his life researching Americans who died in the blast. He sought the help of Truman Daniel to have them be recognized at last. (Matthew M. Burke/ Stars and Stripes)

Shigeaki Mori, left, talks about the 12 U.S. servicemembers who perished in the atomic bombing of Hiroshima, Japan, on Aug. 6, 1945. With him at the site of the former Chugoku Military Police Headquarters is Clifton Truman Daniel, grandson of President Harry S. Truman. American POWs were kept there and most died in the bombing. Truman Daniel was in Hiroshima to offer reconciliation. Mori has spent his life researching Americans who died in the blast. He sought the help of Truman Daniel to have them be recognized at last. (Matthew M. Burke/ Stars and Stripes) 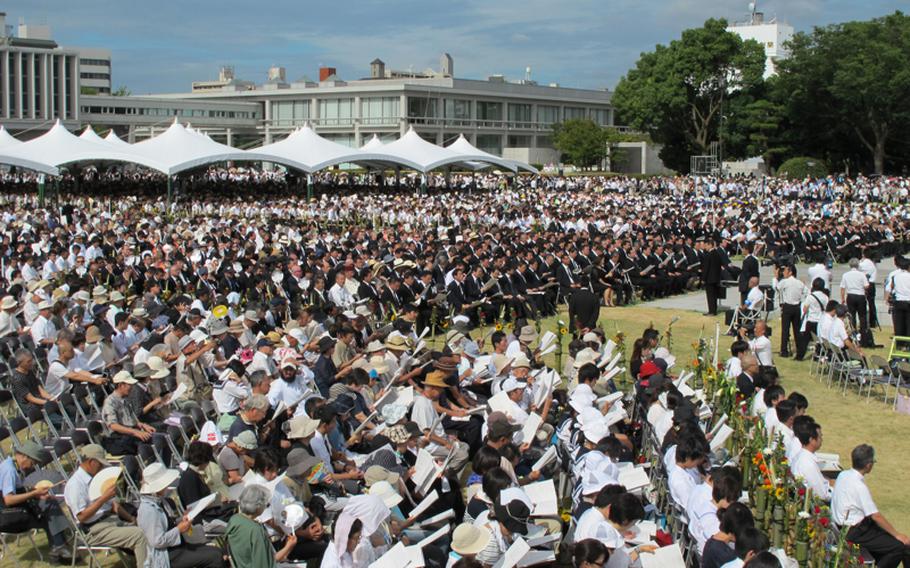 There were 50,000 in attendance at Peace Memorial Park in Hiroshima, Japan, on Monday morning to commemorate the 67th anniversary of the atomic bombing that killed 140,000 people, including 12 American servicemembers held captive in the city. (Matthew M. Burke/ Stars and Stripes) 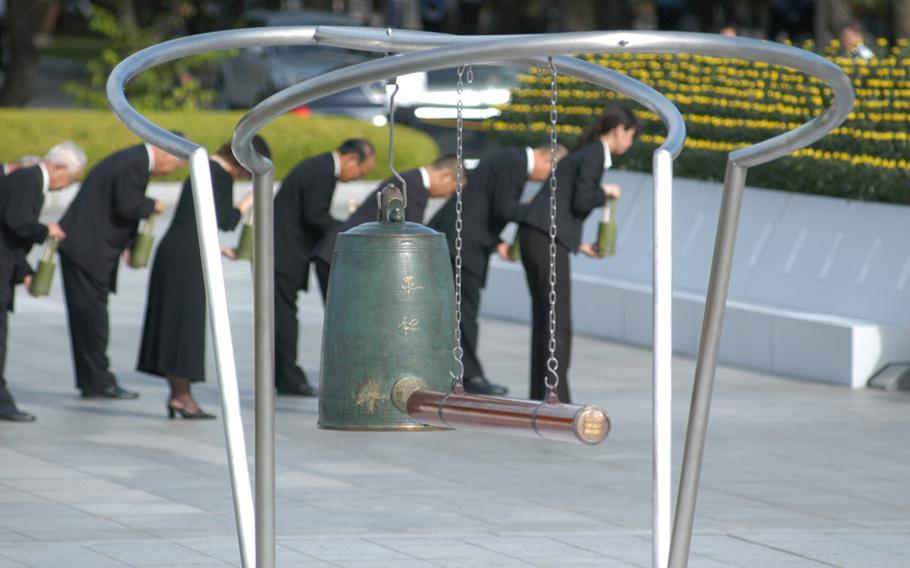 Water from all over Hiroshima, Japan, is offered Monday to quench the thirst of the 140,000 victims of the first atomic bombing in human history, on Aug. 6, 1945. The bell that would later be rung at the exact time the bomb fell sits in the foreground. (Matthew M. Burke/ Stars and Stripes) 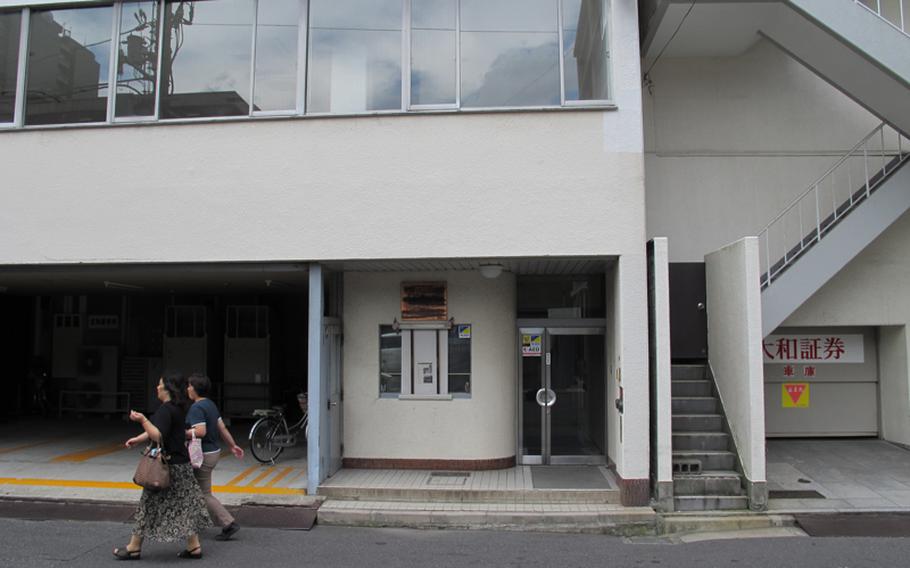 Unbeknownst to most in Hiroshima, Japan, and in the United States, 12 American servicemembers died in the Aug. 6, 1945, atomic bombing of the city. Here, hidden from view, is a plaque honoring the men outside a building that now sits at the site of the Chugoku Military Police Headquarters where the men were held as POWs and where many perished. (Matthew M. Burke/ Stars and Stripes) 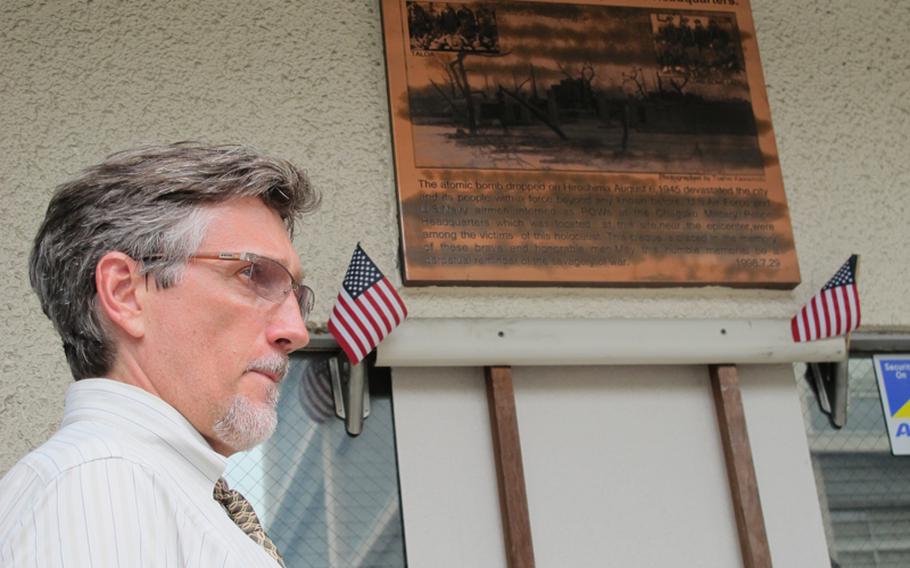 Clifton Truman Daniel, grandson of President Harry S. Truman, is moved Monday by a little known plaque honoring 12 American servicemembers who were POWs in Hiroshima, Japan, when the city was hit by a nuclear bomb on Aug. 6, 1945. Truman Daniel had come to Hiroshima to pay his respects and offer reconciliation. (Matthew M. Burke/ Stars and Stripes)

HIROSHIMA, Japan &mdash; Shigeaki Mori was only 7 when Hiroshima was flattened in seconds. Clifton Truman Daniel hadn&rsquo;t even been born when his grandfather, President Harry Truman, made the decision to drop the atomic bomb on the Japanese city.

On Monday, the two men met as Hiroshima marked the 67th anniversary of the Aug. 6, 1945, bombing &mdash; Truman Daniel drawn by a longing for reconciliation, and Mori driven by a decades-long mission to identify and honor 12 American prisoners of war who were among the 140,000 fatalities from the blast and its aftermath.

Shortly after tens of thousands of people gathered at the Peace Memorial Park to remember long-dead loved ones, Truman Daniel visited Mori, who spent his own time and money to erect a plaque nearby honoring the U.S. servicemen, whose own families didn&rsquo;t know for decades they had died when a nuclear bomb was used as a weapon of destruction for the first time.

&ldquo;We&rsquo;re not looking to reopen old wounds,&rdquo; Truman Daniel, 55, said of his family and Japanese hosts, adding that the goal was to do what they can &ldquo;to make sure we don&rsquo;t do it again.&rdquo;

Truman Daniel said his hosts from Sadako Legacy, a nonprofit organization working to spread peace in the name of the atomic bomb victims, allowed him to be &ldquo;faithful&rdquo; to his grandfather and country while being respectful to the Japanese.

The two men first met at a local school to talk to students. Then, Truman Daniel&rsquo;s family and Mori piled into a van and headed for the site where Chugoku Military Police Headquarters, less than a mile from the blast&rsquo;s hypocenter, was reduced to rubble 67 years ago. Today, an office building sits on the site.

Away from the megaphones and drums of protest groups, the plaque is in an alcove at the rear of the building, flanked by two small American flags. Passersby said very few Hiroshima residents know about the American POWs who died there or the marker that honors them.

Neither do many Americans, Mori said. The full 12 have never been fully recognized by the U.S. government.

Mori survived the bombing by sheer luck. The elementary school he had been attending was across the street from the Imperial Army&rsquo;s Military Headquarters, where the Americans were detained. But he had moved to another school in the suburbs only a few days before the bombing, keeping him from exposure to the blast.

He grew up to be a historian, devoting research to the tragedy that hit his hometown in the final stages of World War II.

About 40 years ago, he was shocked to learn that the bombing&rsquo;s casualties included Americans. Then he heard a media report in 1990 that the daughter of Sgt. Hugh Atkinson, one of the 12 U.S. victims, had visited Hiroshima, looking for information on her father&rsquo;s fate.

&ldquo;This news convinced me again that for the families, the sorrow of the loss of their loved ones had yet to be healed, and closure had yet to come,&rdquo; he said.

Mori dedicated his life to finding the truth. What he was able to discover went beyond what even the U.S. government had acknowledged.

Nine days before the crew of a B-29 named Enola Gay dropped the bomb, the U.S. military launched a fierce air raid on the city of Kure, west of Hiroshima, where munitions factories were located and major warships were anchored, Mori said. Most of the ships were destroyed, leaving the Japanese Imperial fleet there incapacitated.

&ldquo;During the exchange of fire between the air and ground, however, a total of 22 U.S. aircraft were shot down,&rdquo; he said. Many of the crewmen died, while others parachuted out, only to be taken prisoner. Mori tracked down witnesses who saw the Americans when they were captured, while they were detained or when they were lying badly injured at a bridge pending evacuation following the bombing.

Bit by bit, he built documentation that 12 American servicemembers had died from the bombing. The families of only three &mdash; Staff Sgt. Ralph Neal, Airman 3rd Class Normand Brissette and 2nd Lt. James Ryan &mdash; were informed of how they died.

Among those kept in the dark was Shirley Morehead, who still recalls the day she got to her grandmother&rsquo;s house and found out that her beloved uncle, Air Force Staff Sgt. Charles Baumgartner Jr., from Sebring, Ohio, had gone missing in the Pacific in the waning days of the war.

&ldquo;That was a terrible day,&rdquo; Morehead, now 85 and living in Canton, Ohio, said by phone last week. &ldquo;I haven&rsquo;t gotten over it yet.

Baumgartner was the ball-turret gunner of the B-24 bomber Taloa, which took off from Yomitan Airfield on Okinawa on July 28, 1945, to attack the Japanese warship Haruna. The bomber was shot down with its crew of 11 over a mountain west of Hiroshima.

Six crewmembers died in the crash, while the rest parachuted out. Two were then killed and three, including Baumgartner, were captured and taken to the police building in central Hiroshima.

Mori set about adding the names of the 12 U.S. servicemembers to the official registry book kept at the Hiroshima Memorial Hall for Atomic Bomb Victims, and at the Hall of Remembrance, where the names and photos of the victims are displayed.

It took years before he was able to track down the families of all 12, finishing in July 2009.

Now, on each anniversary of the bombing, Mori visits the modest plaque he had made.

This time, he was joined by Truman Daniel, who placed flowers underneath the plaque and bowed his head in silent prayer. Mori said the victims would be comforted knowing that fellow Americans had come to pay their respects.