Unknown when new Stryker armor will be available 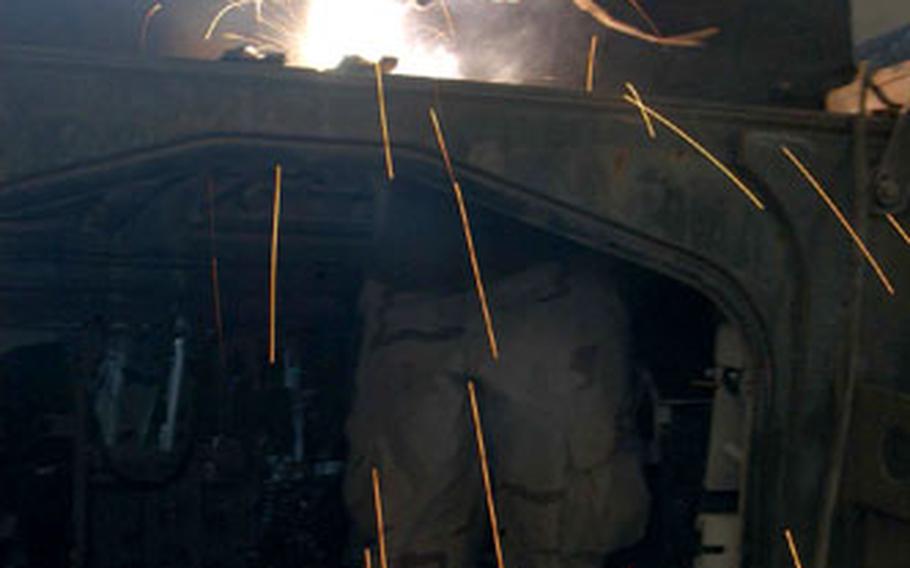 ARLINGTON, Va. &#8212; New armor for the Army&#8217;s Stryker fighting vehicles is still being developed and it is not known when it will be made available, military officials said.

The equipment is &#8220;taking some time&#8221; in development, with the aim being to keep the weight down while maintaining effectiveness, said Col. Robert B. Brown, commander of the 1st Brigade 25th Infantry Division Stryker Brigade in Iraq.

The Army decided in 2003 that the Stryker should have &#8220;reactive armor,&#8221; a high-tech surface that explodes on impact deflecting the blast and the projectile.

Currently, &#8220;cage&#8221; armor, designed to protect Strykers from rocket propelled grenades, is effective but makes the vehicle as wide as an M1 tank, limiting its agility, Brown told Stars and Stripes on Sunday.

Strykers first saw combat in late 2003, in northern Iraq. Prior to deploying, the light-armored fighting vehicles were equipped with a cagelike &#8220;slat&#8221; armor designed to catch RPG rounds so they explode away from the vehicles.

But a December 2004 report from the Center for Army Lessons Learned found the add-on armor caused the Strykers to roll over and did not protect exposed personnel from RPG shrapnel.

Neither reactive armor nor slat armor protects exposed personnel. But the 25th ID helped develop the Combat Ballistic Shield, which goes around the back hatches and has a bullet-proof window for vision, said Brown.

In a Sunday e-mail, Brown rebutted the CALL report, saying his unit had experienced no rollovers due to the slat armor.

&#8220;The rollovers we had would have occurred with or without slat,&#8221; Brown wrote. &#8220;I believe some Stryker rollovers have occurred due to the slat being top heavy, but we have not experienced this as we learned from other units and practiced extensively with slat prior to the deployment.&#8221;

Still, the slat armor adds considerable bulk to the Stryker: about 2.5 tons and about 3 feet in width, according to published reports.

In a telephone interview, Ray said she could not say how long it would take to equip the Strykers with the new armor.

Asked how the heavier armor would affect the Strykers&#8217; mobility, she said the Army would never do anything to compromise the vehicle&#8217;s speed and mobility.

The armor is not the same configuration as the reactive armor already on the Bradley fighting vehicle, &#8220;so this was a new testing and production line,&#8221; Ray said.

&#8220;As I understand it, the reactive armor is taking some time to develop to the standards desired,&#8221; Brown wrote. &#8220;They are trying to keep the weight down as much as possible and still keep it effective against anti-armor weapons systems.&#8221;

One of the Stryker&#8217;s requirements is that it can be transported on a C-130 if needed, said Don Jarosz, a spokesman for the U.S. Army Tank Automative Command.

Col. Peter Fuller, Stryker project manager, noted that transporting on a C-130 with either slat or reactive armor &#8220;is an issue with the volume or width of the aircraft.&#8221;

Last week, Brown told reporters that the Strykers have performed extremely well in Iraq with the slat armor saving hundreds of his soldiers&#8217; lives.

He said the brigade was hit by 84 suicide car bombs, but most of the soldiers in Strykers walked away uninjured.

The Strykers have also sustained 115 RPG hits without a single round penetrating the vehicles&#8217; armor. The only soldier killed in an RPG attack was in an open hatch, Brown said.

&#8220;Go ask any soldier which vehicle they would prefer to ride in and they would choose a Stryker, I guarantee it,&#8221; Brown said.

Reactive armor is based on simple physics: Dispersing the impact of a projectile, so that the force is spread over a large area of the structure behind the reactive armor, will reduce penetration.

Protection by explosive modules was deployed by the Israel Defense Forces in the late 1970s, and later, by the Russian Army by the mid-1980s.

The basic reactive armor uses thin metal plates and a sloped explosive sheath, which explodes when sensing an impact of an explosive charge, such as anti-tank missiles. The angle of the plates deflects the incoming round.

Other ideas, not part of the current retrofit, include a &#8220;Smart Armor&#8221; concept that will have sensors and microprocessors embedded in the armor that which will sense the location, type, velocity and diameter of the projectile and trigger smaller explosive elements, to form an effect tailored against that specific penetrator.

Another idea is the &#8220;Momentum Transfer Armor.&#8221; The system will be activated by threat-warning sensors that will detect an incoming projectile and launch a small steel bar in a direction perpendicular to the flight-path of the approaching threat, intercepting it.