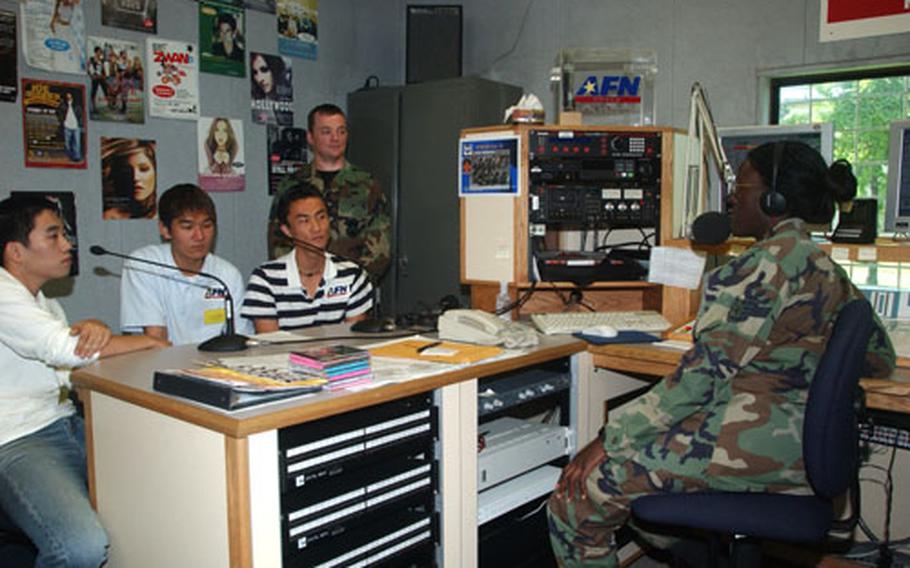 For what is believed to be the first time, South Korean university students are getting an up-close look at what their U.S. military counterparts do daily.

All this week, eight students from area universities shadowed airmen at Kunsan Air Base, focusing on one of four fields: operations, maintenance, medical or mission support.

&#8220;I know that they are making a push to have us throw out doubts about the military being here,&#8221; said Kim Jung-pung, a 25-year-old environmental engineering student from Kunsan National University. &#8220;I have been especially impressed with the environmental control and the way they treat their facilities. I am also impressed with their system of managing documents.&#8221;

Kim, who also served a stint in the South Korean military, said he&#8217;s learning methods that will help in his field. &#8220;It is helpful for me in my studies, and for all the students, it is a help to exercise our English and expose ourselves to new experiences,&#8221; he said.

Another student, Lee Joo-hyun, from Howon University in Kunsan, has shadowed members of the operations group; a highlight of his week was a Humvee ride to an explosive ordnance disposal site.

Lee, like the other students, was chosen by his university&#8217;s administration. Part of his charge is to return and share his experience with other students.

The American guides indicated the week has been equally interesting for them.

&#8220;This is the first time the program is being done, so there are still some things we&#8217;re trying to feel out,&#8221; said Lt. Nate Mcleod-Hughes of the 8th Logistics Readiness Squadron. &#8220;But it&#8217;s a great chance to have better community relations and a great chance for the Koreans to see how we live and what we do.

Kunsan officials hope the program can be replicated throughout South Korea.

&#8220;It&#8217;s really the first of its kind because the other programs are focused on elementary or high school students and not really at the university level,&#8221; said Capt. Krista Carlos, an 8th Fighter Wing spokeswoman.

&#8220;We hope this will be the benchmark for future programs throughout the peninsula.&#8221;

And so far, the program has been a success.

&#8220;We can be good messengers to our community and to our friends, to give a true impression of the air base,&#8221; said Kim, the Kunsan National University student.