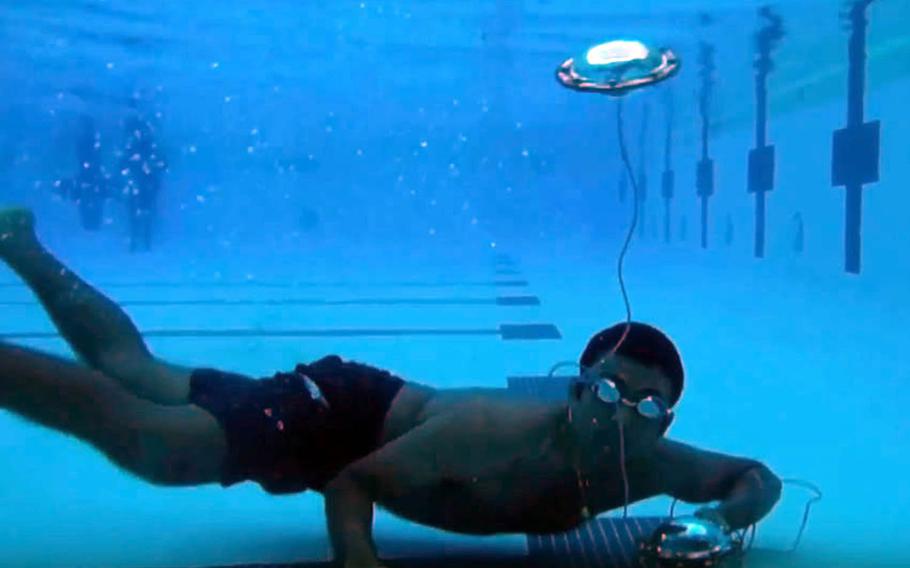 A member of Team AquaLink conducts an underwater test on an experimental GPS buoy as part of the Hacking for Defense course at Stanford University. (Courtesy of Team AquaLink)

A member of Team AquaLink conducts an underwater test on an experimental GPS buoy as part of the Hacking for Defense course at Stanford University. (Courtesy of Team AquaLink) 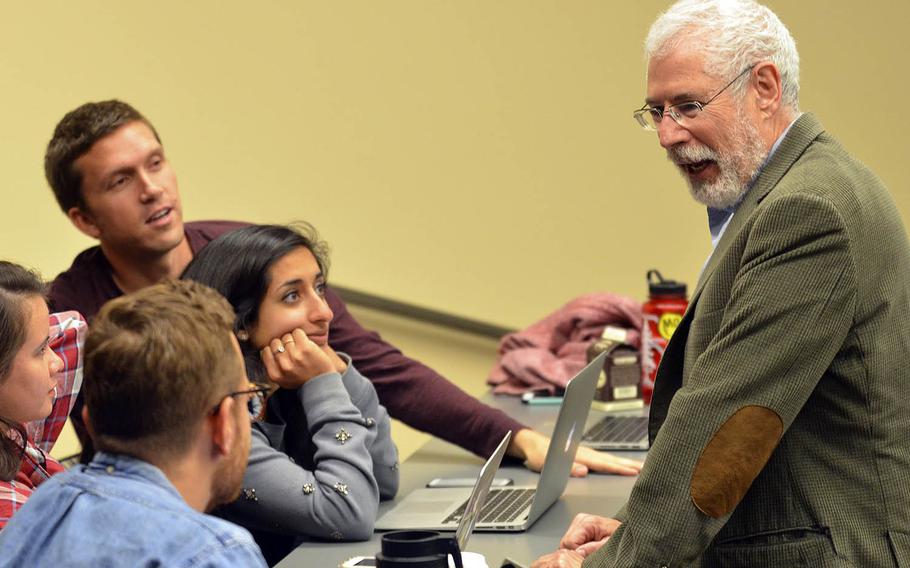 Steve Blank talks with students in Stanford University's first Hacking for Defense class in the spring of 2016. The course will be offered at 22 universities in the coming year. (Courtesy of Stanford News Service)

Before blossoming into a Silicon Valley startup guru, Steve Blank spent four years as an electronics technician in the Air Force, including a stint working on fighter jets in Thailand at the tail end of the Vietnam War.

In the decades since, Blank has founded or worked with eight startup companies in Silicon Valley, including co-founding software developer E.piphany. He’s a godfather of the “Lean Startup” movement — a methodology that helps get products into the hands of customers sooner by understanding that startup firms are not simply smaller versions of big companies — and he teaches entrepreneurial innovation at Stanford University’s engineering school in California.

In all those years since leaving the Air Force, Blank has lamented what he sees as the ever-widening gap between American civilians and their military.

“We’ve run a 44-year national experiment on what happens when you disconnect the populace from any skin in the game in foreign policy,” said Blank, alluding to the end of the American draft in 1973. “Some dumb kids from the South want to join the military and get shot? Hey, you know, we don’t know any of those people. We don’t care.

“I think that’s been a disaster for our country. I’ve always thought that — but more so now because here I am teaching the most elite engineering students in the country, and they don’t even know what the government does.”

Blank’s effort to get college kids more connected with the military is “Hacking for Defense,” a university course that challenges top engineering students with some of the myriad problems confronting the U.S. military and intelligence community. He launched the course at Stanford in 2016, and it is now offered at 11 universities in the nation, including Columbia University in New York and the University of Pittsburgh, Blank said. It will be offered at 22 universities in the coming academic year.

The course’s name refers not to stealthy intrusion into computers, but rather to students infusing the Defense Department with fresh ideas, he said.

He co-founded the course with Peter Newell and Joe Felter, both former Army colonels. In 2014, Newell and Felter started the Palo Alto-based BMNT Partners, which focuses on soliciting the military for problems needing solutions. (The company’s name comes from the military phrase “begin morning nautical twilight,” which is the pre-dawn period optimal for an offensive.)

Newell had become an innovative problem-solver as director of the Army’s Rapid Equipping Force from 2010 to 2013 in Afghanistan, most notably getting small forward-operating bases completely off the grid by generating their own power and reusing water.

Blank had begun teaching a class called “Lean Launchpad” in 2011 at Stanford and the University of California-Berkeley, which fostered the quick development of products based on early and continued customer feedback.

Upon meeting a few years ago, the three men quickly realized they shared a goal.

In keeping with that, Newell’s BMNT works within the DOD to pinpoint problems, and university students search for solutions during the 10-week course.

After establishing hypotheses about the problem they are tackling, students spend weeks in the field interviewing anyone who might have useful knowledge. The teams then develop a “minimal viable product” that solves the problem, he said.

But the “customer discovery” phase is key to innovation, he said.

For example, at a Hacking for Defense course at Georgetown University this spring, one student team visited Andrews Air Force Base and Pax Naval Air Station, both in Maryland, during a two-week period to develop a solution for keeping pilots hydrated for 28 days in case they are shot down.

They interviewed flight attendants, air-flight equipment personnel, pilots, parachute riggers and experts in SERE, or survival, evasion, resistance and escape. They sat in the cockpits of an F-16 jet and a Seahawk helicopter to feel the space constraints on pilots. They examined the contents of current survival kits.

In this way, students were able to bore down to the core problem and avoid getting sidetracked by “symptoms” of the primary problem, Blank said.

Their solution, HydrAlive, was a portable water-generating device that uses an advanced metal-organic amalgam that can absorb moisture from the air.

One of Blank’s favorite examples of this learning curve was a problem posed by the medical director of the Navy SEALS. The special operators were experiencing long-term health effects from spending too much time under water, so the medical director was looking for a feasible method for the divers to carry monitors to measure levels of toxic gas.

Blank’s Stanford students went out and talked to SEALs and very soon found out that many of them were spending so much time under water because they often would lose their way.

GPS pretty much stopped working 4 feet below the water, the students were told, and compasses often were compromised by seabed ore.

The solution they developed was not a gas monitor, but rather a GPS buoy, dubbed AquaLink, that surfaces within 10 seconds and keeps the divers on track, Blank said. That way, they’d spend less time under water.

“The problem was never the problem,” he said.

The Department of Defense’s acquisition system, however, “is not built to do problem recognition,” Newell said. Too often there is a rush to write a requirement — which is the authority to spend money — before the core problem is understood, he said.

That disconnect widened after the end of the Cold War in the early 1990s, after which ties between the Pentagon and university researchers began to ebb, said Andrew Hunter, an expert in emerging military technology at the Center for Strategic and International Studies in Washington and a mentor for the Georgetown “Hacking for Defense” students.

“‘Hacking for Defense’ is a model for rebuilding that connection because you get people in the government who have technical problems and people in the university settings who are just setting out in their careers who could be the industry titans of tomorrow,” he said.

“I think it’s very positive, with very good interactions for both sides.”

It also has the potential to grow, he said.

“As it expands to more universities, you could get to the point of thousands of students going through the program on an annual basis,” he said. “At that level you’d have a real meaningful impact, not a one-off.”

"Hacking for Defense" has exceeded Blank’s hope to get students more involved as citizens.

The program has already led to the founding of eight companies, while many other promising solutions have attracted investors.

“Forty percent of students are still working with their military counterparts after classes end,” Blank said. “I never expected I’d be recruiting.”