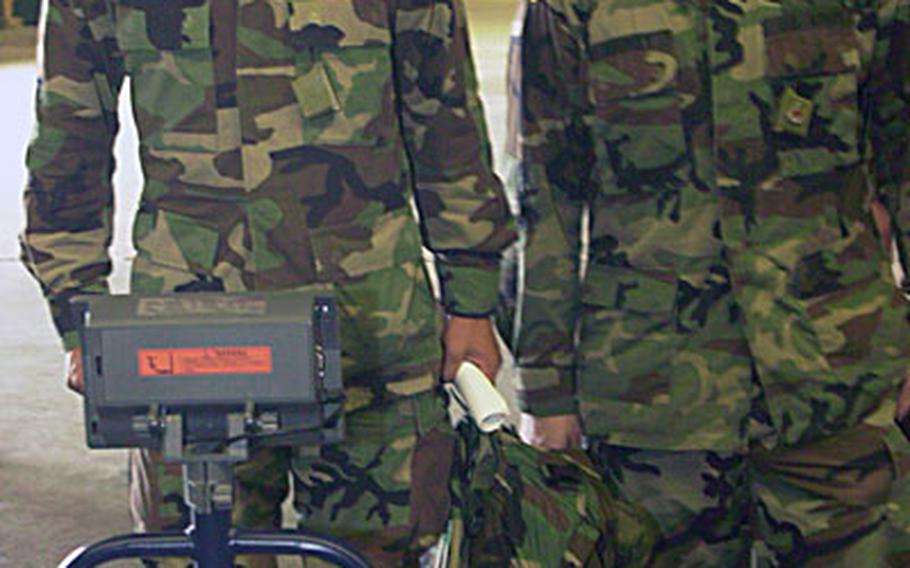 Spc. Michael Everist, right, a member of the V Corps Quartermaster battalion, checks the weight of Army Maj. Bob Gahol of the 212th Mobile Army Surgical Hospital, before Gahol boarded a C-130 for Angola and MEDFLAG 2005, a multi-service exercise that begins next week. (Terry Boyd / S&S)

MEISAU, Germany &#8212; Up and running since 2 a.m., Lt. Col. Ann Sammartino apologized for being a little fatigued midmorning Saturday.

The deputy commander of nurses and a nurse/anesthetist gathered in the Meisau Army Depot gym with a few other of the 150 soldiers and officers from the Meisau-based 212th Mobile Army Surgical Hospital who are deploying to Angola.

At nearby Rhine Ordnance Barracks, gear-laden soldiers and airmen from other units were weighing in, waiting to board planes.

Early next week, they&#8217;ll all unite at a base camp in Mbriz, 180 miles north of Luanda, the capital of Angola, for MEDFLAG 2005 in that central African nation.

The three-phase humanitarian operation, held annually somewhere in Africa, runs Tuesday through Sept. 23. It combines a dozen disciplines and spans a grueling schedule of surgery, exercises and medical assistance.

The first phase will bring together Americans and Angolans for a two-day mass casualty exercise based on an earthquake/tsunami scenario, Sammartino said.

That will be followed by a four-day period in which 212th personnel plan to see between 80 and 100 surgical patients. Sammartino, who attended a similar exercise in Sri Lanka where Americans performed 160 surgeries on locals wounded in the Sri Lanken civil war, said &#8220;You worked around the clock. It was go, go, go.&#8221;

The final phase will be a medical civic action program, or MEDCAP, in which the 212th will treat Angolans in the remote villages of Ambriz, Loge Grande and Capulo, she said.

In addition to the 212th&#8217;s medical care &#8212; which will include optometry and women and infant care &#8212; the Giebelstadt-based 523rd Dental Company will provide services such as pulling teeth, correcting cleft lips and other oral surgery, said Maj. Robert Piotrowski, 212th deputy chief, clinical services.

Other units participating in the exercise include:

Engineers from a Minnesota Army Reserve unit and communications specialists from the New York National Guard.An Air Force Crisis Response Group from Ramstein Air Base, which handles water purification for hospital hand-washing and instrument sterilization.The Center for Health Promotion and Preventative Medicine- Europe, which has already surveyed the site.Five reservists from the Utah-based 300th Military Intelligence (Linguist) Brigade to translate between Portuguese and English.For one of the participants, the exercise will be provide vital experience working in the operating room, said Spc. Jordan Ratliff, 20, from Columbia, S.C.

Ratliff, an operating room/anesthetist technician, said he expects to be racing around, trying to keep doctors and nurses supplied with need equipment.