United says military families worldwide can ship pets back to US, but for how long remains uncertain 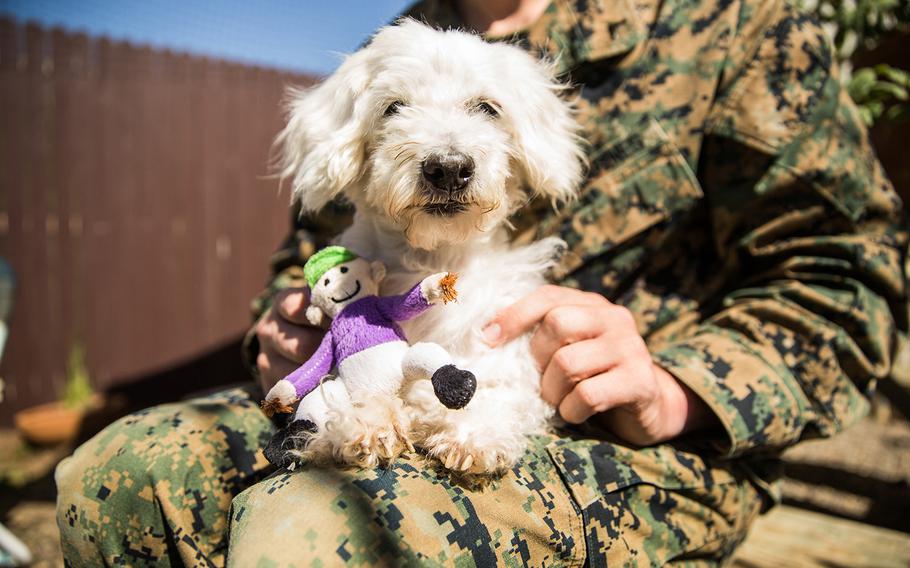 Military members and families moving back to the U.S. that used United to fly pets overseas will now be able to fly them back on the airline, regardless of the carrier's stricter pet travel rules that ban some 25 breeds of dogs and cats starting in June. (Stephen Beard/U.S. Marine Corps)

All U.S. military families overseas — regardless of where they are stationed — are eligible to use United Airlines to fly their pets to the States under an exception to policy for military members announced by the carrier and the Defense Department this week.

“We want to be fair and we want to work with them and we feel that the right approach is, if we flew your animal overseas, we will fly it back,” United spokesman Charles Hobart told Stars and Stripes on Wednesday.

Hobart said that official military orders aren’t required — that a military spouse, for example, could travel with a pet before a permanent change of station date to get an animal back to the States as soon as possible.

Still up in the air, however, is for how long the exception will be granted.

As of now, eligible military members can make reservations to fly their pets back home through June 17, Hobart said, including breeds that will soon go on United’s restricted list.

June 18 is when the airline will begin accepting new pet reservations from the general public under a stricter pet transportation policy that bans 25 breeds of dogs and cats from traveling as checked baggage in the cargo hold. The new policy also limits an animal’s crate size to 30 inches in height, which effectively blocks some large dog breeds from travel. Those moving overseas with pets will not be able to take them on United if they do not meet the airline’s stricter requirements.

U.S. Forces Japan officials said this week that there would be a three-week halt in new pet reservations from June 18 to July 8.

Hobart said United’s intent is to be able to resume transporting military pets after that pause, but the airline is still working through its processes to be able to do so.

To continue to fly breeds of animals no longer allowed back to the U.S. after June 18, United has to ensure its pet reservations system can accept individual overrides, Hobart said.

“We are going to work to adjust our system in order to make sure we can accept those restricted breeds,” he said. “As of now, we can only fly those pets back home prior” to June 18.

In the meantime, United is “working to get as many (pets) home as we can prior to” the cutoff, Hobart said.

In March, United suspended new reservations for pets traveling in cargo after several highly publicized incidents, including the death of a puppy in an overhead bin and the misrouting of a dog.

After reviewing its PetSafe program, it announced earlier this month that it would ban certain short- or snub-nosed breeds that are more prone to breathing difficulties at higher altitudes, such as bulldogs, pugs, boxers, pit bulls, Shih Tzus, and Persian and Himalayan cats.

The temporary suspension of pet reservations and stricter rules caused panic among many pet-owning military members overseas preparing to move back to the States this spring and summer. The military offers only a limited number of pet spaces on its contracted Patriot Express flights, and United accepted more higher-risk dog breeds and transported more animals than the other U.S. carriers. Military members exploring options using foreign carriers in some locations reported exorbitant rates that some said they couldn’t afford. In Guam, where pets can’t travel by Patriot Express, United is the only major U.S.-based carrier serving routes to the mainland.

Military members overseas eligible to use United to fly their pets back to the States between now and June 18 need to fill out an online form available at www.usfj.mil. The form can then be emailed to Petsafe.

“As soon as we get that form, we’ll work with that individual to see if we can get their pet back home,” Hobart said.