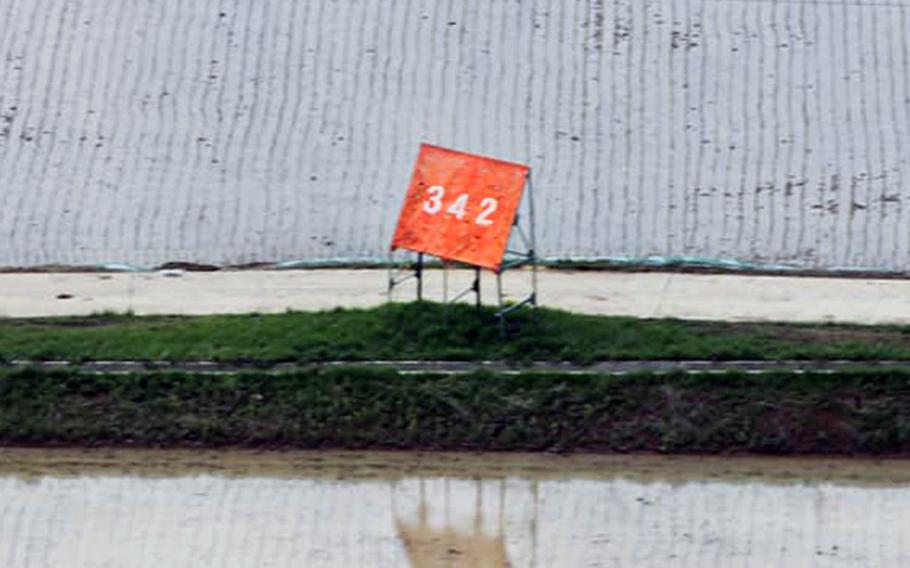 The U.N. Command announced May 22, 2020, that it found defects on warning markers like this one meant to keep aircraft from flying mistakenly into the Demilitarized Zone that separates the two Koreas. (Facebook)

The discovery came after the U.N. Command, which oversees the Demilitarized Zone, sent staff to fly the length of the southern boundary to verify that the 877 markers were intact and visible.

“These 877 markers across the Peninsula serve as visual aids to aircrew so they do not mistakenly fly into the #DMZ & #DPRK,” the U,N. Command said on its Facebook page, using the acronym for North Korea’s official name, the Democratic People’s Republic of Korea.

It said the survey “revealed several deficiencies,” and posted photos of the red, numbered markers pockmarked with holes and partially hidden by overgrown foliage.

“We will now work with our (South Korean) counterparts to restore bad markers to useful condition,” the U.N. Command said.

The probe was launched after a special investigation team “identified a deficiency that contributed to a potential aviation incident involving a civilian aircraft last year,” the U.N. Command said.

The U.N. Command is tasked with enforcing the armistice that ended the 1950-53 Korean War after the sides failed to reach a peace treaty. U.S. Army Gen. Robert Abrams, who commands U.S. Forces Korea and the Combined Forces Command, also leads the U.N. Command.

The DMZ, about 155 miles long and 2.5 miles wide, has often been a flash point in tensions between the two Koreas. The aircraft warning panel markers are among the measures in place to prevent accidents or misunderstandings that could escalate into conflict.