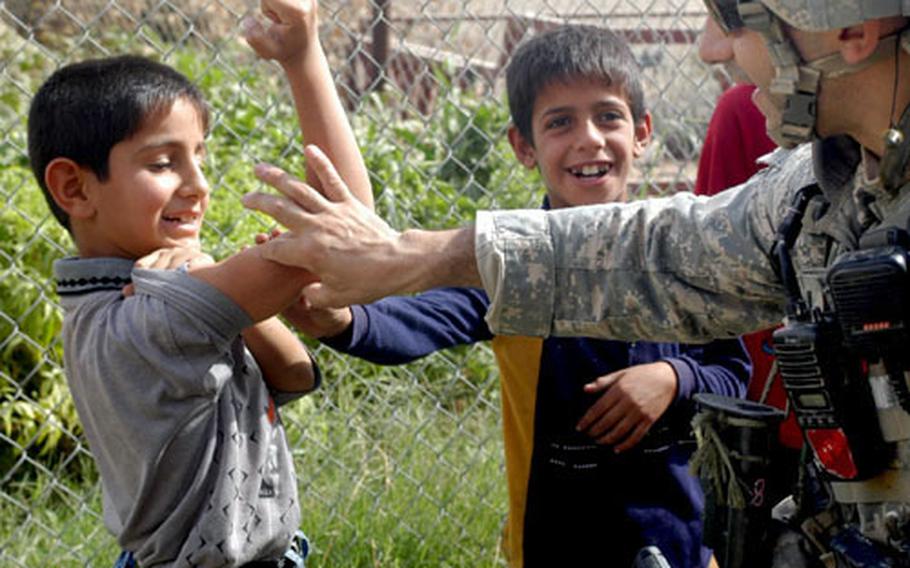 First Lt. Manny Menendez, right, a physician’s assistant from Company B of the 2nd Battalion, 505th Parachute Infantry Regiment, 82nd Airborne Division, tests the muscle of an Iraqi boy Monday in the town of Wynot, south of Tikrit. The unit was to meet the local sheik and acquaint themselves with the village. (Ben Murray / S&S)

First Lt. Manny Menendez, right, a physician’s assistant from Company B of the 2nd Battalion, 505th Parachute Infantry Regiment, 82nd Airborne Division, tests the muscle of an Iraqi boy Monday in the town of Wynot, south of Tikrit. The unit was to meet the local sheik and acquaint themselves with the village. (Ben Murray / S&S) 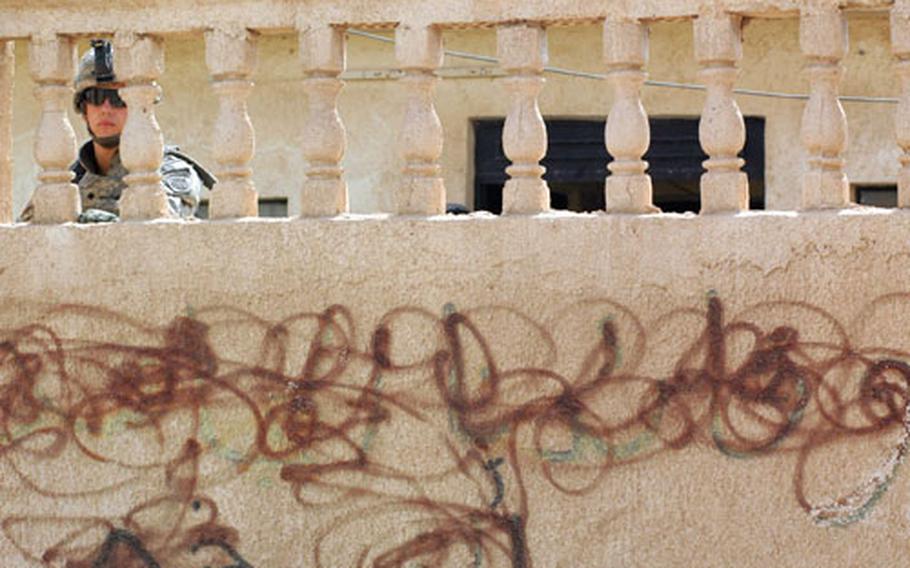 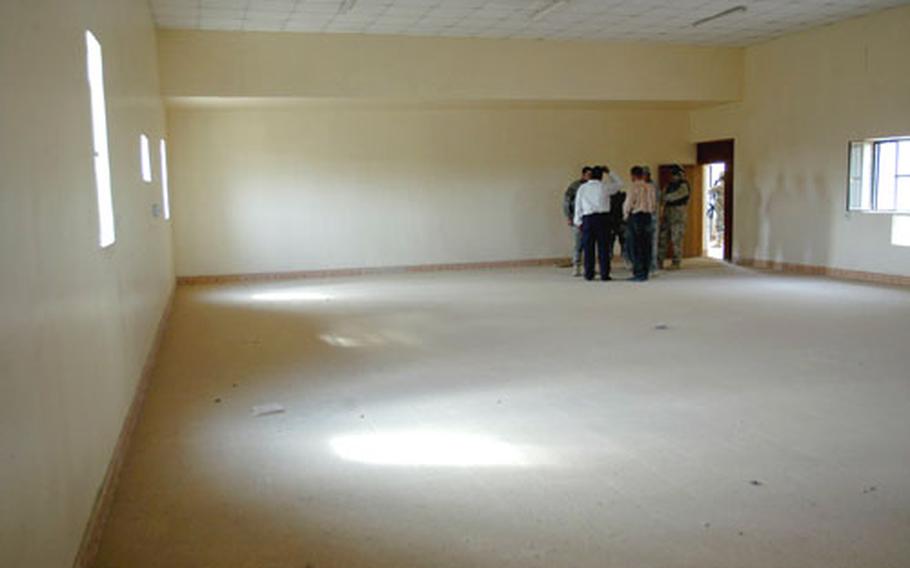 WYNOT, Iraq &#8212; The first time Capt. Jason Holder met the sheik of Wynot, he was told the small town south of Tikrit was safe for U.S. soldiers, that there shouldn&#8217;t be any threat to American forces.

On Monday, during the company commander&#8217;s second visit, the ailing village elder also was adamant that there weren&#8217;t any doctors in the local clinic, which Holder had come to assess along with an Iraqi police building.

But when Holder asked the sheik&#8217;s 17-year-old grandson to take them to the clinic, he was flatly refused. He couldn&#8217;t be seen in public with American forces, the teen said through a translator. He was nervous, he said. People would talk. And who might hear?

Well, maybe there were some bad people in the town, the sheik said, but they were definitely foreign men, transients from other parts of the country.

&#8220;This is very disappointing, I didn&#8217;t think we were going to run into this,&#8221; Holder said to the sheik. The American captain was in a position many U.S. troops in Iraq find themselves in during daily missions to help improve local security forces and infrastructure in towns such as Wynot.

In the effort to coordinate with Iraqi leaders, the often straightforward and direct Americans try to bridge a social divide with men from an intricate Arab social system.

It&#8217;s not exactly that the sheik was lying, Holder later said, but his story was more of a product of complex Iraqi cultural mores that often obligate people to skirt the truth for reasons of politeness or honor. In the end, the boy agreed to point out the clinic, which turned out to be staffed by the closest thing the town has to a doctor &#8212; a physician&#8217;s assistant with a measly cabinet of medical supplies.

On Monday, the bulk of the mission for Holder&#8217;s unit, Company B of the 2nd Battalion, 505th Parachute Infantry Regiment, 82nd Airborne Division, was to check out the clinic and to assess the local Iraqi police presence to see if there was a way to provide buildings for both.

About five months ago, the United States pitched in a little less than $200,000 to build a police station in the town, said Sgt. 1st Class Jeffrey Newkirk, a civil affairs officer working out of Contingency Operating Base Speicher, north of Tikrit.

When the sheik expressed a need for both medical facilities and police in Wynot, Newkirk and Holder&#8217;s troops decided to get a look at what already was available. What they found Monday hadn&#8217;t been in the original plans for the city.

The police station, well-built and brand new, sat empty and unused on the edge of town. Local police had declined to use it because it was in the middle of the neighborhood, instead of set apart where it could be isolated for safety.

Looking for a workable solution amid a tangle of circumstances and projects left by previous units is also something troops often have to do in Iraq, and Holder already had a plan in mind. Perhaps the police could use the current clinic, near the sheik&#8217;s house, and the newly-built station could be converted into a medical facility, he suggested &#8212; though getting people to man each station was a whole new matter.

But a city council member who came to unlock the abandoned police building said he could provide recruits for the force if the regional headquarters would support an outpost and proved eager to work with U.S. forces on other improvements.

Council member Emad Ahmed said the town was suffering a 90 percent unemployment rate, and opening a police station would both provide job opportunities and bolster a scant police presence. The reported lack of police was later disputed, however, when an officer in the nearby Iraqi police station in Owja claimed later that patrols went to Wynot daily, sometimes twice a day.

Contradictions aside, Holder seemed optimistic about increasing police and medical facilities in the town, though he also is working through another Iraqi tendency when it comes to infrastructure improvement &#8212; an expectation that Americans will simply hand over money and resources.

Many are used to U.S. forces just giving them things &#8212; from cash to furniture &#8212; in a trend soldiers have to end before American troops can go home, Holder told the council member. For that reason, he refused to let Ahmed schedule a city council meeting around a time when he could attend. He likewise declined to provide AK-47s to the council members, which Ahmed said they needed to protect themselves.

But, Holder asked, didn&#8217;t he already have one? Well, yes, Ahmed said, but his brother was using it.