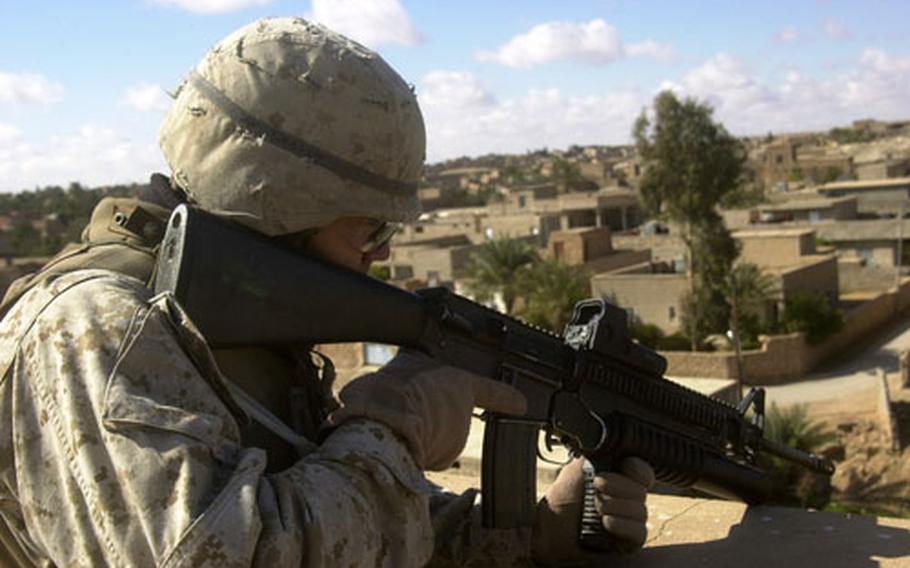 A Marine with Company E, 2nd Battalion, 3rd Marine Regiment, stands guards on a rooftop over Haditha last month. Several factors, including better controls on vehicular traffic and a bolstering of the local police, have reduced attacks in the Haditha area since the battalion arrived in September. (Steve Mraz / S&S)

These three steps have greatly improved conditions in and around Haditha from when the 2nd Battalion, 3rd Marine Regiment arrived last fall, Marines say.

Company E, which arrived in September, averaged a casualty a day in its first 45 days.

Insurgents were suspected of transporting weapons across the desert west of Haditha and into the city, avoiding detection. To remedy the flow of weapons and insurgents, U.S. forces began building an 8-foot-high, roughly 15-mile-long berm around Haditha, Haqlaniyah, Bani Dahir and across the river in Barwanah in early December.

Overall attacks dropped 50 percent and small-arms fire decreased 75 percent in the triad since the berm was erected, according to Regimental Combat Team 2 statistics in early February.

But the berm is not likely the only cause of the drop in attacks, Donnellan noted.

In mid-November, Marines and Iraqi police decided to ban vehicle traffic within the triad, allowing car travel if Iraqis registered at a civil military operations center.

Perhaps the Marines&#8217; biggest success in the Haditha area is the growth of the Iraqi police force. When the battalion arrived in Haditha, the police had just eight officers, and insurgents had beheaded the police chief&#8217;s 19-year-old brother. Col. Farouk, the local Iraqi police chief, feeling pressure from his mother, questioned whether he should continue as police chief. Tracy calmed him down and convinced Farouk into staying on the job, Donnellan said.

Tracy knew that he must gain the fledgling police force&#8217;s trust and the trust of the local populace if the insurgency would be quelled. He recognized the importance of the local police and gained their trust through actions, not just words. Now, the Iraqi police force there numbers between 200 and 300. &#8220;They are the path,&#8221; Tracy said. &#8220;They&#8217;re the guys who are going to win. Win with a capital &#8216;W&#8217; &#8212; not just finish this deployment, go home to our wives and let somebody else deal with the problem. But bring peace to this place that desperately needs it, is owed it.