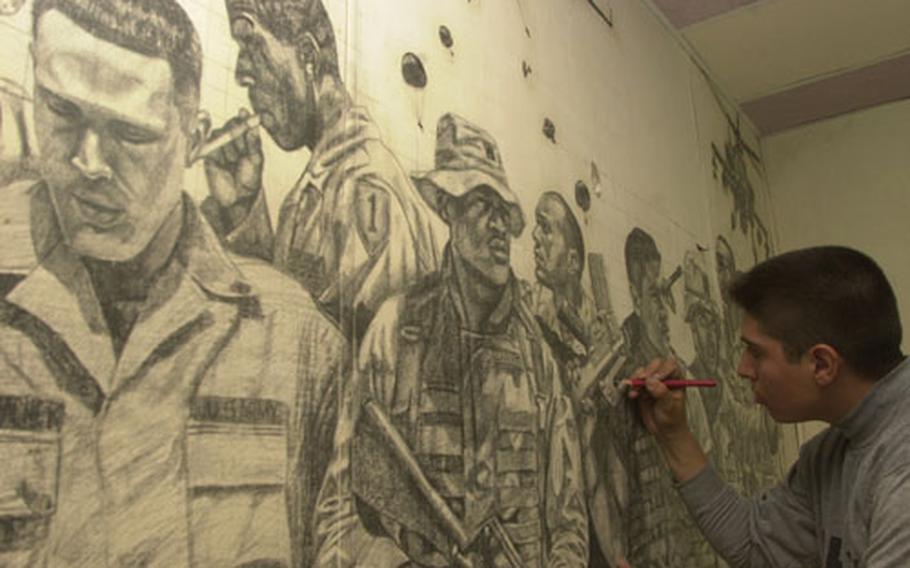 KIRKUK, Iraq &#8212; Thousands of miles from his California home, Pfc. Omar Mejia Loera soldiers on in the desert heat in hopes of fueling his future as an artist.

In February 2002, Mejia Loera, 20, pledged three years of his life to the Army to get money for art school. Today he&#8217;s an airborne supply clerk with the Italy-based 501st Forward Support Company who has seen more of the globe than he ever imagined in his pre-Sept. 11 high-school days.

Mejia Loera&#8217;s unit landed in northern Iraq with the 173rd Airborne Brigade shortly after the war started, and quickly made its way to the airfield at Kirkuk. He wound up in a little building along the flight line, between the Army chow tent and the main hangar.

On the large blank wall behind his desk, he took an artist&#8217;s pencil and began drawing a mural of some of the men and women in his unit: an officer with his hand in the air beginning to speak, a bare-headed soldier casually holding his rifle behind his neck, a sergeant squinting intensely at the horizon.

The realistic mural caused plenty of excitement in the routine of the 501st FSC. Over the months, Mejia Loera has added more faces from his company &#8212; impressing them with his larger-than-life portraits, and causing others to wonder why they&#8217;ve been left out. He said he simply chooses people whose faces interest him the most.

As a boy living in Mexico, Mejia Loera learned about art from his father, Oscar, a carpenter who also draws and carves wood.

&#8220;I always wanted to make my parents proud of me,&#8221; Mejia Loera said. &#8220;There is nothing like expressing myself through art. I started noticing my teachers and friends complimenting my drawings, and when I was about 9, I decided I wanted to be a cartoonist.&#8221;

When he was 11, his family moved to California through the efforts of his mother, Sylvia, who was born in the United States and holds U.S. citizenship.

Omar and his sister, Liliana, who is three years older, grew up fast because both of their parents are deaf.

While some look upon deafness as a disability, deaf people do not see it that way. Deaf people have their own language and culture. Nature helps them compensate for their hearing loss in other ways.

He said his father has won &#8220;many diplomas and awards.&#8221; But the one thing Oscar&#8217;s deafness prevented him from doing was joining the military.

Because he likes heights, Mejia Loera chose Airborne School and landed in Italy with the 173rd. His family was proud and shocked to learn that he would be going to war.

As a soldier and an artist, Mejia Loera must slip back and forth between two worlds that don&#8217;t always fit together well.

He doesn&#8217;t agree. He plans to leave the Army in 2005 and go straight to art school in Long Beach, Calif. He&#8217;s interested in both expressionism and realism, and he hopes to land a job with a large graphics company such as Pixar or DreamWorks, making cartoon movies.

Mejia Loera has finished six months of a deployment that likely will stretch to one year &#8212; far longer than he or anyone else in his unit expected when they landed last spring. He will not forget or regret his time in Iraq.