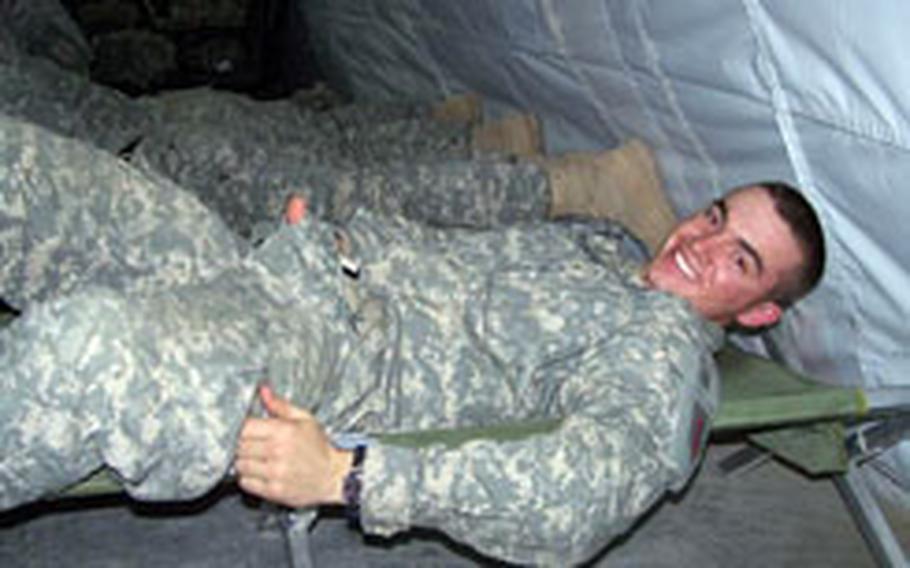 Pfc. Duncan Crookston prepares to get some rest while deployed in Iraq. ()

Pfc. Duncan Crookston prepares to get some rest while deployed in Iraq. () 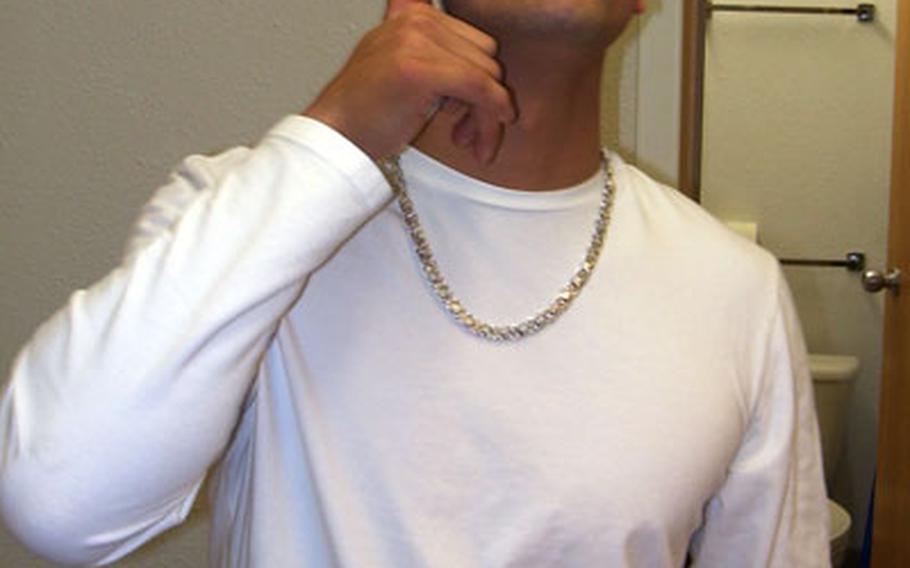 Pvt. Randy Shelton gets ready for a date back in the States. () At around 10:30 a.m. on a Tuesday morning, five men in a Humvee led a five-truck patrol through the traffic of Route Predator, known as one of the deadliest roads in the New Baghdad district of Iraq&#8217;s capital.

In the vehicle were Sgt. Joel Murray, 26, the truck commander, riding in the front passenger seat; Spc. David Lane, 20, the driver; Pvt. Randy Shelton, 22, the turret gunner; and in the back, Pfcs. Joseph Mixson, 22, and Duncan Crookston, 20.

The patrol was on its way to a gas station, where the men of Company C&#8217;s 2nd Platoon were taking an engineer to do some assessment work of concrete barriers protecting the location.

As the soldiers neared the station at about 10:45, an explosion went off, said Sgt. 1st Class Daniel Smith, 31, who was the acting platoon leader that morning and riding in the fourth vehicle of the convoy.

Three of the men &#8212; Murray, Lane and Shelton &#8212; were killed when an explosively formed penetrator, a weapon favored by Shiite militias, ripped through their Humvee.

Two others in the truck suffered multiple amputations and severe burns, altering their lives forever.

All of the men were with the 2nd Battalion, 16th Infantry Regiment, 4th Brigade Combat Team, 1st Infantry Division, based in Fort Riley, Kan.

The Sept. 4 incident was a demonstration of the power of EFPs, which U.S commanders say are smuggled from Iran and can destroy a vehicle in a single blast, punching a hole in the vehicle&#8217;s armor, then spraying occupants with a stream of shrapnel.

But interviews stemming from that incident show how soldiers can draw strength from each other and come to appreciate each others&#8217; quirks and qualities, even after they&#8217;re gone.

Smith had seen friends die before while deployed to Kosovo in the late 1990s.

He didn&#8217;t hear much from the troops, except for Crookston, who was calling out to American Samoa-born Staff Sgt. Asila Ume, 45, who was acting platoon sergeant that day and riding in the second vehicle.

Crookston wanted out of the vehicle.

Ume had already dismounted from his vehicle, he said, having witnessed the roadside bomb hit the Humvee right in front of him and seeing that the vehicle was on fire. The men needed help.

But Ume said half of Lane&#8217;s body was hanging out of the vehicle. Crookston was still calling out to Ume, but two medics were already doing what they could for the men.

Both Ume and Smith said Murray was killed instantly, bearing the brunt of the explosion, which slammed into the right side of the Humvee.

Lane died right after being pulled from the vehicle. Hanging on was Shelton, but he had only moments left.

Moving upFrom the rear of the convoy, Staff Sgt. Tristan Ruark, 30, and from Clarkston, Wash., said he heard rounds of ammunition &#8220;cooking off&#8221; from the flames in Murray&#8217;s truck and then directed his driver to move up to the front.

He said the explosion had scared all of the men, but when everyone realized what had happened, the men went into action. Those who didn&#8217;t immediately assist the dead and injured searched the street and nearby buildings for suspects.

Another platoon had linked up with the 2nd Platoon just prior to the incident, so those men were on scene, too. And another platoon patrolling nearby came to assist as well.

Several Iraqis had also been killed and injured in the blast, and the local populace had run into hiding when the bomb went off.

Meanwhile, Smith shored the men up for a run to nearby Forward Operating Base Loyalty, a three-minute drive from where the incident happened, and ordered the men to get all of the soldiers from the first Humvee into various vehicles to rush them to the base&#8217;s hospital.

In the end, Murray, Lane and Shelton died at the scene. Crookston and Mixson were still alive, but were clinging to life.

Crookston was badly burned and sustained significant injuries. Both of his legs were amputated, along with his right arm and left hand, and 75 percent of his body was left severely burned.

Made you smileAs for Mixson, the strapping 6-foot-5-inch soldier has lost both of his legs at the knees, according to his buddies.

Mixson&#8217;s roommate and best friend, Pfc. Kurtiss Baumgartner, a 19-year-old infantryman from Pleasant View, Colo., who is in the 2-16, said Mixson, who hails from Williston, Fla., is known as a fun guy.

The injured soldier is now in a hospital recovering in the U.S.

As for Murray, the truck commander from Salina, Kan., his friends recall him as an infantryman&#8217;s infantryman.

Lane, from Emporia, Kan., was known for his goofy faces, which would usually elicit laughter from the other troops in the 2-16.

Lane&#8217;s roommate was Shelton, a Chicago native, who died alongside him.

&#8216;A close group&#8217;Berlongieri and Lane were going to open a truck stop together when they got out of the Army. It was going to be called &#8220;Berlane&#8217;s,&#8221; a fusion of their last names. They had even made T-shirts, committing themselves to the business endeavor.

Berlongieri said he will open the garage with the original name.

Crookston, an airborne infantryman from Denver, was quieter, said friends.

&#8220;He was always helping us with our computers cause he knew about everything digital,&#8221; said Staff Sgt. Welby Richardson, 31, from Gonzales, Texas. He was Murray&#8217;s roommate.

The soldiers of the 2-16 have a little more than seven months left in Iraq.