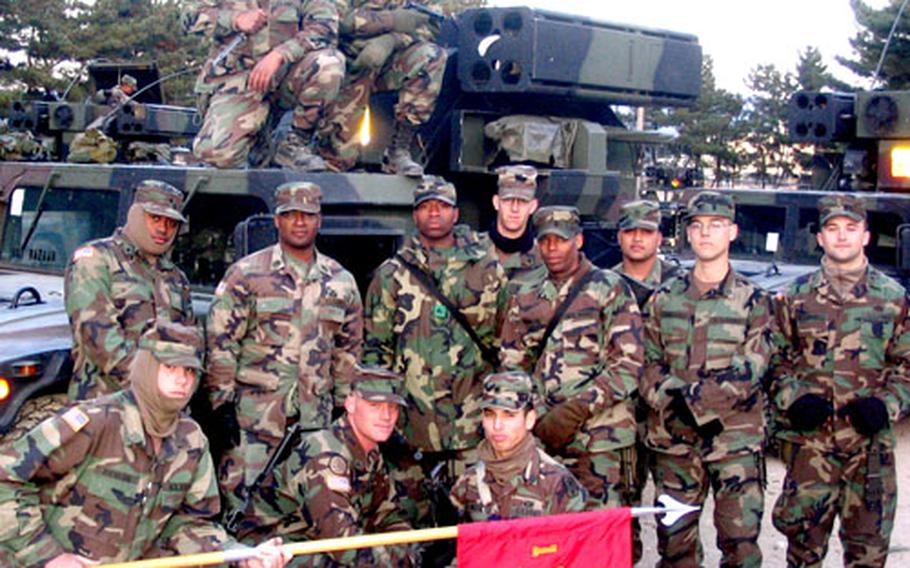 PYEONGTAEK, South Korea &#8212; The wife of a Camp Casey soldier who suffered head injuries after a car hit him earlier this month is saying a big thanks to her husband&#8217;s unit, which rallied to his side and flew her and his parents from Texas to his bedside.

Pfc. Shannon Chalfant, 22, of the 35th Air Defense Artillery Brigade, suffered a fractured skull and hemorrhages in the Jan. 14 incident about 200 yards south of the Camp Casey main gate.

A car believed to be traveling nearly 40 mph struck Chalfant and tossed him into the air, according to Capt. Alan Faye, Battery E&#8217;s commanding officer.

The South Korean driver was charged at the scene with unsafe driving, Faye said.

Chalfant and a fellow soldier were on their way to a jewelry store outside post where Chalfant was to make a payment on a ring for his wife, Faye said. The couple have two daughters, Amanda, 19 months, and Krystal, eight months.

He had about one month left on his one-year Korea tour when the car hit him.

He was initially treated at Camp Casey clinic, then taken by helicopter to the Army&#8217;s 121st General Hospital in Seoul. He underwent further treatment at Kangnam St. Mary&#8217;s Catholic University Hospital, Faye said.

&#8220;He was transported there because the Kangnam St. Mary&#8217;s Hospital has a neurological department that could better treat him than the 121 Hospital,&#8221; he said.

On Wednesday, Chalfant was flown to Tripler Army Medical Center in Honolulu for further treatment and rehabilitation.

At word of the accident, Chalfant&#8217;s unit rallied to give him support.

With 1st Battalion and 8th Army command support, Faye said, arrangements were made to fly Chalfant&#8217;s wife and parents from Houston on Jan. 22 and have them stay at the Dragon Hill Lodge on Yongsan Garrison in Seoul at Army expense.

&#8220;We would bring his battle buddies and other people from his platoon down to visit him,&#8221; Faye said.

The unit raised more than $2,500 in donations to help Chalfant&#8217;s family with food, babysitting, and other expenses, Faye said.

&#8220;Monday night he opened his eyes and he awoke and then we knew that his progression was getting better and that&#8217;s when I began to breathe a little sigh of relief,&#8221; said Jo Ann Chalfant.