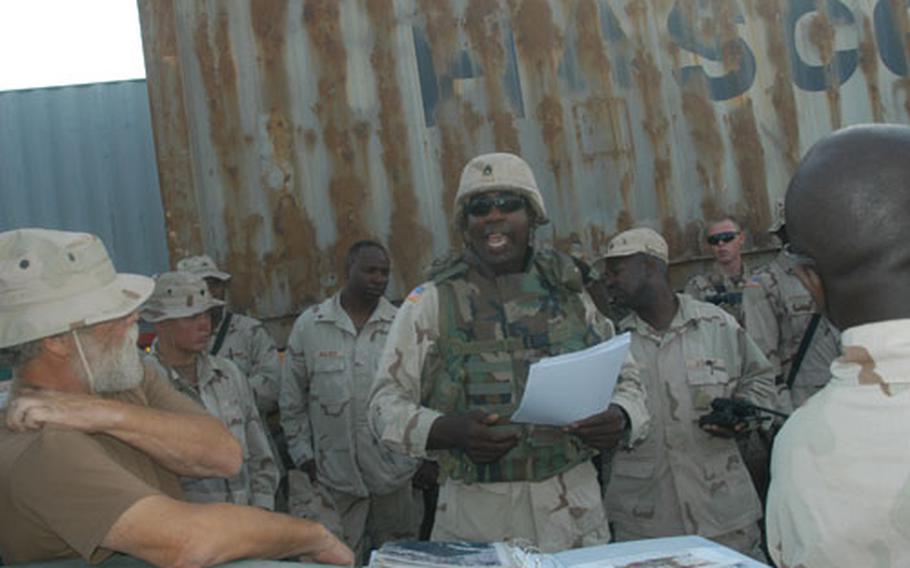 Staff Sgt. Jerome Lemon, convoy commander with the 1052nd Transportation Company, holds the traditional convoy briefing explaining radio protocol, weapons status, and strategies for responding to vehicle failures and attacks. These soldiers know what to expect from the route, because they drive it nearly every day. (Jessica Inigo / S&S)

Staff Sgt. Jerome Lemon, convoy commander with the 1052nd Transportation Company, holds the traditional convoy briefing explaining radio protocol, weapons status, and strategies for responding to vehicle failures and attacks. These soldiers know what to expect from the route, because they drive it nearly every day. (Jessica Inigo / S&S) 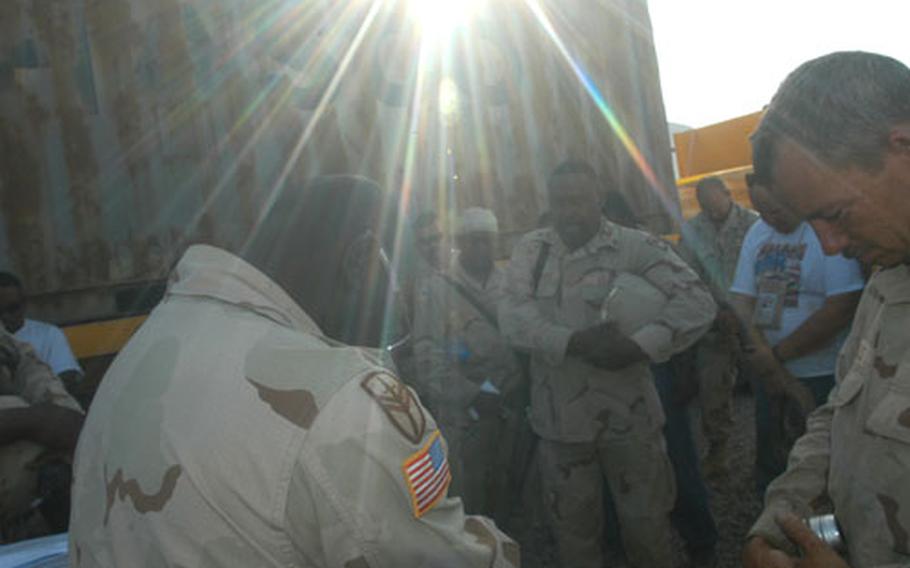 Troops of the 1052nd Transportation Company, a National Guard unit out of Kingstree, S.C., along with truck drivers from Kellogg, Brown & Root, pray together before heading out to Baghdad. Nerves are especially high Monday because there was an attack that had mass casualties along the same supply route near Taji only a couple of days earlier. (Jessica Inigo / S&S)

BAGHDAD &#8212; Troops would wake up at &#8220;oh-dark-thirty&#8221; for a convoy if they were anywhere other than Iraq. But the sun is already climbing the desert sky when soldiers from the 1052nd Transportation Company roll out of their sleeping bags Monday morning.

The National Guard unit out of Kingstree, S.C., prepares for the trip from Logistics Support Area Anaconda, near Balad, by arranging in long lines in an empty, dusty lot.

These soldiers know the deal. They don&#8217;t have to be told what to expect from the route: They drive it nearly every day.

They know traffic will thicken as they approach Baghdad. They understand they have to pay close attention when cars, trucks, motorcycles and people close in around them during lulls. They are aware that if anyone aims a weapon at the convoy, or is even seen carrying an RPG, they should be shot.

Talk of the day lingers around a car bomb that hit a convoy around Taji a couple of days ago. There were mass casualties.

The rest of the briefing covers radio protocol, weapons status, and strategies for responding to vehicle failures and attacks. There is a quick prayer given by a sergeant in the unit, and then lines of vehicles come to life and start snaking out of the parking area onto the &#8220;hardball.&#8221;

Gun trucks are sprinkled throughout the convoy.

Sgt. William &#8220;Kenny&#8221; Sauls crawls behind the wheel of his two-seater Humvee. There is a soldier manning a mounted squad automatic weapon and another manning a .50-caliber machine gun in the back. The original canvas doors of the Humvee are gone, replaced by 1-inch-thick armor steel sheets with no glass.

As the convoy prepares to roll out of Anaconda and into a portion of the Sunni Triangle, which is known for its attacks against coalition forces, the sergeant says something about needing gas. But it&#8217;s too late for that. It&#8217;s time to lock and load.

As soldiers have their weapons at the ready exiting the camp, little children are out waving to them. The weapons don&#8217;t seem to bother them. Some point to their mouths in hunger, others simply look at the passing troops with a smile. The troops cannot give handouts per Army policy, so many simply wave back.

The convoy drives as fast and close together as it can.

Farm land zips past. Cows and sheep walk along the shoulder of low brush and irrigation canals. Everything looks serene, but this is the same place where people lob handfuls of mortars into the camp each week.

Sauls maneuvers the road like a pro. He doesn&#8217;t hit potholes and stays off the shoulders, explaining that those are prime locations where improvised explosive devises are placed.

Everyone in the Humvee is wired in to the same communication frequency with a Kevlar helmet, microphone and earphone set. Chatter is light and comical. One of the guys talks about his job in the Army.

Spc. Joshua McDaniel, a country boy who plans to make the Army a career, is talking to his sergeant.

The other gunner stops the conversation and asks if McDaniel could be quiet and pay attention to his sector.

The convoy heads down the highway toward civilization. The trucks and Humvees stay in the left lane and away from the shoulder. Iraqis in civilian cars and pickup trucks quickly move to the right. Nobody passes.

Off the road, women in black robes skillfully walk with huge packages balanced on their head, barefoot children run back and forth, and shepherds tend to flocks that forage along the ditches. There are a few shattered and burned-out vehicles in medians and high brush that stand as a reminder of problems on that stretch of highway in the past.

There are a few lulls, especially around Taji. During one stop, Sauls&#8217; Humvee stops under a bridge.

Then, quickly, the convoy rolls over overpasses and ducking under underpasses within minutes of BIAP.

The convoy goes off without a hitch. There is an almost audible sigh of relief while the convoy gets in line to enter the security behind the KBR trucks.

As Sauls&#8217; Humvee rolls onto BIAP, the driver shakes his head with disbelief and moves over to the shoulder.

Luckily, the Humvee is in the safe zone. If it would have happened outside the wire, it could have been a different story.

This time, things ran smoothly, but the unit has to prepare to head back to Balad in a couple of hours.

But next time, there will be no gas problems, Sauls says.