Unit is gearing up for troop rotation at port in Kuwait 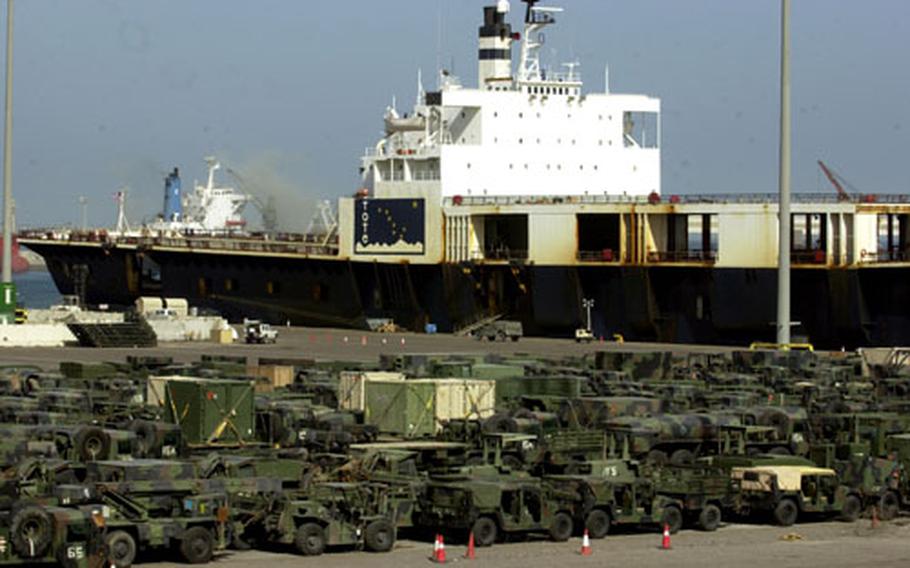 Hundreds of military vehicles are lined up at Shu&#39;Aibah Port, Kuwait, after being unloaded from cargo ships. (Jim Schulz / S&S)

Hundreds of military vehicles are lined up at Shu&#39;Aibah Port, Kuwait, after being unloaded from cargo ships. (Jim Schulz / S&S) Soldiers from the Giebelstadt, Germany-based 159th Aviation Regiment, known as Big Windy, wrap plastic around a Chinook helicopter in preparation for their return to Germany. (Jim Schulz / S&S)

SHU&#8217;AIBAH PORT, Kuwait &#8212; Cargo ships are lining up around the world to get into Kuwait as 65 ships carrying more than 3 million tons of U.S. military equipment will make their way to this port over the next two months.

And soldiers from the 598th Transportation Group will be waiting to move the tanks and trucks a little farther on down the line.

Meanwhile, most of the military hardware currently in Iraq will be shipping out.

Roughly 140,000 troops, many from the Germany-based 1st Armored Division, will depart Iraq this spring after a one-year combat tour. Replacing them are about 110,000 soldiers from the States and from the 1st Infantry Division in Germany.

The transportation group, a conglomerate of 12 Army Reserve detachments, began planning for the upcoming operation in October, Williams said.

From February to April, ships carrying up to 2,000 pieces of equipment each will dock at Shu&#8217;aibah, a commercial port 20 miles south of Kuwait City.

The port is running 24-hour operations. While three ships are unloading equipment, soldiers leaving the Middle East are driving trucks and tanks into the cargo hold of a fourth ship.

And it&#8217;s not yet as busy as last year, when every available berth was filled as the military prepared to invade Iraq. But last year&#8217;s deployments pale in comparison to what&#8217;s coming, said Lt. Cmdr. Ray Beno, 39, a Naval Reservist from Glen Head, N.Y.

From 975,000 to 1.3 million pieces of equipment will arrive at the port, while gear coming from Iraq waits to be shipped home.

Getting the equipment on and off the ships is the easy part. The nearby staging ground, where tanks and trucks are parked before being moved, can hold only 6,000 vehicles, Beno said.

Meanwhile, soldiers must scrub their vehicles and clear customs before corralling them in a &#8220;sterile&#8221; yard. Just north at Camp Arifjan, thousands of vehicles wait in gated marshalling areas for delivery to the port. Some are from the 4th Infantry Division and the 82nd Airborne Division, two units scheduled to leave Iraq. Port officials are trying to get the 101st Airborne Division&#8217;s gear out within the next two weeks.

Starting in mid-February, the first of 65 ships will begin arriving. Five are coming from North Sea ports, carrying the 1st Infantry Division&#8217;s gear. Five more will arrive from the States with the 1st Cavalry Division.

This week, two Germany-based units were finishing up work at the port.

As they wrapped the white sheets around the aircraft, the aviators knew it was their final task.