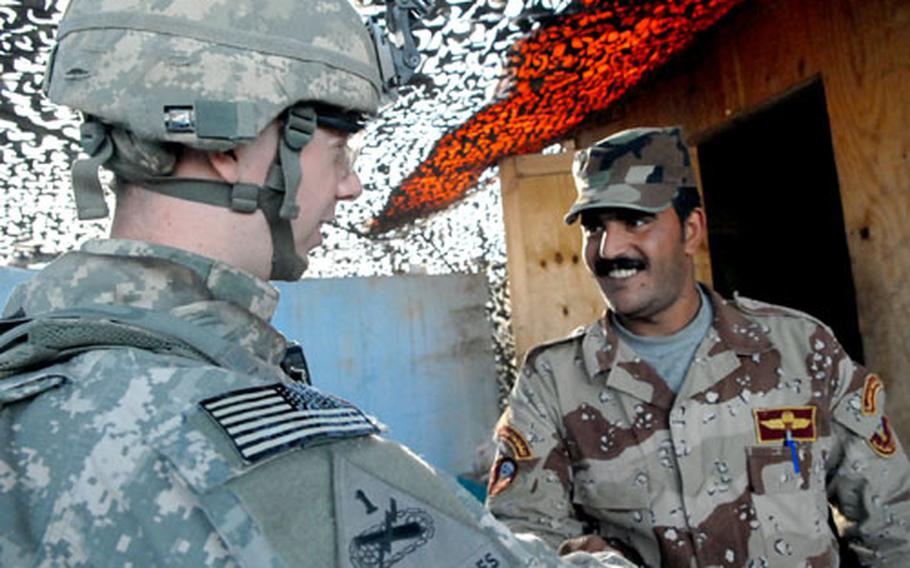 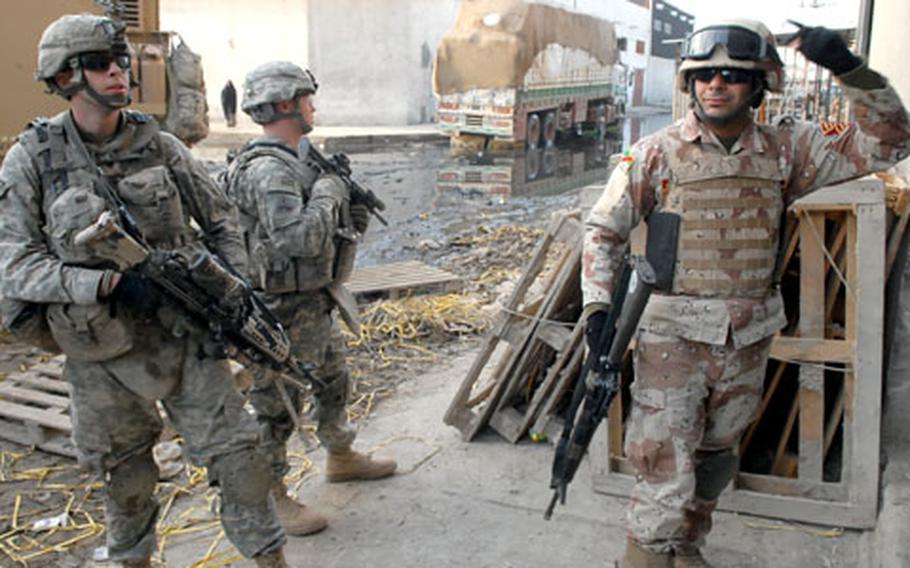 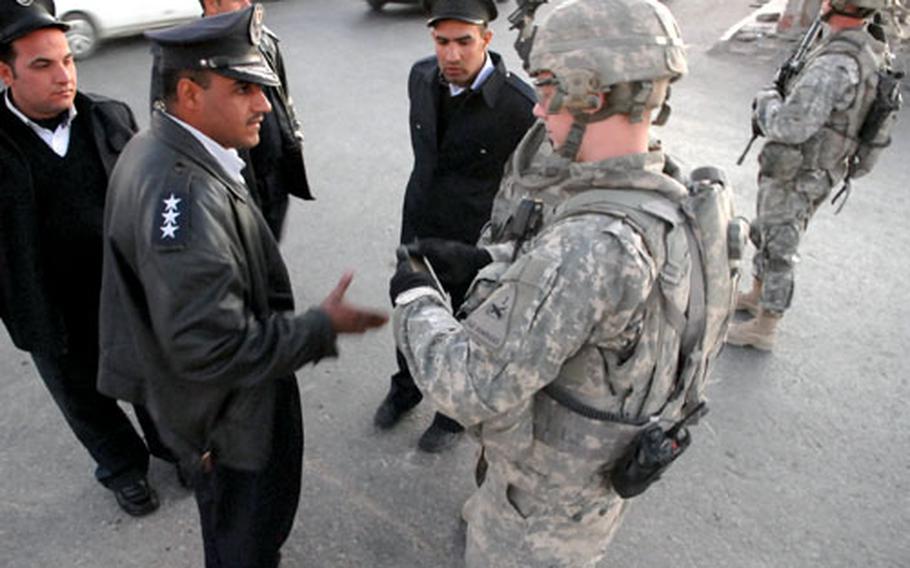 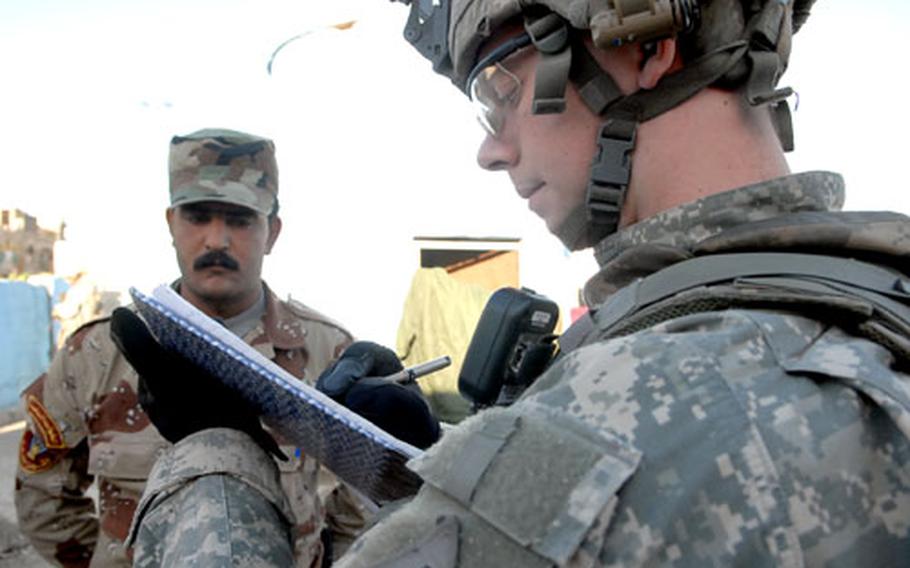 Second Lt. Clayton Merkley signs a guestbook Friday at a checkpoint in Baghdad’s Sadr City district while Iraqi army 1st Sgt. Hassan al-Harabi looks on. The guestbook allows visitors to record the soldier’s performance when they pass through. Merkley’s verdict: The checkpoint was pretty good, but the soldiers could search the passing cars a bit better. (James Warden / S&S) 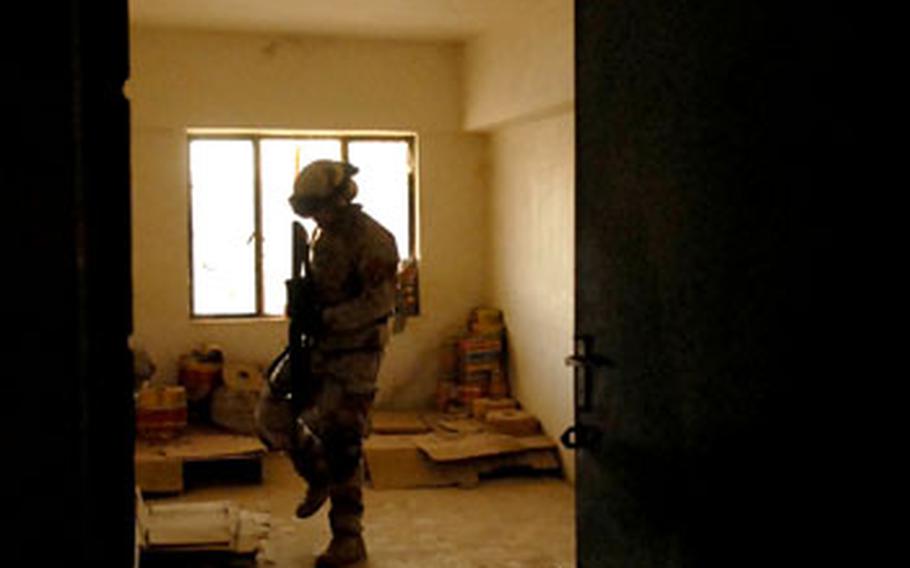 Iraqi army Cpl. Abbas Kadim searches a room in a flour storage building Saturday in Baghdad’s Sadr City district. The Iraqi army will participate in every U.S. operation starting Jan. 1 in preparation for the day when they will eventually work without American help. (James Warden / S&S)

BAGHDAD &#8212; The soldiers of Company A, 1st Battalion, 6th Infantry Regiment were searching a Sadr City industrial area for roadside bomb components Saturday when they came upon a locked door in the Baghdad slum. The soldiers could easily have kicked down the door, but that would have undoubtedly made enemies in an area that has long been one of Iraq&#8217;s most violent.

Luckily, they had Iraqi army Cpl. Abbas Kadim with them. Kadim asked some neighbors who owned the building, found the man with the key and led the Americans into the building without hurting property or feelings.

The security framework agreement that lays out the plan for America&#8217;s withdrawal from Iraq will undoubtedly require many changes from U.S. forces when it goes into effect Jan. 1. Among others, the agreement &#8212; commonly called a status of forces agreement &#8212; mandates that all U.S. operations must be coordinated with Iraqi forces.

But like many units across Iraq, Company A is already well on its way toward fulfilling that requirement &#8212; as Saturday&#8217;s mission attested. First Lt. Ilya Ivanov, a platoon leader, said he has brought Iraqis along on every mission since Nov. 28 except for quick response missions such as responding to a roadside bomb attack.

This head start should make the status of forces transition smooth once the New Year rolls around, said Maj. John Gossert, the executive officer for 3rd Brigade Combat Team, 4th Infantry Division &#8212; the unit in charge of 1-6.

This coordination has long been prevalent &#8212; especially at the battalion level and below, where it is easier for Americans and Iraqis to link up and patrol together, he said. But the Americans are already working jointly even at the comparatively more difficult brigade level. Gossert noted that the Americans are also experienced at working with local government councils and departments on projects.

"We&#8217;ve always said that in the big picture we want to work ourselves out of a job," he said.

But Company C, 1st Battalion, 35th Armor Regiment &#8212; which is also part of Task Force 1-6 &#8212; also regularly links up one or two U.S. platoons with an Iraqi platoon to search for weapons and gather details about the community.

Linking up is no problem. Every base under the 3rd Brigade Combat Team has an Iraqi security force presence. An Iraqi army battalion headquarters adjoins the combat outpost that Company C occupies. Merkley can just grab an interpreter and a battle buddy and walk over to plan missions face-to-face with the operations officer or a fellow platoon leader. He also has direct phone line to the Iraqi army company commander in his sector.

Working with the Iraqis brings its own challenges. Soldiers have to allot more time on the front end of missions to link up with the Iraqi units, Merkley said, since Iraqi units across the country are noted for their lack of punctuality. Ivanov said it&#8217;s common for the Americans to wait 20 or 30 minutes for them to get ready.

Spc. Dustin Niehus, a soldier in Merkley&#8217;s platoon, added that the Americans must also occasionally prod sluggish Iraqis to work harder. This didn&#8217;t happen during Saturday&#8217;s patrol. Kadim heaved himself up onto roofs and poked his head into dark spaces to make sure nothing was hidden.

Any difficulties with the patrols are offset by the advantages of bringing the Iraqis along, Niehus said. They have more manpower to search homes and vehicles. Talking with residents also goes faster because the Iraqis don&#8217;t have to wait for an interpreter to come along as the Americans do. And the Iraqis have the cultural knowledge that is key in this war.

Merkley anticipates some fine tuning when the security framework agreement rolls around for real, but he expects that his unit&#8217;s head start will make the transition largely invisible.

"January 1 will come and go, but except for changing the calendar, there won&#8217;t be a whole lot of change," he said.

What is the security framework agreement?

The security framework agreement is a document that lays out the road map for a return of Iraqi sovereignty, said Lt. Col. Peter Pierce, the team leader for the 3rd Brigade Combat Team, 4th Infantry Division human terrain team.

These issues include a withdrawal plan for U.S. forces, the legal status of American contractors in Iraq, the requirements for a U.S. soldier to detain a suspected insurgent, even environmental and auto registration requirements.

Here is what the agreement says about future military missions, including joint patrols:

Issues regarding proposed military operations that cannot be resolved by the JMOCC shall be forwarded to the Joint Ministerial Committee.