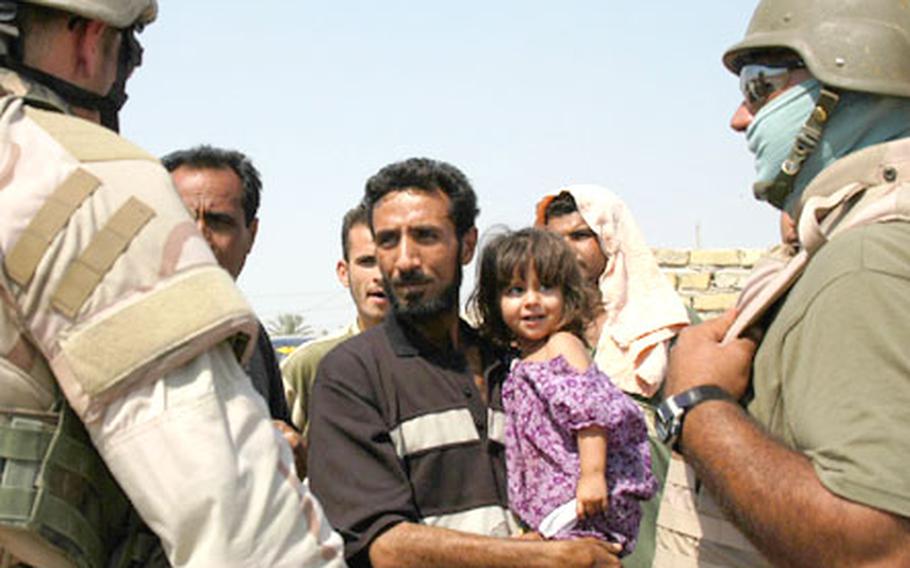 BAGHDAD &#8212; A dozen U.S. infantry soldiers spent Friday releasing detained Iraqis, interviewing witnesses to a bombing and scouting out different sites on their beat in this war-torn city.

As the American and Iraqi forces try to impress more law and order in Baghdad, infantry platoons within the 2nd Battalion, 256th Brigade Combat Team have combined police work with military tactics in an effort to make the city safer, according to Henderson, who leads 1st Platoon, Company A.

On Friday, that meant listening for any anti-American messages announced from a mosque on Islam&#8217;s holy day. It also meant patrolling the main streets of Shula and Kadhimiya, two sections of Baghdad near the Green Zone, much like police would back home.

The soldiers face constant worries about sniper fire, a suicide car bomber, a rocket-propelled grenade or a roadside bomb. To prevent attacks, the soldiers brake as seldom as possible in their armored Humvees, equipped with air conditioning to combat the 114-degree heat. It often means the infantry&#8217;s patrols barrel through Iraqi boulevards and highways at 40 to 50 mph, shouting and honking at pedestrians and drivers who don&#8217;t yield.

Some of the platoon&#8217;s missions also involve capturing, and then returning, people suspected of supporting the insurgency. The scenario is not uncommon, the soldiers said Friday, and some jokingly referred to it as the military&#8217;s &#8220;catch-and-release&#8221; program.

A week earlier, the platoon had been assigned a night detail to detain a suspected insurgent at a home. The platoon raided the home and found four men and a stock of hidden guns, but not the wanted insurgent.

The platoon brought four Iraqis back to Camp Liberty, where they were detained for a week. Turns out the men were friends of an Iraqi informant to the U.S. military, and officials accepted their explanation that the owner of the home was a gunsmith, according to Henderson and Robert.

On Friday, the platoon dropped off the four men in flip-flops, boxer shorts and stained, sleeveless undershirts. All four men shook hands with Henderson before the soldiers left.

Ten minutes later, a roadside bomb exploded a few hundred meters away on a main route for U.S. military trucks. Another convoy was near the explosion &#8212; which blew away a tree &#8212; but no one was injured. Those trucks were ordered to move on, and it became 1st Platoon&#8217;s job to go investigate.

They found a group of Iraqis within eyeshot of the explosion who were scared but not hurt. Through an interpreter, they told the soldiers they had seen the car with a man and two women who had thrown out the bomb just before the convoy rolled through.

They also said the insurgents often use the small trees on the side of the roads as markers for the bombs, a new piece of information for the company, Henderson said.

These Iraqis have helped the United States before, said Staff Sgt. Timothy Hooper, 25, of New Orleans. About two weeks earlier, the same group of people saw a bomb placed and called the Iraqi police. Before the cops arrived, a U.S. convoy neared the area. The people flagged down the soldiers and told them about the bomb, Hooper said.

This time, the soldiers passed on the phone number for a tip line the Americans have set up for Baghdad residents. The people were reluctant to take the paper for fear that other Iraqis, perhaps supporters of the insurgency, might see it.