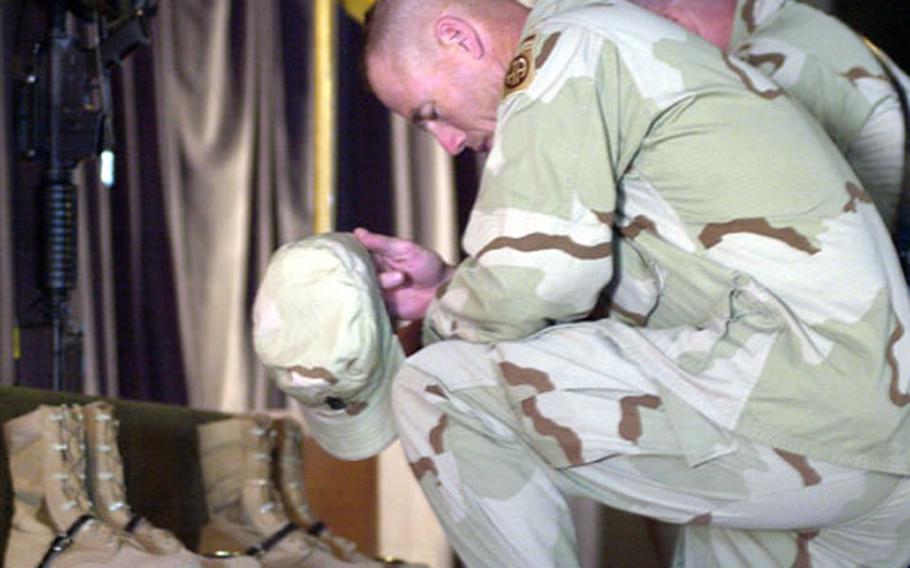 AL-ASAD AIR BASE, Iraq &#8212; Army Chief Warrant Officer 2 Matthew Laskowski carried a framed picture of his daughters, Isabel and Aniela, everywhere he slept in Iraq. The frame is the kind that plays a short, recorded audio message with the push of a button.

Before he left for the Middle East, one of his daughters made a recording just for him.

Every morning like clockwork, sometimes to the dismay of his two sleeping roommates, Laskowski pushed the button. He played it the day before his mission last Wednesday, as always.

But it would be the last time.

Laskowski and co-pilot Chief Warrant Officer 2 Stephen Wells died when the OH-58 Kiowa scout helicopter they were flying crashed into the Euphrates River that day. Both were members of the Outlaw Troop, 4th Squadron, 3rd Armored Cavalry Regiment based at Fort Carson, Colo.

The unit honored the men as exceptional officers and devoted fathers and husbands at an emotional memorial service on Friday in a standing-room-only base theater.

The pilots died only weeks before going home. The Army is investigating the matter, but reported that the cause is not believed to be a mechanical error or due to hostile fire near the city of Haditha, which is about 120 miles west of Baghdad.

During the ceremony, fellow soldiers and friends said the soldiers had talked about their plans for the day they would reunite with their wives and children after more than 12 months in Iraq.

Laskowski is survived by his two daughters and his wife, Jennifer. Wells leaves behind his wife, Tosha, and his three children, Stephen, Alex and Xavier.

Chief Warrant Officer 4 Gary Jones, who knew Wells from a previous tour in South Korea, said his friend was &#8220;first and foremost a devoted family man.&#8221; But he also was dedicated to the Army. He volunteered to come to Iraq.

Wells, who joined the Army in 1993, was known for his contagious sense of humor and ability to keep a positive attitude.

Laskowski, who entered the military in 1990 as a Navy UH-60 crew chief before joining the Army in 2000, was known for his big stature and was a huge presence at the base&#8217;s weight room. Many soldiers looked upon him as a big brother.

His roommate, Chief Warrant Officer 2 Chris Weaver, said Laskowski attacked life with &#8220;an energy rarely seen&#8221; and cared very much about the men on the ground he supported, flying more than 600 combat hours in Iraq.

Weaver, who considered Laskowski a brother, ended his eulogy on Friday by telling the story about how his roommate would always play the message his daughter left on the picture frame.