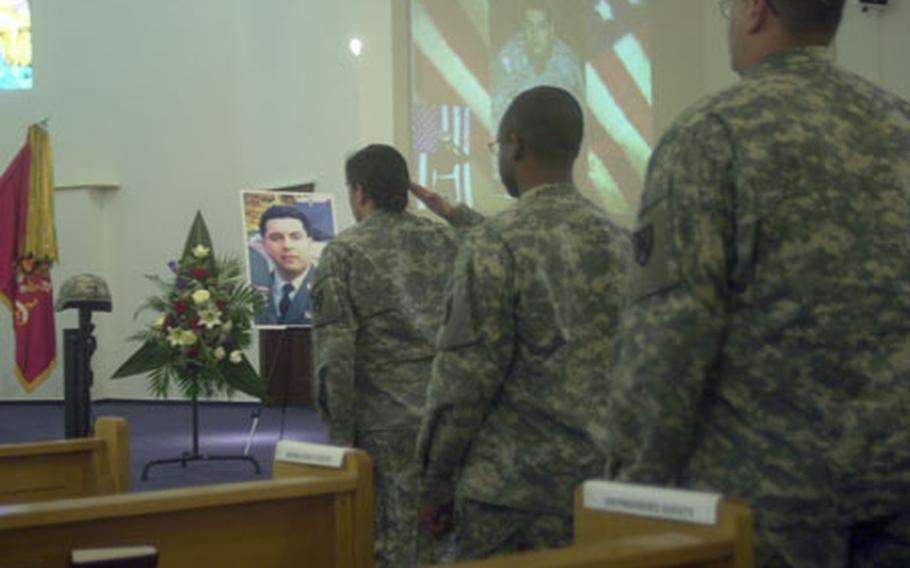 Soldiers with the 21st Theater Support Command salute the helmet, weapon and boots of Spc. Daniel Zizumbo on Tuesday afternoon at his memorial ceremony in Kaiserslautern, Germany. Zizumbo, 27, of the 1st Cargo Transfer Company, died as a result of a suicide bomb blast Feb. 27 at Bagram Air Base, Afghanistan. (Steve Mraz / S&S)

KAISERSLAUTERN, Germany &#8212; A faint scent of gunpowder from the firing of volleys drifted into Daenner chapel Tuesday afternoon as taps played in honor of Spc. Daniel Zizumbo.

Soldiers packed into the chapel on Daenner Kaserne to bid farewell and render respect to their comrade.

Zizumbo, 27, died Feb. 27 at Bagram Air Base, Afghanistan, of wounds suffered in a bomb explosion. He was killed in the suicide bomb attack at Bagram on the day Vice President Dick Cheney was visiting the base. The attack also killed a South Korean soldier, a U.S. contractor, five Afghan civilians and the bomber, the military said.

Maj. Curtis Johnson, 1st Cargo Transfer Company commander, said Zizumbo enjoyed being a soldier. Johnson said he was honored to have a soldier such as Zizumbo serving in his command.

&#8220;Soldiers like him protect the freedoms of the elderly, the young and those people who cannot be a warrior for some reason or another,&#8221; Johnson said. &#8220;We need to remember that these sacrifices &#8212; a loss of a warrior &#8212; are not in vain. Our loved ones, our children, are free and safe from the horrors that are happening in other parts of the world.&#8221;

A little more than a year ago, Zizumbo arrived at the Kaiserslautern-based Cargo Transfer Company. He deployed to Afghanistan in late June 2006.

Zizumbo had been in the Army for about 1&#189; years and previously served in the Marine Corps for four years, Jones said.

&#8220;I remember Specialist Zizumbo as being a person of pride and integrity, and as a soldier who believed in what he was doing,&#8221; she said. &#8220;I know he was proud of being in the military, and I, along with all my fellow comrades, owe him a debt of gratitude we will never be able to pay.&#8221;

Zizumbo&#8217;s awards include the Bronze Star Medal, Purple Heart, Combat Action Badge and Army Good Conduct Medal. He is survived by his mother, Julia, and his two sisters, Licci Zizumbo and Jocelyn Landa, of Chicago.