Soldiers examine a disabled Humvee in Zabul province during a mission Tuesday. Hours later, a rescue truck arrived to take them back to Forward Operating Base Laghman. (Anita Powell / S&S)

Soldiers examine a disabled Humvee in Zabul province during a mission Tuesday. Hours later, a rescue truck arrived to take them back to Forward Operating Base Laghman. (Anita Powell / S&S) 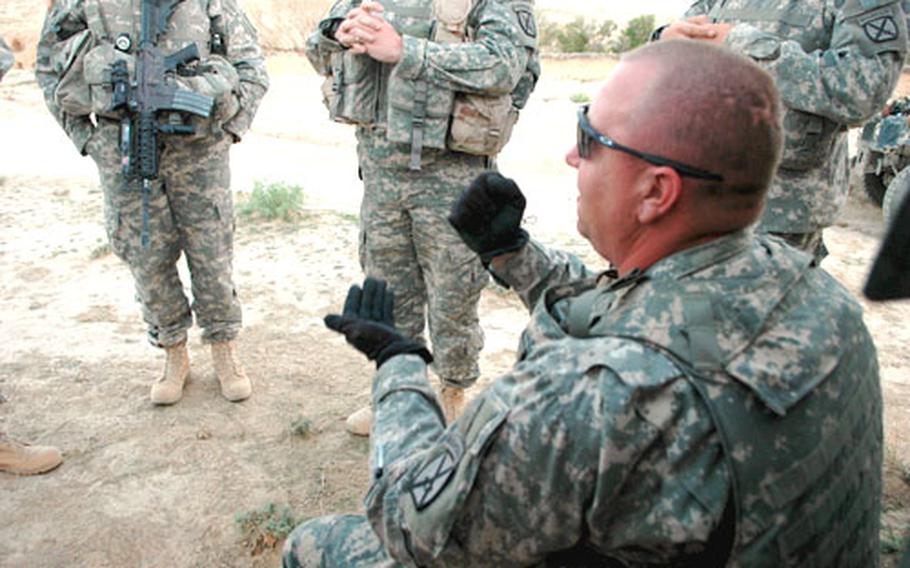 1st Lt. Brian Gaddis uses the "rock, paper, scissors" method to determine which vehicle will take the lead on the trip back to Forward Operating Base Laghman. Gaddis won and led the convoy on the long, bumpy ride back to the base. (Anita Powell / S&S)

The Fort Polk, La.-based company, part of the 10th Mountain Division, controls the battalion&#8217;s largest swath of territory, but is the only company in the battalion that hasn&#8217;t fought enemy forces in its first month in Afghanistan.

What was to be a routine daylong patrol recently turned into a compendium of wrong turns, breakdowns and hours upon hours of waiting.

The day began auspiciously enough as members of the unit prepared to charge down the province&#8217;s main freeway and then visit a tiny, out-of-the way village to speak with leaders about security concerns.

Company executive officer 1st Lt. Brian Gaddis, a former enlisted soldier whose Texas accent and fast-clipped speech often make him sound like a rodeo auctioneer, drawled over the radio and poked fun at the other men in his Humvee.

&#8220;Can we stop and let my grandma off and let someone else drive?&#8221; he joked as the convoy of Humvees tumbled through the city of Qalat at a maddeningly slow clip.

As the group neared the village after three hours, one of the Humvees lost a tire as it barreled through a narrow rut. The convoy lurched to a stop.

Soldiers got out to examine the damage and sling profanities at the wayward tire and lopsided Humvee.

Gaddis radioed for help, which he said would come in no less than four hours.

Infantrymen stood around, told jokes, talked about women and stared at the horizon, hoping to draw some &#8212; any &#8212; action, which most young soldiers said they would welcome.

Gaddis dismissed the likelihood of an attack in such an open location.

Several also reflected on their decision to join the infantry.

Sgt. Gary Robertson taunted his colleagues with what he dubbed the &#8220;Robertson Curse.&#8221;

As darkness fell, the mood changed from levity to impatience as soldiers pondered the possibility of camping out for the night.

Spirits rose when the glow of headlights appeared over the ridge. They fell again when the tow truck, which was by then less than 250 meters away, nearly lurched off the edge of a narrow path and teetered there for an excruciating 15 minutes before being coaxed back onto the road.

As mechanics slowly attached the Humvee to the truck&#8217;s tow bar and the convoy prepared to make the slow and arduous journey back to the base, Gaddis gazed back at a clump of mud houses about 600 meters away.