Unit fights the forces of boredom in Kuwait 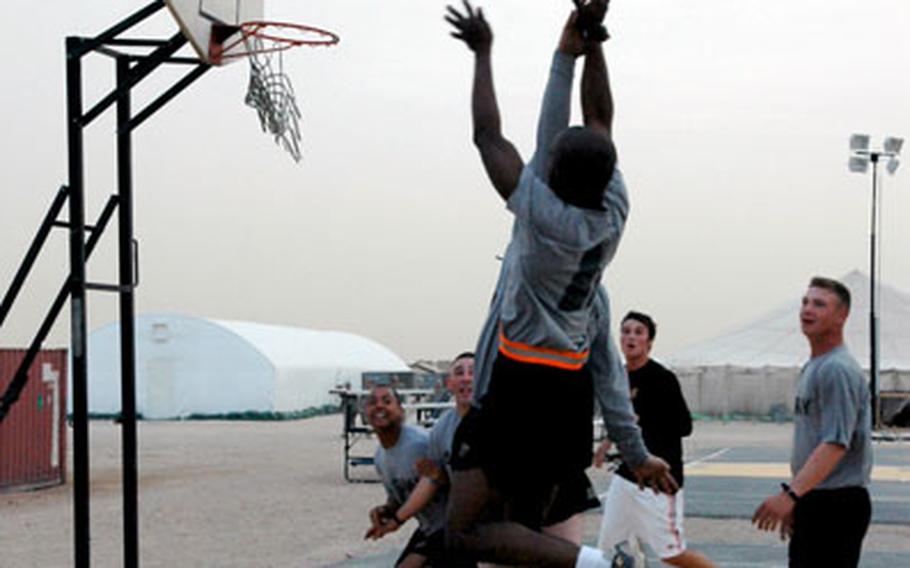 &#8220;Whoa. &#8230; That was violent. That was pretty cool,&#8221; Gentry, a private first class, said as he and several others watched and played the video game, called Halo, at the recreation tent here on a training base south of the Iraqi border.

The shoot-&#8217;em-up video game could be as close as Gentry gets to combat this year. As one of the nearly 3,500 troops with the Baumholder, Germany-based 1st Armored Division&#8217;s 2nd Brigade, Gentry has been here for nearly two months while his unit, originally expected to go into Iraq, has been in a holding pattern &#8212; deployed and away from home, but outside Iraq with no enemy nearby.

As a result, video games are just one of many nonmilitary activities that the soldiers here devise to help pass the time between their ongoing training drills and maintenance programs.

&#8220;Our biggest challenge here is just trying to fight boredom,&#8221; said Spc. John Holt, a 27-year-old medic, as he was waiting to watch a copy of the movie &#8220;Roadhouse&#8221; on one of the televisions at the newly expanded facility for Morale, Welfare and Recreation.

In the midmorning, a line at the &#8220;Green Beans Coffee Company&#8221; stretches out the door as dozens of soldiers line up to get cappuccinos, frappes and pastries. In the middle of the afternoon, dozens of soldiers turned out one day last week for a 3 p.m. showing of &#8220;The Wedding Crashers&#8221; and more than 50 had signed up for a midafternoon video game tournament.

In the evening, throngs of soldiers &#8212; mostly men and an assortment of women &#8212; mill about the gravel plaza and covered benches outside the PX and fast-food trailers, chatting and smoking cigarettes.

The facility here is designed for a two-week training regimen for soldiers to do last-minute checks before heading into Iraq. The 2nd Brigade soldiers often fill their days with ongoing training and equipment maintenance, which keeps them ready to move north on command if their units are needed.

&#8220;At first, I thought it would, but then seeing the soldiers and how professional and disciplined they are, it really hasn&#8217;t affected them,&#8221; Anderson, the brigade executive officer, said.

Anderson said the commanders continue to plan for a range of possible missions that may include bringing the entire brigade or a portion of it into Iraq later this year. Formally, Army officials say the 2nd Brigade should expect to stay in Kuwait for an entire year, serving as a rapid response force for any regional crisis in Iraq.

But a trickle of unofficial and unconfirmed information leads many soldiers here to believe that, come spring, Army officials may consider sending some or all of the brigade back to Germany this summer.

Meanwhile, the soldiers remain in between two worlds &#8212; confined to a desert camp and with a mission to stay prepared, but far from the actual fight many had expected.

Some soldiers fill their time with religious activities.

&#8220;I personally spend a lot of time in church,&#8221; said Chief Warrant Officer Kenneth Hick, 34, head food adviser for the brigade. In addition to Sunday services, he goes to several Bible studies in the evenings.

Capt. Matthew Kreider, a chaplain with 2nd Brigade, said attendance at Bible study programs continues to grow as soldiers spend more time here in Kuwait, which he attributes to the combination of free time and the looming possibility of combat that typically sparks spiritual concerns.

For many, however, video games are the most popular diversion.

Sgt. Charlie Robinson touts himself as the best &#8220;Halo&#8221; video game player in his company, and his time in Kuwait has afforded him time to hone his skills.