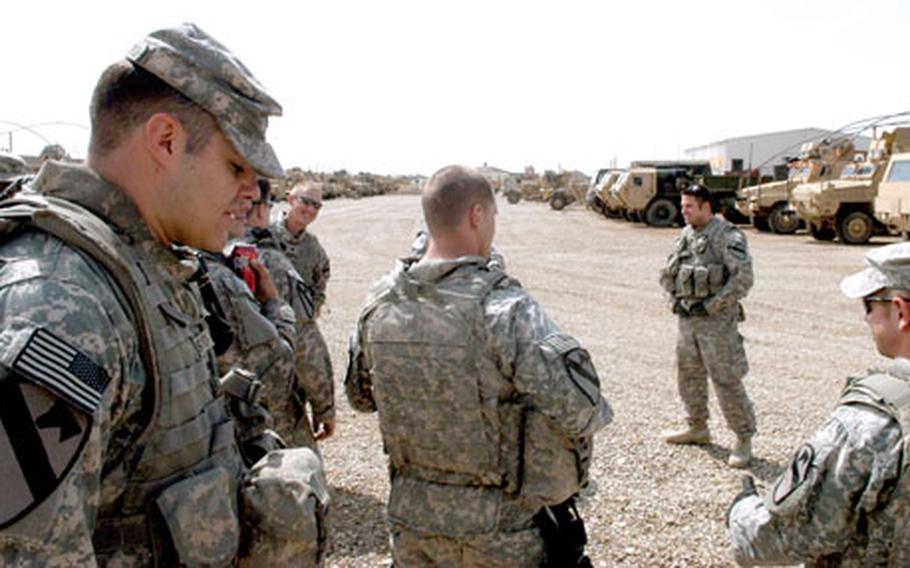 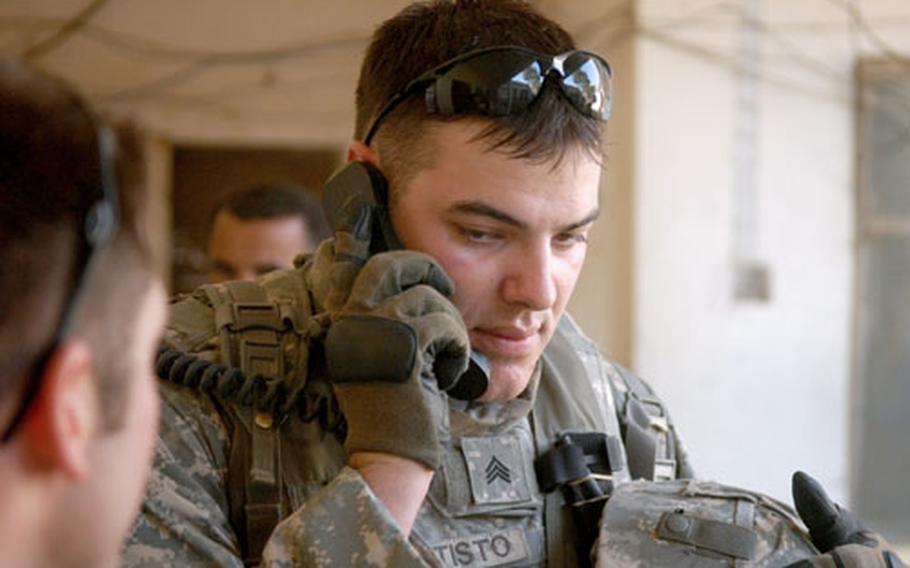 Sgt. Stephen Battisto said leaving your guys behind and getting out of the war zone mid-deployment, for leave or injuries, is excruciating. “I never felt so wrong as a person, because I was not there for these guys.” (Geoff Ziezulewicz / S&S) 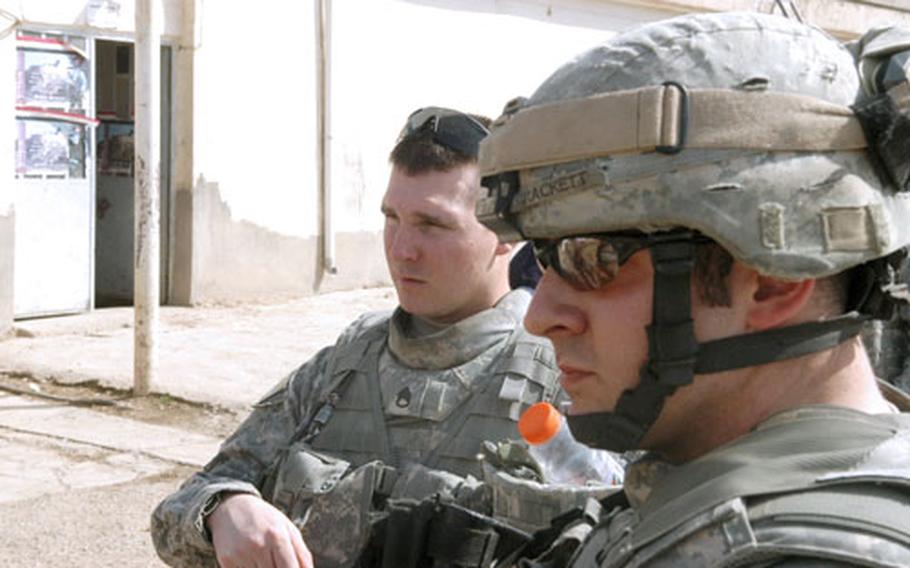 Sgt. Bradley Brackett, right, and Staff Sgt. David Earls on patrol in Kirkuk. Brackett, Earls and the other men of Crazy Horse Troop, 4th Squadron, 9th U.S. Cavalry Regiment who deployed together last time to Iraq say an unbreakable bond forms between guys in their situation. “You may not like the person, but you’ll work with this person and give your life for this man, every time,” Brackett said. (Geoff Ziezulewicz / S&S) 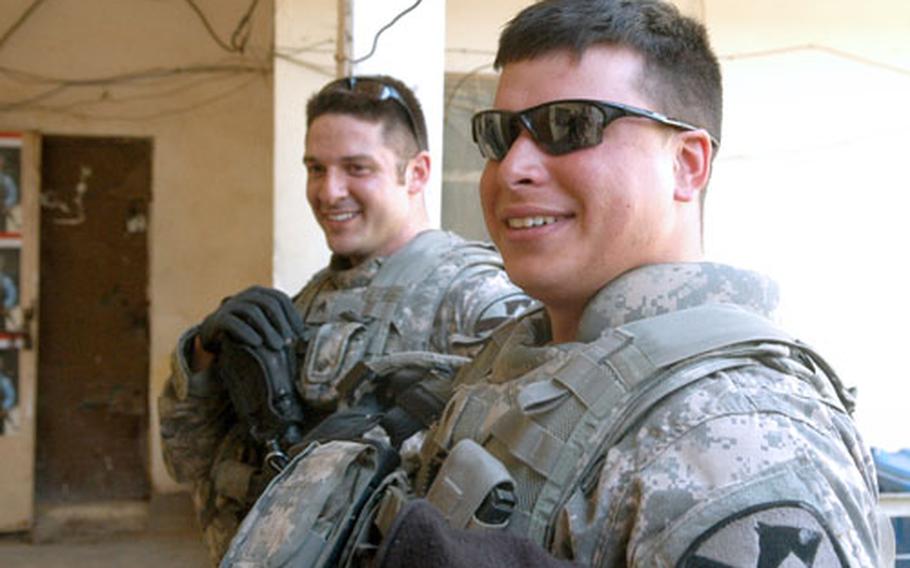 Spc. Patrick Maurer, right, and Sgt. Bradley Brackett, both of Crazy Horse Troop, 4th Squadron, 9th U.S. Cavalry Regiment, hang out during a mission earlier this year near Kirkuk, Iraq. Brackett, Maurer and other troops soldiers said the bond of brotherhood they’ve formed while on two deployments is unlike anything else. “I have an identical twin brothers, we’ve been close our whole life,” Brackett said. “He wouldn’t understand. He’s not been in.” (Geoff Ziezulewicz / S&S)

Call it what you want. Band of Brothers. The Brotherhood of Combat. It&#8217;s a familiar concept these days as America&#8217;s sons and daughters fight on two fronts. Even for people who don&#8217;t fight the wars.

It&#8217;s an unbreakable trust and kinship forged as men push their brains and bodies to the limits each day, together, in an environment that won&#8217;t forgive them should one man mess up. One guy keeps the next guy going, to keep all the brothers from falling.

That bond is found in shared sweat, blood and Gatorade, and in a can of chew passed around before a patrol, be it on an unfathomably smelly Baghdad street or high in the Afghan mountains.

It has been marketed and sold to the American public in films and video games. It&#8217;s widely known, but few actually know it.

Spc. Patrick Maurer knew it one day in Iraq during his last deployment, from October 2006 to January 2008, that saw him and his boys, among other missions, taking back Baghdad&#8217;s hellacious Haifa Street.

It&#8217;s not just him, he said. All the guys in Crazy Horse Troop, 4th Squadron, 9th U.S. Cavalry Regiment are tight. Maurer just learned it one day in Iraq.

Right after that, the soldiers were attacked, Maurer said. Explosions were going off all around them.

"These guys grabbed me and we hauled ass into a building," he said. "These guys are high speed as hell. They&#8217;ll protect me in any situation. I was confused during my first deployment and these guys were on it.

"I felt completely confident that I would get through that night," he said. "No issues."

Everyone in Maurer&#8217;s troop are his guys. But Staff Sgt. David Earls, Sgt. Stephen Battisto and Sgt. Bradley Brackett are his boys.

They&#8217;re on their second deployment together, building on the friendship and trust they developed during their last trip, when Iraq was a lot different.

"They&#8217;re like my brothers," Earls, 29, said. "If something happens to them, I feel extremely sorry for the person who does something to them."

In and out of combat, Maurer, Earls, Brackett and Battisto have been there for each other. Putting your life in another man&#8217;s hands, and putting his life on you, does that.

While the whole troop is a family, those outside can never get it, Brackett said.

Battisto, Brackett, Earls and Maurer met each other in 2005.

Maurer launches into his Earls impression from back then.

"Maurer! What the hell are you doing?"

Brackett, Earls and Battisto crack up. Maurer&#8217;s the funny guy.

"It was just like, him messing with me all the time," Maurer said. "I was told when he came to the troop that I was going to have to help him become part of the platoon. It&#8217;s the complete opposite. This man squared me away in every way possible for the longest time."

They did a lot of things during their last deployment, but they speak most proudly of taking it to the gangs of Haifa Street.

"We went out and found the enemy, and destroyed the enemy," Earls said flatly. "It was just different groups on the street, a lot of murders. When we took the street over in January, there were 77 murders per month. When we got done in February with that mission, there were two murders in one month.

"When you see kids not scared to go outside, you know you did your job," he said. "You took out the threat. Not just for yourself, but for innocent people."

Battisto earned the Bronze Star with "V" for valor for a particularly hellish encounter, when he saved the troop commander&#8217;s life.

The soldiers followed the man into a smaller part of the alley, where he disappeared.

Retired Lt. Gen. Robert Foley was a young captain in charge of a rifle company in Vietnam. A Medal of Honor recipient, he knows a thing or two about heroism and the bonds of war.

&#8220;I kept asking myself as a company commander in Vietnam: What is it that motivates these soldiers to do what they have to do every day on the battlefield? We were going on combat assaults, we had stay-behind ambushes, we had requirements for soldiers to go down into tunnels &#8212; we called them tunnel rats. You know, I never ran out of volunteers? And it was always a volunteer that had to be a tunnel rat. But soldiers would come runnin&#8217; up, and say, &#8216;Sir? I got it. My turn.&#8217; &#8221;

The guys know it won&#8217;t be like this forever. Life has other plans for each of them.

Everyone laughs. Much of Maurer&#8217;s family is Air Force.

Battisto, Brackett, Earls and Maurer saw the same bonds among their sergeants as younger soldiers during their last deployment.