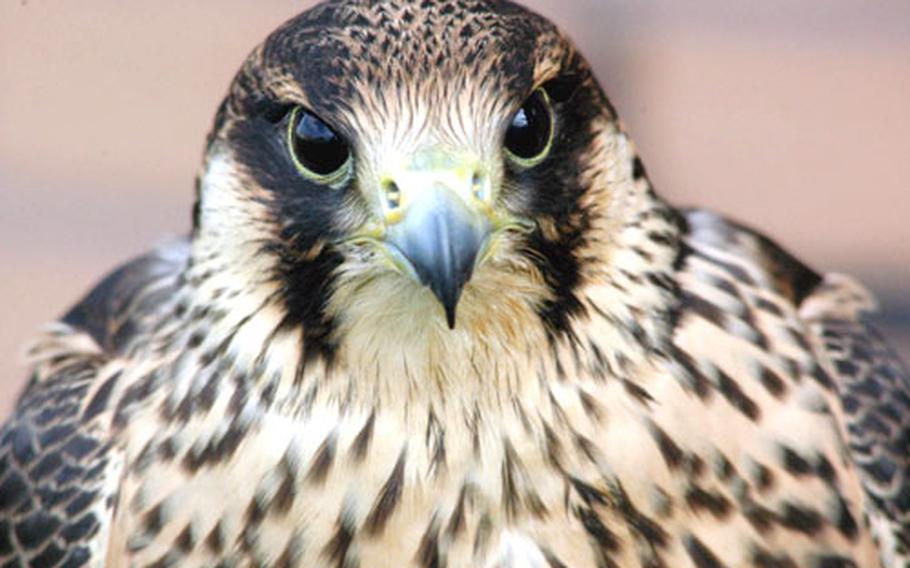 One of Keith Mutton&#39;s most deadly birds, Scarlet, the young peregrine falcon, foregoes any scare tactics and is used strictly for hunting around the airfield. (Ben Murray / S&S)

One of Keith Mutton&#39;s most deadly birds, Scarlet, the young peregrine falcon, foregoes any scare tactics and is used strictly for hunting around the airfield. (Ben Murray / S&S) 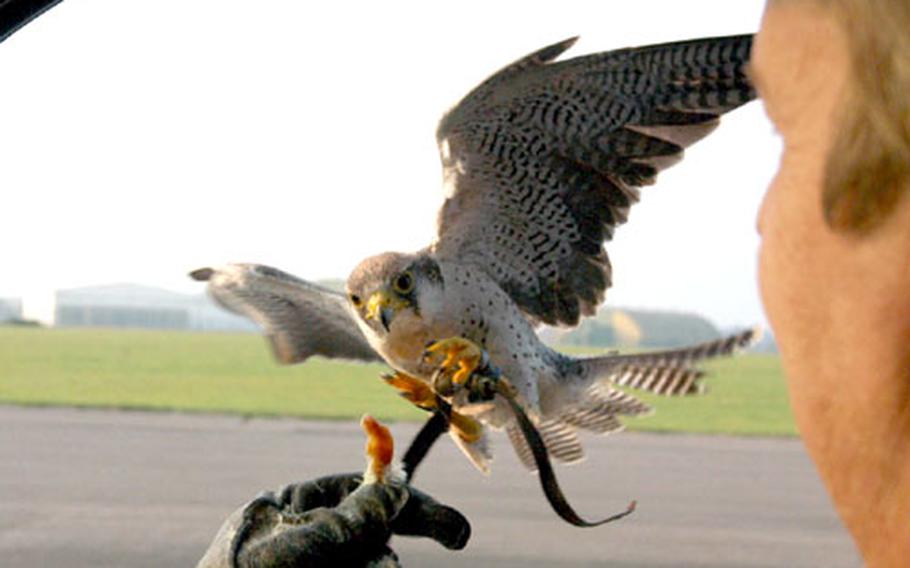 Pip, a lanner falcon, prepares to land on Keith Mutton&#39;s hand, in which he is holding a morsel of food. (Ben Murray / S&S) 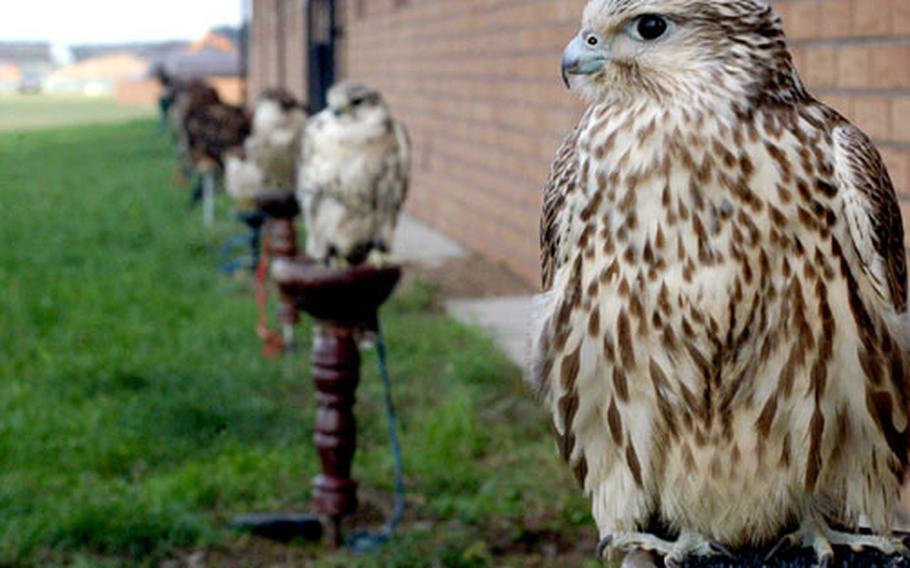 Lined up for flight, Jack, the Gyr-Saker falcon, and a dozen of his compatriots rest on perches facing the landing strip at RAF Lakenheath. (Ben Murray / S&S) 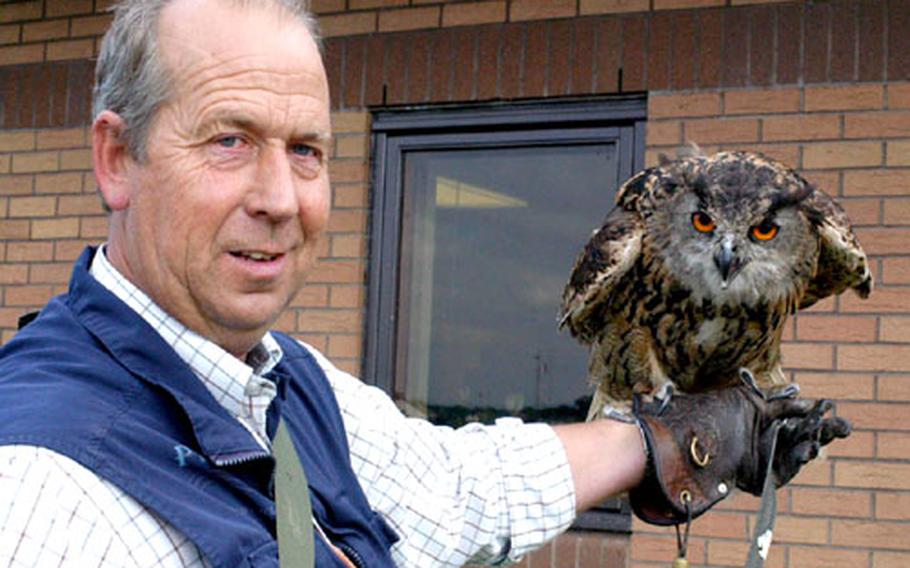 Keith Mutton, owner and operator of Phoenix Bird Control Services, stands with one of his oldest employees, Twinkle, a 17-year-old European eagle owl. Twink, as he calls her, responds to voice commands, and even recognizes her own name. (Ben Murray / S&S) 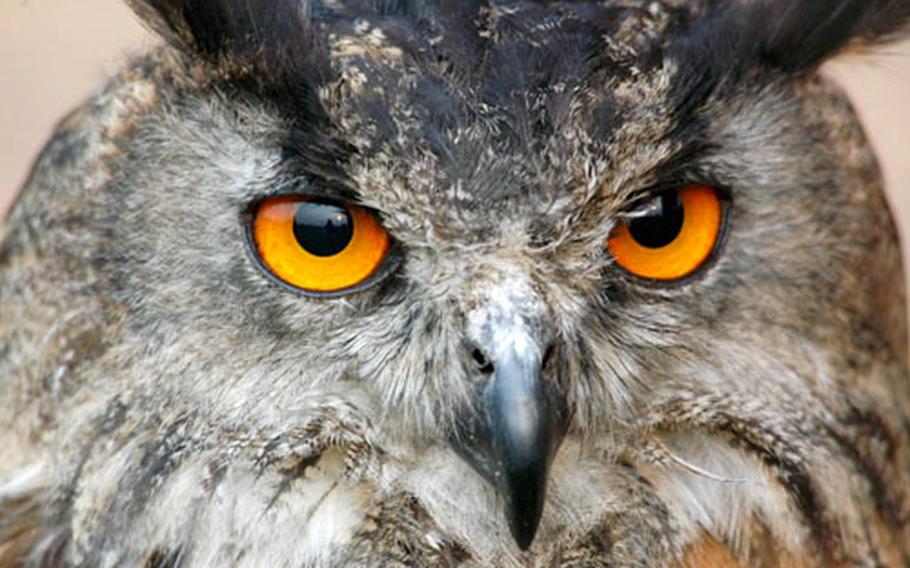 Twinkle, the experienced night stalker of Keith Mutton&#39;s arsenal of avian predators, displays the vibrant targeting system she uses to hunt down unwary birds trying to sleep on the runways. (Ben Murray / S&S)

RAF LAKENHEATH &#8212; Keith Mutton slips the tether on his most effective weapon against unwanted birds around the RAF Lakenheath runway.

Driving slowly down the landing strip in a cluttered blue van, Mutton breaks off from a cheerful narrative about the air base to look warily down at his left hand, then edges it slowly toward the open window as though anxious to get rid of something.

Perched there, on the fingers of a thick leather glove, is a small but lethal-looking brown bird called a lanner falcon. From the way Mutton is eyeing it, the 1-foot-tall package of feathers, beak and talons apparently has decided to get out of the van.

Molded by millennia of evolution to seek and destroy its avian cousins, the bird in Mutton&#8217;s hand is one of the fastest and most agile in the animal kingdom.

So as Mutton prepares to let it go, there is the slight air of doom in the van, that the chirping days are likely over for some unfortunate little starling on the airstrip.

Shoving it gracelessly out the window, Mutton releases the young male named Pip into the air, where it turns instantly into the wind, raps out a couple of wing beats, wheels on a wingtip &#8212; and promptly lands on the roof of the van, screeching its little lungs out.

The anticlimactic moment is one of the quirks of a bird-control program that in many ways goes against the grain of an Air Force known for the in-your-ear precision of its weapons and the ultra-high-tech capabilities of its aircraft.

Protected by advanced armaments and guided by state-of-the-art communications, the fighter jets and refueling planes at Lakenheath, RAF Mildenhall and RAF Fairford are shielded from &#8220;bird aircraft safety hazard,&#8221; known as BASH, by a feisty group of independently minded birds such as Pip.

Part of a squadron of about 50 falcons, hawks and owls under the care and tutelage of Mutton and his employees at Phoenix Bird Control Services, the young lanner has helped keep American aircraft at the three bases all but free of bird collisions near the airstrip for decades.

Though using birds of prey as the heart of a BASH safety program may seem primitive for a modern air force, Mutton&#8217;s system of teaching birds to work at high-traffic air bases &#8212; even while the planes are flying &#8212; is a delicate and complicated technique that no other American air base in Europe employs, Lakenheath officials said.

&#8220;We are unique in USAFE for the program we have here,&#8221; said Maj. Jamie Flanders, airfield operations flight commander for the 48th Operations Support Squadron.

And it&#8217;s necessary work: Airplane bird strikes caused the deaths of nearly 200 people in the past 20 years, and annually continue to cause millions in damage to civilian and military aircraft, according to Mutton&#8217;s Web site. Even at Lakenheath, where no serious incidents have occurred in recent memory, pilots have reported nine bird strikes in the past fiscal year &#8212; though none of them near the runway, said Master Sgt. Kimberlin Schneider, flight safety noncommissioned officer for Lakenheath.

Much of the credit for the success goes to Mutton&#8217;s signature ability to train raptors to work alongside aircraft in flight, launching them out the window of a moving vehicle, then calling them back to the window for a landing &#8211; while the van is still moving.

A gregarious older man with crinkled features and a pack of cigarettes at the ready, &#8220;the bird man&#8221; of the American airfields, as he&#8217;s known, has developed that technique over 30 years of working at the bases and a lifetime of raising and training raptors.

The process begins before a bird even hatches. While the egg is still in the incubator, Mutton said he talks to the egg and speaks the bird&#8217;s future name, blowing the whistle he will eventually use to call it. Once the bird hatches, Mutton almost immediately brings it to the airfield and sets it on the dashboard of the van to get it used to the aircraft and imprint the base as its home.

Imprinting himself as the bird&#8217;s &#8220;mother&#8221; and the airfield as its home territory, Mutton is able to let his birds fly without restraint just weeks after they hatch, he said. Using a whistle, and voice and hand commands to control them, he then moves on to tutoring them in the fine points of mass bird control.

Over the years, Mutton has developed an arsenal of birds raised and trained for different purposes: falcons for scare tactics and lightning raids, Harris hawks to patrol the hangars and the ends of the runways, and European eagle owls for &#8220;night ops.&#8221;

The goal, he said, is mainly to frighten the flocks of rooks, gulls, sparrows and other species attracted to the flat, open runway area, not to slaughter them wholesale. Most of the flying done by Mutton&#8217;s birds, especially the smaller falcons, is mainly for intimidation, he said, though all his birds do get practice occasionally hunting prey.

The tactic is effective, he said, because nuisance birds can become desensitized to many conventional deterrence methods, such as sirens, pyrotechnics, amplified distress calls and decoys &#8212; methods Mutton also occasionally employs.

But the silhouette of a peregrine on the wing never fails to induce panic, he said.

The effect was evident on a recent sunny Sunday at RAF Lakenheath. While shotgun blasts from the neighboring gun club crackled across the landing strip, thousands of birds collected around the runway, heedless of the noise.

But when Mutton fired up the blue van and crept toward the airstrip &#8212; without even taking a falcon out of the back &#8212; the mere approach of the vehicle sent the flocks squawking for the trees.

It&#8217;s that kind of effectiveness that has earned the bird man a place of respect at the American airfields.