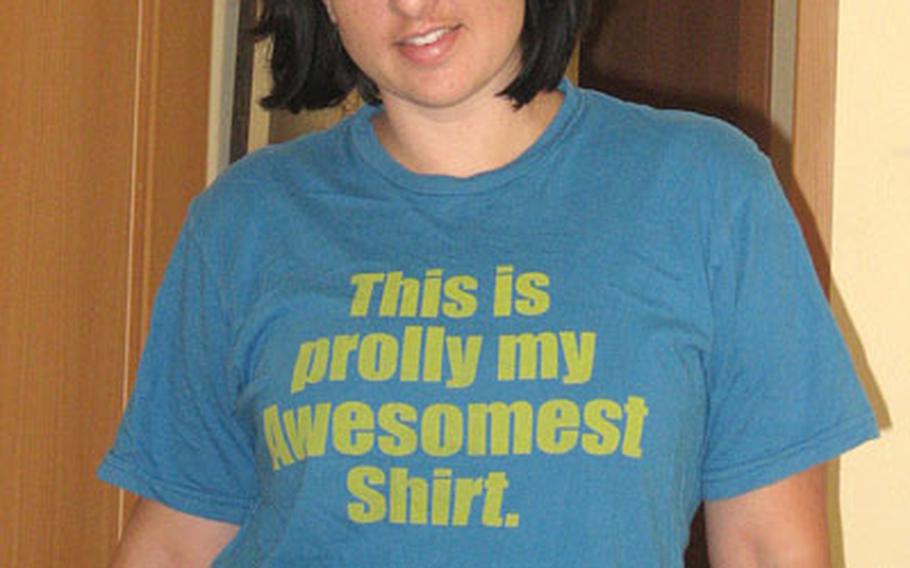 When not in uniform, you&#8217;ll likely find the Spangdahlem-based officer in ratty Converse tennis shoes instead of Prada heels. And if she does dress up, she breaks out her favorites: a pair of pink polka-dot heels.

Those who know her say her style of dress matches her personality: quirky, cute and comical.

The 27-year-old aircraft maintenance officer might just be the worst-dressed woman in America.

Kossow is one of 10 women selected as finalists for People magazine&#8217;s worst-to-best-dressed contest. Readers can vote on the publication&#8217;s Web site for the woman they think most needs some help in the fashion department.

Kossow said she has a shot because she has no fashion sense.

Kossow said her upcoming departure from the Air Force has put her in a &#8220;style crisis&#8221; because she is accustomed to wearing her military uniform every day. The California native prefers torn and baggy jeans, sweats and T-shirts.

In her biography on the Web site, she admits that putting a nice outfit together is not her strong suit.

Kossow said she entered the contest on a whim. Editors liked her entry so much that they asked her to send in a video, which the magazine edited down and posted on the Web site.

The magazine received thousands of entries before narrowing the field down to 10 finalists.

Every two days, the woman with the lowest number of Internet votes is eliminated. So far, Kossow has survived the first two cuts.

Her friends and co-workers at Spangdahlem Air Base are rallying around her, trying to drum up support.

They have set up a MySpace page featuring their friend in their kooky campaign to get her that makeover.

Janice Witten, an Air Force civilian who works on base, called the Spangdahlem-based officer one of the best people to work with but described Kossow&#8217;s look as a little &#8220;frumpy.&#8221;

The support has surprised Kossow. If anything, she said winning the contest would give her a great story to tell for years to come.