UNHCR preparing for further influx of Syrian refugees to Jordan 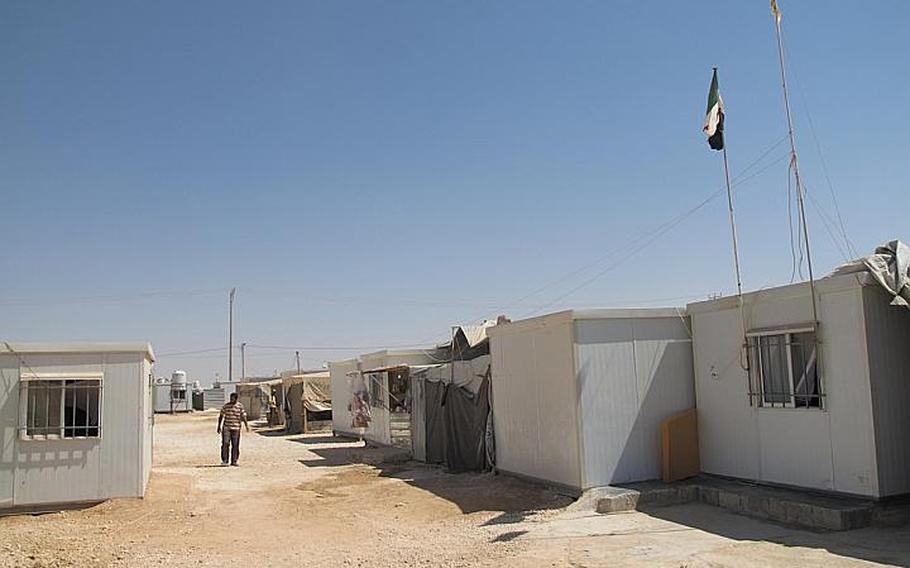 A typical ''street'' in the sprawling Zaatari camp in northern Jordan, which houses more than 140,000 Syrian refugees. A flag of the Syrian opposition movement flies over a collection of pre-fabricated huts donated by many Western and Arab countries. Many refugees welcomed the possible US airstrikes against Syrian forces in retaliation for a suspected chemical attack near Damascus last week. (Slobodan Lekic/Stars and Stripes)

A typical ''street'' in the sprawling Zaatari camp in northern Jordan, which houses more than 140,000 Syrian refugees. A flag of the Syrian opposition movement flies over a collection of pre-fabricated huts donated by many Western and Arab countries. Many refugees welcomed the possible US airstrikes against Syrian forces in retaliation for a suspected chemical attack near Damascus last week. (Slobodan Lekic/Stars and Stripes) 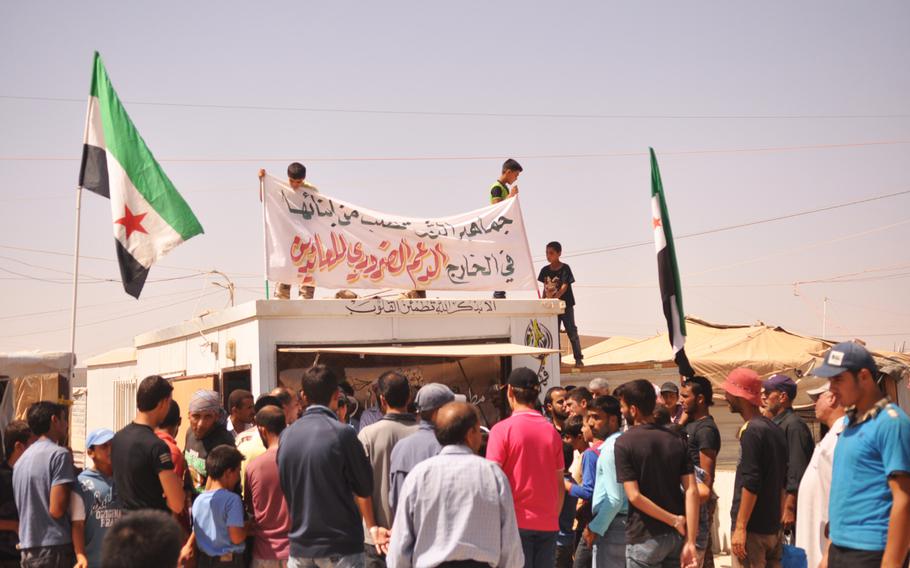 Demonstrators inside Jordan's Zaatari Syrian refugee camp gather in support of the Free Syrian Army, and rally other refugees nearby. Signs surrounding the demonstrators called for the international community to punish Syrian President Bashar Assad for allegedly using chemical weapons. Inside the camp, the overwhelming majority of refugees supported some type of U.S. military intervention in their home country of Syria. (Alex Pena/Stars and Stripes)

AMMAN, Jordan — When asked why they left Syria, refugees in Jordan echo one refrain: “It was unbearable.”

Between constant bombardments, heated battles over small towns, arrests, chemical weapons attacks and accusations of kidnappings and human rights violations on both sides, those who end up in bleak refugee camps say they had to leave or die.

It’s hard to imagine the civil war worsening. But the United Nations High Commissioner for Refugees is preparing for just that.

“The situation can degenerate significantly,” said Paul Stromberg, head of UNHCR operations in Jordan. “There are still large numbers of [internally displaced persons] in the country — four to five million at the latest estimates.”

If the war continues, some of those millions of people may flood into neighboring countries, overwhelming the international community’s ability to support them, Stromberg said.

Stromberg pointed out that tens of thousands of refugees have already decided to return home, even though UNHCR doesn’t endorse such returns because of the extreme danger civilians still face in Syria. He described it as a personal calculus, where people may go back to reunite with family members or check on crops. In some cases, fighting has subsided in refugees’ home villages.

That math could easily shift, he said, if food becomes unavailable or fighting returns to areas that are now largely peaceful.

UNHCR is preparing for that possibility by building an additional refugee camp in Jordan. The new camp, near the town of Azraq, 60 miles east of Amman, would be able to hold tens of thousands of people over and above the half-million already in the country.

Approximately 130,000 Syrian refugees are already living in a desolate desert camp called Zaatari just a few miles south of the Syrian border. Stromberg said the terrain around Azraq, an oasis on the main highway to Iraq, is even more inhospitable.

“I think they found the Mars Rover there the other day,” he quipped.

UNHCR has asked the international community for nearly $3 billion to support Syrian refugees throughout the Middle East. The Jordanian government has separately asked for an extra $380 million, according to UNHCR statistics.

The main aid donors so far have been the United States, the Gulf nations and Saudi Arabia.

Stromberg said the UNHCR in Jordan could easily use another $50 million to $75 million just to deal with the refugees living in Jordan outside the camps.

“If we have an influx of, say, 50,000 people right now, that would basically wipe [us] out,” he said. “It would be catastrophic from a budget perspective.”