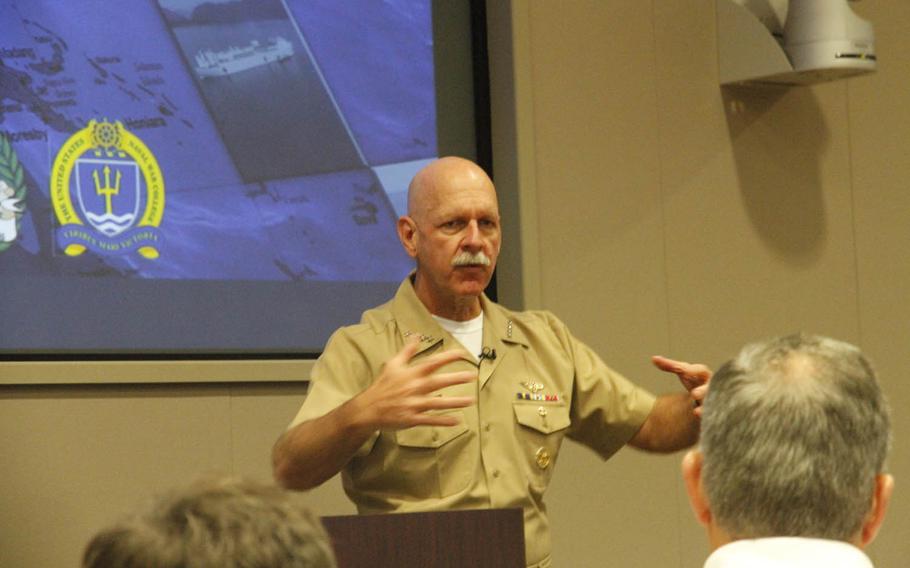 FORT SHAFTER, Hawaii — China’s militarization of disputed islands in the South China Sea won’t alter operations for the U.S. Pacific Fleet, whose ships have steamed a combined 700 days in those waters so far this year, the Navy’s top officer in the region said Monday.

“I’m interested — potentially to the point of fascination — about the element of militarization, but the fact of the matter is that it’s not going to make any difference to my operations,” Adm. Scott Swift, U.S. Pacific Fleet’s commander, told an audience at the Cooperative Strategy Forum held at the Asia Pacific Center for Security Studies in Honolulu. “We’ll continue to operate in accordance with international law in the South China Sea or any place else, just as we would globally.”

Swift was referring to a group of land features that are part of the Spratly Islands and claimed by China, the Philippines and a few other countries in the region. For the past year, China has been using dredged sand to expand those features into full-scale islands on which it is building runways and other facilities. Some U.S. officials have described the activity as militarization, a characterization disputed by China.

“If they were militarized, I don’t think that would change the United States’ approach or the Pacific Fleet’s approach any different than if they weren’t militarized,” he said.

Swift told the audience of maritime security academics and leaders from nine regional navies that he would be equally unperturbed if China declared an Air Defense Identification Zone over the islands. From an American perspective, he said, it’s very clear that a country implementing an ADIZ is reserving the right to identify vessels passing through the zone.

“It’s not an exclusion zone; it’s an identification zone,” he said.

In November 2013, China imposed an ADIZ over the Senkaku Islands, a chain in the East China Sea also claimed by Japan. American military aircraft have continued to fly there.

A South China Sea game-changer for the fleet would be if the disputed artificial Spratly islands were militarized and China then began enforcing an exclusion zone, preventing ships from entering.

“That would be an international issue if that were to happen,” he said. “If there’s an effort to exclude military aircraft — regardless of the origin of that aircraft or the nationality of that aircraft — that becomes a legal discussion, and it’s much more compelling.”

Swift said he’s troubled by what he hears from people living in the Pacific region regarding America’s naval capability.

Swift spent most of his hourlong forum appearance answering questions from the audience, and he frequently emphasized how the relationship between the U.S. and Chinese navies is deepening. On Sunday, three Chinese navy ships arrived in Honolulu for a routine port call, during which their sailors will spend time with American sailors.

Swift visited Shanghai in November when the U.S. guided-missile destroyer USS Stethem arrived at Wusong naval port, the first time a Navy ship had berthed at a Chinese military facility. He met with his counterpart in the People’s Liberation Army Navy.

But Swift seemed to share some of the angst felt by the region’s denizens regarding China’s lack of clarity in its claims and intentions in the South China Sea.

“The lack of transparency…” Swift said, pausing as he formulated his thought. “Tell me what the military zone is! We can’t even get to that point, just having that clear.”

Swift said he’d like to see China issue a diplomatic demarche that would outline its position on the South China Sea. Some Chinese officials have suggested that China has sovereignty over the entire sea, a claim shown on maps with a nine-dash line.

“So what’s the basis for that argument?” Swift asked. A demarche would be of great value because “once we have a codified approach that this is what one country claims compared to what the other country claims, then we can focus on the area that’s in contention. Right now, everything’s in contention. That makes it very difficult to figure out what the path forward is.”