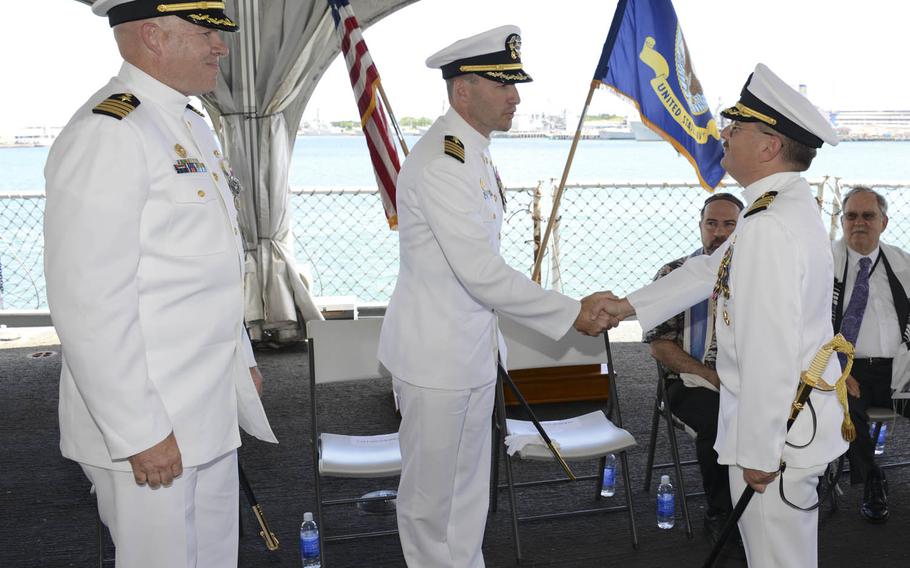 Capt. Howard Goldman, right, is congratulated by Capt. David Roberts, commanding officer of the Submarine Learning Center, as he relinquishes command of Naval Submarine Training Center Pacific to Capt. Michael Martin during a change of command ceremony in August 2014. Howard, who took command of Naval Undersea Warfare Center Newport Division in Rhode Island, has been fired after leadership problems. ()

The commander of the Naval Undersea Warfare Center Newport Division has been fired for leadership problems.

Capt. Howard Goldman was relieved of duty Wednesday because of a “loss of confidence in his ability to command based on findings of an investigation into a hostile work environment and poor command climate,” the Navy said.

Goldman, who had served as commanding officer of the Rhode Island division since November 2014, has been reassigned to Naval Station Newport, the Navy said.

“Command in the Navy is all about responsibility and accountability,” Goldman told the Navy Times Wednesday. “I was responsible to lead NUWC Division Newport and that leadership did not meet standards. I was held accountable. I accept that decision.”

Goldman took command of the submarine USS Toledo in 2006 and Naval Submarine Training Center Pacific at Pearl Harbor, Hawaii, in 2011, according to Navy records.

Capt. Geoffrey G. DeBeauclair, chief of staff for the Naval Undersea Warfare Center, will temporarily replace Goldman until a permanent officer is assigned.