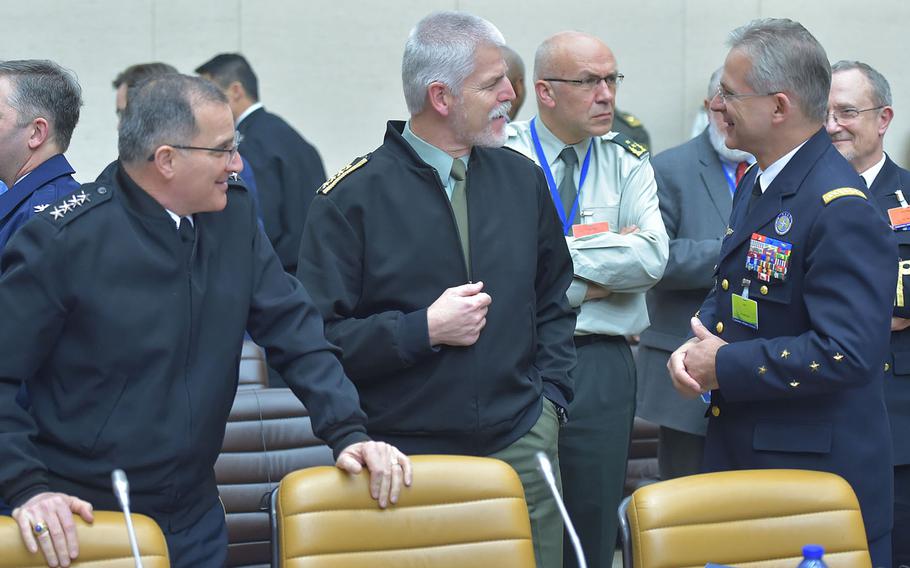 NATO’s top commander expects the alliance to play a larger role in counterterrorism efforts, signaling that allies could be prepared to place greater focus on an issue of concern for the incoming Trump administration.

“We do have capacity,” NATO’s Supreme Allied Commander Gen. Curtis Scaparrotti said Wednesday. “Those are the things I look forward to leverage to help the coalition and other nations.”

Scaparrotti was speaking after a two-day meeting of NATO’s 28 defense chiefs in Brussels. Participants examined progress in a plan to bolster the alliance’s presence in the Baltics and Poland, operations in Afghanistan and security concerns around the Mediterranean.

The meetings came at a time when NATO, after two years of busy action in response to Russia’s 2014 intervention in Ukraine, is facing criticism from President-elect Donald Trump. The incoming U.S. president in recent days described the alliance as outdated and not focused sufficiently on threats posed by Islamic extremists. He also reiterated his stance that most members are relying on America and not contributing their fair share in defense expenditures.

Those comments have sparked intense concern within the trans-Atlantic alliance.

Gen. Petr Pavel, chairman of NATO’s Military Committee, said the alliance was “as relevant today as it was before.” However, he acknowledged it could be debated whether NATO had adapted quickly enough in the face of new threats.

In the case of the battle against the Islamic State group in Syria and Iraq, NATO has not provided direct combat support, though many of its members are part of the U.S.-led coalition. Instead, the alliance has assisted in training Iraqi officers and has also deployed surveillance aircraft to help the coalition get a better picture of the battlefield in Iraq.

Scaparrotti, who also serves as head of U.S. European Command, said such efforts could become more robust, though he stopped short of saying he envisioned a formal combat role for NATO in that war.

“We in NATO have 28 nations with a process, a structure that enables us to collect and share information, to analyze information, and that is a powerful part of countering terrorism. We can reinforce that global network that is going on now,” he said.

Meanwhile, Scaparrotti said, the alliance is proceeding with its plan to position multinational battalions in the Baltics and Poland, which are designed to deter Russia.

Trump has not commented specifically on those plans, but they could conflict with his priority of improving relations with Moscow. Russia considers NATO’s buildup in the east a military provocation. Allies say the moves are defensive and in response to Russia’s aggression in Ukraine.