Under the Big Top in Munich, an Ed Sullivan Show 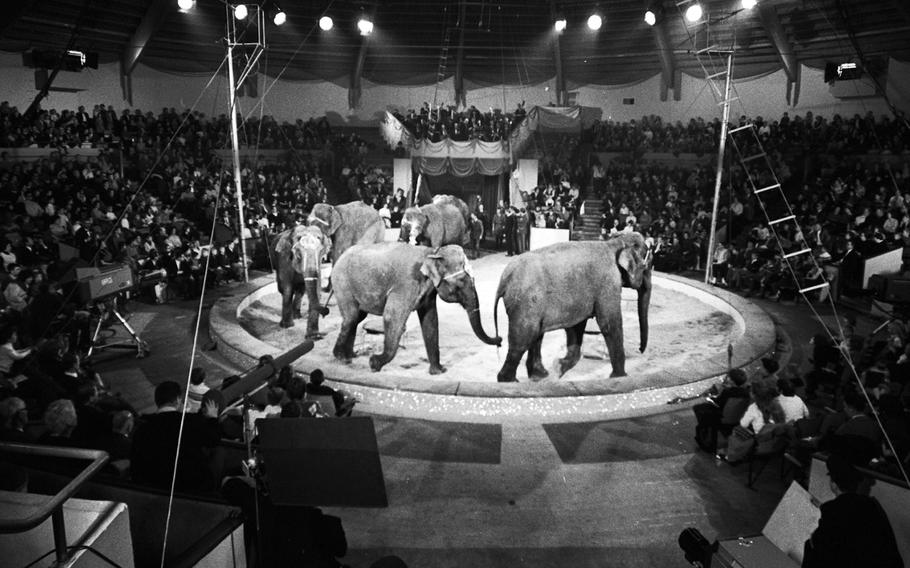 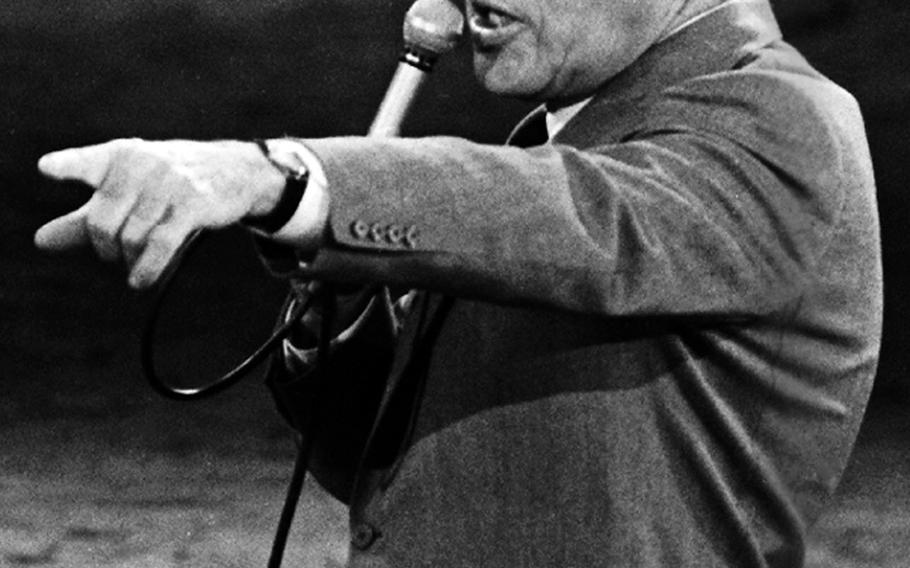 Buy Photo
Ed Sullivan meets his fans at the Circus Krone in Munich in November, 1965. (Red Grandy/Stars and Stripes) 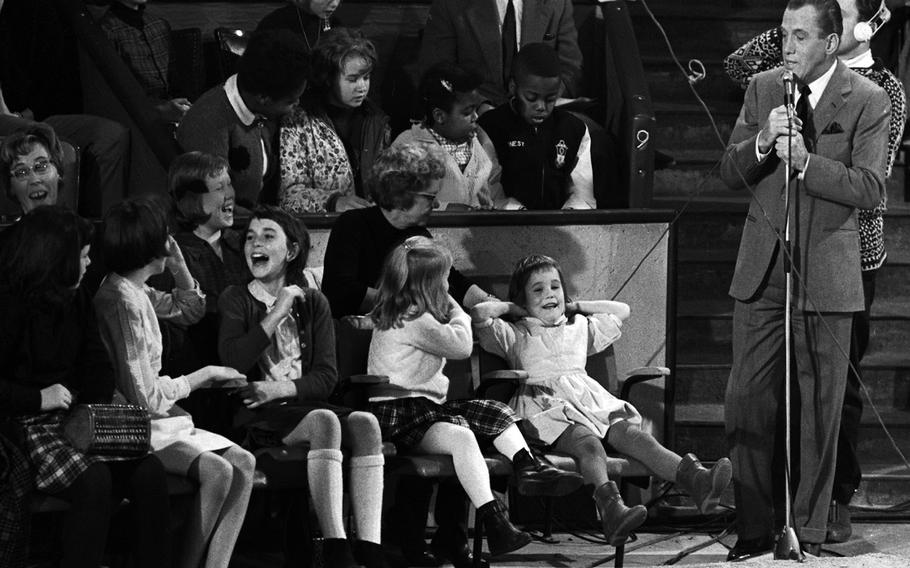 Buy Photo
Ed Sullivan with audience members at the Circus Krone in Munich in November, 1965. (Red Grandy/Stars and Stripes)

ED SULLIVAN in his weekly television spectaculars keeps them packed or tuned in and the veteran maestro doesn't see any end, particularly with the new emphasis on color.

"Color TV is a salvation for many and will prolong the life of numerous performers," Sullivan said, "and I should know, because I watch it very carefully. The lights wipe out the wrinkles and there is a great difference between color and black and white."

Sullivan has to be considered an authority, although his own show turned to color only about two months ago to mark another milestone in a record run that now has extended over 18 years.

When the grandfather of TV impresarios showed up in Munich to tape a pair of circus spectaculars for his weekly Sunday night series, it didn't shake the German population. But Americans — remembering a favorite back-home past-time — flocked to the Circus Krone to see him live and in action. The general feeling was: "He's the same smilin' Ed — but he looks shorter in person than I saw on the teevee screen back home."

This isn't the first time Sullivan has invaded Europe to obtain another production for his long-standing series. But "this is the greatest circus show ever put together. There's never been one like it — no one before could afford this."

Sullivan's reasoning is understandable, since he had assembled headline arts from more than 14 European circuses and taped two shows — the first ever done in color in Europe — for presentation back home after the Christmas holidays.

The star and master of ceremonies, 62-year-old Sullivan was clapping just as hard as all the others in the packed 2,800-seat arena. There never was a need to call for applause except to facilitate tape cutting and fill-ins after stage changes. "They're the greatest," he said, while rubbing tender palms, "but that is understandable since Europe is where circus life got its start."

An advocate of the one-ring type of circus, popular in Europe, Sullivan hopes to introduce rhythmic applause in America. "It is wonderful encouragement for the performers.

"The one-ring system is so much better than our three-ring setup, where you have one superior act and two not so good. Here you concentrate on one thing and don't have vendors pestering you every minute."

SULLIVAN plans more shows in Europe, not necessarily of the circus. "I hope to make some in London, Paris, and possibly one out of Rome. I also would like to go back to Moscow."

Getting back to his Munich circus productions, he said, "Circus show ratings far exceed most others. They are wonderful for my audience." That audience, in answer to a German newspaperman's question, numbers "better than 40 million."

Speaking of ratings, Sullivan was turned to another subject-the Beatles. "The kids like them . . . I can't find out what the kids go for ... There is no music to it."

Reflecting back to 1962, the New York entertainment and newspaper figure added, "You know we brought them over in February of [1964] for three shows. I paid them $8,000 then, but the starting price for one show now would probably be around $50,000.

"The Beatle rating, I guess was the highest I ever racked up, but my life was threatened by some parents for presenting them. Actually they, are very nice kids and well-mannered. Rex Harrison, who has been on my show many times, and comes from Liverpool too, explained this. There the mother and father are boss."

Sullivan has also presented the Rolling Stones on his Sunday night CBS show and pointed out, "When I stopped in London this time, I met the father of one of them. He works as a doorman at the Savoy Hotel."

Despite the week-in, week-out routine of producing live shows — Sullivan tapes only a few a year to cover vacations — the TV oldtimer is "feeling fine" and still going strong.

Asked about plans, he quipped, "I don't have any for going back to the hospital." This was in reference to an extended series of operations. One of the latest was for an ulcer, "which TV didn't help." Then he added, "I probably gave some to the audience, so I guess we're even."

What turned a former sports writer (circa 1920) to television? "Newspaper wages were among the worst and everyone needed a second job. I always got a kick out of the theater, and turned to radio. In fact Jack Benny made his debut on my radio show. I used to have guys like Jack Dempsey and baseball stars on the early program."

Actually Sullivan still has his finger in newspapering, with a twice-weekly column titled "Little Old Broadway." This touches on sports, Broadway figures and "generally is pegged to people in show business."

Sullivan was last in Europe a couple of years ago with his wife Sylvia on a vacation. Normally such excursions give him an idea or turn up a new act for the old American TV standby that at one time was known as the "Toast of the Town." The name was changed six or seven years ago.

Sullivan recalls a couple of trips. There was the time when he saw Victor Jullian's dog act in Copenhagen and approached him about coming to the States.

"It was a dark night and he was putting the dogs in their cages, etc., when I approached and asked `How would you like to come to America and show your dogs on TV?' He must have thought I was an insane American and answered, `Call me tomorrow.' But he eventually appeared on my show and I want to get him back again."

One of the other times Sullivan came to Europe was in 1961 when he entertained troops in Berlin. That all-star cast included Louis Armstrong, Connie Francis, Van Cliburn, Maureen O'Hara, Janet Blair and Sid Caesar. Sullivan also has a long history of entertaining servicemen during the wartime years.

SULLIVAN'S newspaper background, by his own admission, has been a big assist, "I could easily pick out highlights and didn't need anyone to put words in my mouth. I write all my own material even the commercial lead-ins and continuity. It also makes it easier to get along with people."

What about the switch to appearing before an audience?

"They called me Poker Face and some even claimed rigor mortis but I put the band up front as protection and the first line of defense." This isn't true today. Sullivan is a calm, cool, collected veteran of 18 years, with Ray Block and his orchestra in the background. Block also came along to Munich, as did nearly all of Sullivan's production staff, but Block formed the orchestra this time from Munich musicians.

As for cost, Sullivan and his director Bob Precht didn't bat an eye with "let's say around $100,000 for each show."