A Humvee rolls past one of many costly and newly constructed homes that have sprung up recently in the 9 Nissan Security District in east Baghdad. (Monte Morin / S&S)

A Humvee rolls past one of many costly and newly constructed homes that have sprung up recently in the 9 Nissan Security District in east Baghdad. (Monte Morin / S&S) A soldier with Company D, 1st Battalion, 8th Cavalry Regiment holds a rifle stock with a metal pipe taped to it during a recent patrol in the 9 Nissan Security District. The fake weapon belonged to the caretaker of a new housing project who could not afford a real rifle. (Monte Morin / S&S) A line of Humvees rolls through a new housing development in the 9 Nissan Security District. Many new and expensive homes have sprung up in former vacant lots in recent months, since the east Baghdad neighborhood is seen as being relatively safe. (Monte Morin / S&S) 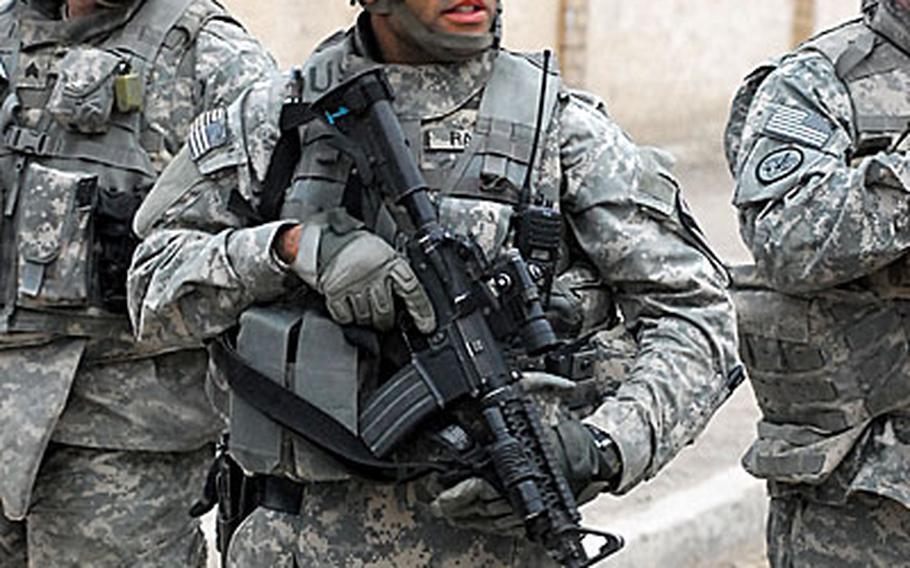 BAGHDAD &#8212; It is, by Iraq&#8217;s peculiar standards, among the quietest districts in a capital torn by sectarian conflict.

Named for the day that U.S. troops toppled Saddam Hussein&#8217;s regime four years ago, the 9 Nissan Security District &#8212; derived from April 9 in the Assyrian calendar &#8212; borders the Mahdi Army stronghold of Sadr City and was once home to Iraq&#8217;s main surface-to-air missile factory.

Yet today, roughly two months after the kickoff of the new Baghdad security plan, the district of 1.5 million mostly Shiite residents has seen a 70 percent drop in attacks and execution-style murders while also experiencing a phenomenal boom in housing construction.

The weekslong lull in violence may face its biggest test in the coming days as radical Shiite cleric Muqtada al-Sadr has called for mass demonstrations against U.S. forces on April 9.

Sadr, whom U.S. troops refer to disparagingly as &#8220;Mookie,&#8221; has called upon followers to fly Iraqi flags from every rooftop until U.S. forces leave the country.

In a district where militiamen encourage young boys to hurl rocks at Americans in hopes of instigating a bloody overreaction by soldiers, troop commanders are anxiously counting the days until the demonstration.

Anybody&#8217;s guessLt. Col. Jeffrey Sauer, commander of the 1-8 Cav, which is attached to the 2nd Brigade Combat Team, 2nd Infantry Division, said his troops, along with members of the 4th Brigade, 1st Division Iraqi National Police, have done much to root out or disrupt militia activity since the start of the security plan.

However, what happens in the coming days was anybody&#8217;s guess.

The character of Sauer&#8217;s area of operations, which is loosely referred to as New Baghdad, has changed dramatically over the last six months. When 1-8 troops first arrived here, they saw frequent attacks. Forward Operating Base Rustamiyah, the unit&#8217;s headquarters, saw daily mortar and rocket attacks.

The addition of new U.S. troops to the area and the creation of a handful of joint security stations and combat outposts in area neighborhoods &#8212; as well as an earlier call by Sadr for his militiamen to lay down their weapons &#8212; sharply curtailed such attacks.

One of the biggest indications of the area&#8217;s developing stability is a boom in the construction of new houses, commanders say. Vast fields that stood vacant in Saddam&#8217;s time have erupted with enormous, ornately designed homes, some worth hundreds of thousands of dollars.

Locals say many of the new residents are from Sadr City, which has grown extremely crowded, or from areas, such as Diyala, which have seen an increase in violence.

Coalition troops have used the lull to court residents here, befriending families living near outposts and proposing projects for schools and infrastructure. Commanders say they have for the most part received a warm welcome and generated an unprecedented number of tips.

Company commanders like Ramos said forging relationships with locals is key to the security plan&#8217;s success. Recently, he ordered his platoon leaders to search out and identify at least five local renovation projects in their sectors.

The prospect of improvements not only helps win the affection of Iraqis, it also ensures the safety of U.S. soldiers, he said. One example of that was the creation of soccer fields in areas where trash heaps and other debris could be used to hide roadside bombs.

Making the switch from kinetic to civil-military operations has been a difficult one for his troops, however.

To be sure, the 9 Nissan district continues to be a dangerous place for U.S. soldiers. In the last couple weeks, there has been an increase in attacks involving explosively formed projectiles, a particularly deadly form of armor-piercing roadside bomb.

The explosives, which U.S. commanders say are produced in Iran, have been used extensively along two routes connecting U.S. bases and combat outposts. The EFP threat along these routes is considered to be the biggest in all of Baghdad, if not Iraq. Last month, six of Sauer&#8217;s troops died in a roadside bomb ambush.

What happens next?Despite worries about what could happen in the coming days, some officers say Sadr&#8217;s militia has been so damaged they cannot mount a serious, sustained threat, not while U.S. troops remain.

Such was the message in a conversation one civil affairs officer had with a Sadr supporter recently in Obaidy.