Under former Navy commander, clarity on threats in Europe 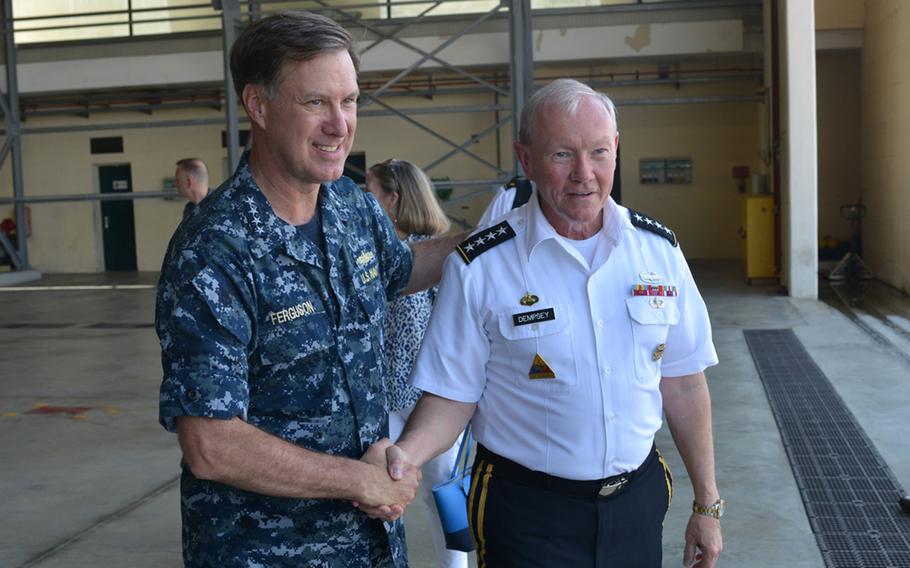 Adm. Mark Ferguson, left, commander of U.S. Naval Forces Europe-Africa, says goodbye to Gen. Martin Dempsey, chairman of the Joint Chiefs of Staff, following Dempsey's remarks to an audience of sailors at the Navy base in Naples, Italy, on June 11, 2015. Ferguson handed over command on Tuesday, June 7,2016, to Adm. Michelle Howard. (Steven Beardsley/Stars and Stripes) NAPLES, Italy — Adm. Mark Ferguson looks around the European theater and sees proof that the Navy is again taking the Continent seriously.

“There had been a belief in some quarters that this was the logistic transit point to go to other theaters,” said Ferguson, who on Tuesday ended his tenure as commander of U.S. Naval Forces Europe-Africa and handed over command to Adm. Michelle Howard. “Or that we didn’t have as great a demand for the high-end naval capability.”

That thinking may have disappeared during Ferguson’s two-year command. Where the Navy once spoke cautiously about Russian activities in European waters, it now touts its operations to counter them. Where it once observed the long-lasting migration crisis from afar, it is now preparing to join a NATO response in the Aegean.

Both changes are the result of circumstance and timing as much as Ferguson’s role. Russian submarines have snooped around transatlantic cables, and their aircraft have flown near U.S. aircraft and ships. Terrorist attacks in Paris, San Bernardino, Calif., and Brussels have turned the migration crisis into a national security issue.

Ferguson’s emphasis on high-end Navy operations has paced the response to Russia. The Navy regularly deploys aircraft, submarines and ships across the theater to reassure allies concerned about Russia. Its P-3 Orions operate out of Norway, Iceland, the U.K. and Romania. Its ships have been in the Black Sea and the Baltic Sea. Its submarines are more active than in recent years, Ferguson said.

At the height of the Cold War, the Soviet Union kept a permanent naval force in the Mediterranean, the Fifth Squadron, which could go head to head against the 6th Fleet. After the fall of the Berlin Wall this fleet was disbanded, and since then Russia’s maritime presence in the Mediterranean has remained limited compared to NATO’s naval operations.

“We have submarines everywhere right now,” said Ferguson, who is retiring from the Navy.

The U.S. Navy hesitated to take a role in the migration issue, citing its operations elsewhere, Ferguson said. But with traditional border patrols and coast guards unable to manage the massive flood of people into Europe, the Navy believes it can help fill a gap that terrorists threaten to exploit, he said.

“I think over time what’s evolved now is that we’re looking at putting a ship into this without degrading the capability of what we’re doing in these other areas,” he said.

When he returns to the States — his 24th move in 38 years since graduating from the U.S. Naval Academy — Ferguson will find himself in the middle of election season and a presidential campaign in which the value of NATO and other overseas alliances have been questioned.

Republican presidential candidate Donald Trump has maintained that the United States is paying too large a share of joint defense costs and that its European allies are not shouldering their fair share.

Cost-sharing will always be a difficult issue between the U.S. and its allies, Ferguson said.

Not so for U.S. engagement in the world, he said. “I would tell you that there’s no substitute for U.S. leadership.”