Under DOD plan, soliciting prostitute would be a career-ending offense 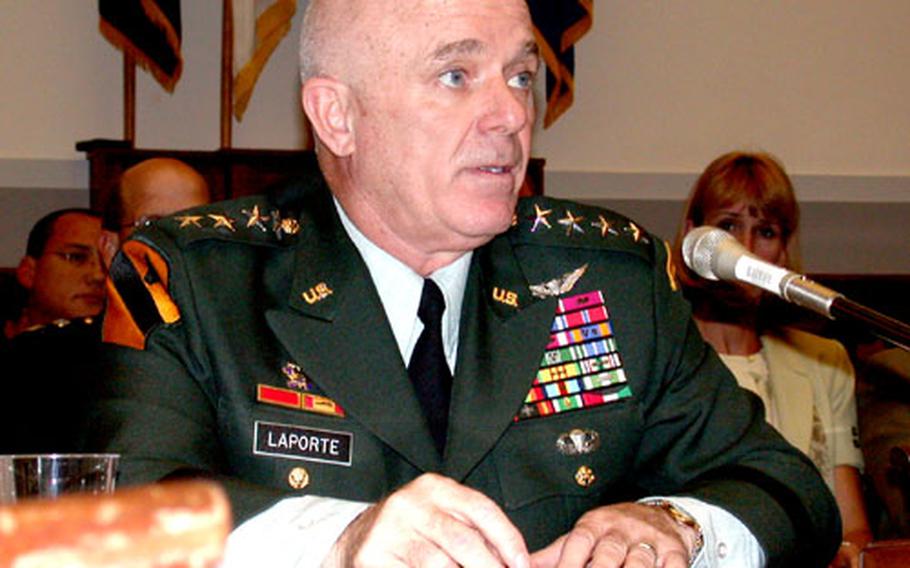 WASHINGTON &#8212; Sex sells. Next year, troops buying it could face dishonorable discharge and jail time under a proposed change to the Uniform Code of Military Justice, officials told Congress on Tuesday.

The Pentagon wants to add to the UCMJ a charge specifically addressing prostitution, and affixing a maximum punishment of one year of confinement and a dishonorable discharge for anyone convicted of paying a prostitute for sex, Charles Abell, principal deputy undersecretary for defense for personnel and readiness, told the House Armed Services Committee.

And if approved, the charge would be applicable even in countries where prostitution is legal, Abell said.

Abell anticipates the drafted Article 134 of the UCMJ will become military law early next year. It now is part of the 2004 annual review of proposed amendments to the Manual for Courts-Martial that began this month, and is undergoing the mandatory 60-day public notice and comment period after being published in the Federal Register, Abell said.

Making the change to the UCMJ makes the Pentagon&#8217;s policy of zero tolerance more real to the servicemember, Abell said. &#8220;It makes it more visible to that servicemember who might be tempted.&#8221;

Addressing prostitution will go a long way to tackling the problem of human trafficking, in which people are kidnapped and sole into virtual sex or labor slavery, Pentagon officials told Congress.

Worldwide, there are an estimated 800,000 men, women and children who are victims of human trafficking, with some 17,500 of them in the United States, said Ambassador John Miller, director of the State Department&#8217;s Office to Monitor and Combat Trafficking in Persons.

The Pentagon also is working to make UCMJ changes to address human trafficking, both for sex and forced labor. Changes could include disciplinary action against someone who fails to report suspected trafficking and jail time and a dishonorable discharge for partaking in such acts, he said.

And the officials said that they are working on getting the wording right so that the Pentagon could take contracts from companies whose employees are caught engaging in such acts, he said.

While prostitution and human trafficking are still problems, progress has been made, particularly in South Korea, said Gen. Leon J. LaPorte, commander of U.S. Forces Korea.

&#8220;As part of our aggressive, ongoing efforts to curb prostitution and human trafficking in this area, our increased law-enforcement efforts have also resulted in the prosecution of more than 400 servicemen for related offenses, such as curfew violation and trespassing in posed off-limits locations,&#8221; LaPorte said.

USFK has list of more than 600 bars, restaurants and clubs forbidden to U.S. military personnel, LaPorte said. In recent months, U.S. military police and security forces increased undercover operations to identify suspected sites of prostitution and human trafficking, and all incoming troops received training and information about the problem, how to combat it and what happens if they don&#8217;t, LaPorte told lawmakers.

Fighting prostitution has become easier in recent years now that about 60 percent all military is married, LaPorte said. But USFK still has boosted television and newspaper media spots and ads warning single 18- to 23-year-old men in the military about the problems prostitution can bring, LaPorte said.