Uncollected paperwork a sign of DMZ battle of wills 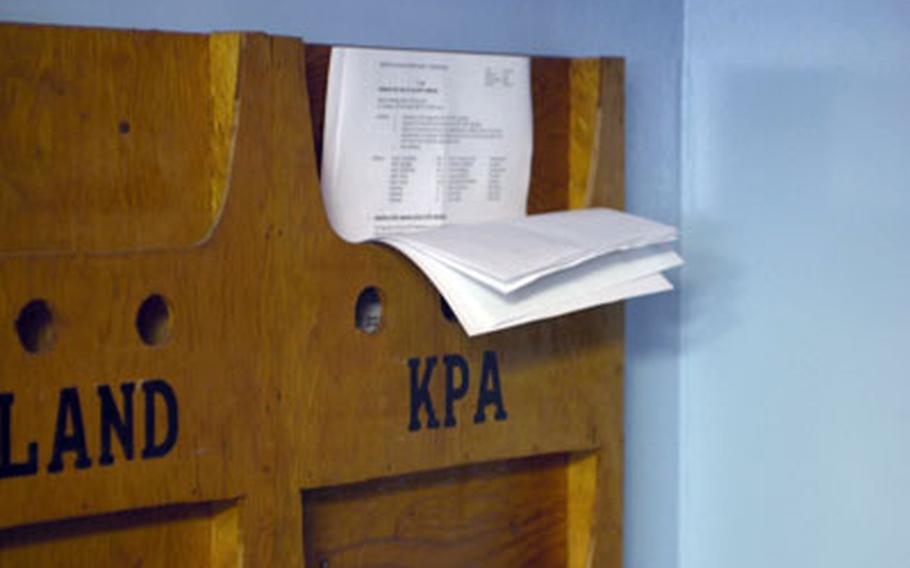 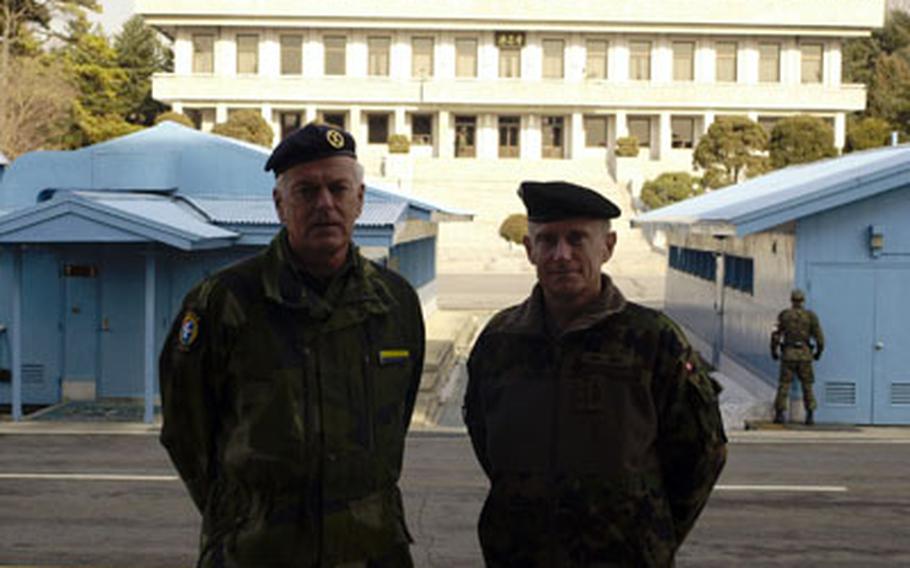 Buy Photo
Swedish Maj. Gen. Christer Lidstrom, left, and Swiss Maj. Gen. Jean-Jacques Joss, of the Neutral Nations Supervisory Commission, stand on the South Korea side of the Joint Security Area of the Demilitarized Zone on Jan. 24. They continue to lead five-member delegations from their countries in compliance with the armistice that ended Korean War hostilities in 1953. (Jon Rabiroff/Stars and Stripes)

DEMILITARIZED ZONE, Korea &#8212; Every week for the past 15 years, an armistice-monitoring group on the South Korean side of the DMZ has placed communications in a mailbox here for North Korean officials to read.

And every week for those 15 years, no one from the North has picked up the documents.

The wooden box &#8212; on a wall in a conference building on the Military Demarcation Line that divides the two Koreas &#8212; serves as a symbol of a quiet battle of wills being waged by North Korea and the Neutral Nations Supervisory Commission.

North Korea has refused since 1995 to recognize the existence of the commission on grounds that the body was formed through the armistice that ended Korean War hostilities in 1953 &#8212; a document the rogue nation says is no longer valid.

At about the same time, it went as far as forcing the Czech and Polish delegations &#8212; which were charged with monitoring adherence to the armistice in North Korea &#8212; out of the country.

Meanwhile, commission delegations from Sweden and Switzerland stubbornly continue to perform their duties of monitoring military activities in South Korea, as outlined in the cease-fire agreement, and leaving minutes of their weekly meetings in a mailbox marked "KPA" &#8212; for Korea People&#8217;s Army &#8212; just inside an unlocked door leading to the North Korea side of the DMZ.

While commission members suspect North Korean officials have sneaked occasional looks at the minutes over the years, the papers are never removed. Commission delegates simply take out the minutes from the week before and replace it with the latest meeting report. The minutes include the number of troops coming to and leaving South Korea, among other things.

The Swiss and Swedish generals on the commission say its a matter of honor and duty to follow armistice rules, even if one side doesn&#8217;t.

"It is a very important thing to be a country you can trust in and that sticks to its agreements," said Swedish Maj. Gen. Christer Lidstrom. "It&#8217;s the way we normally do business in our part of the world. We stick to the rules."

Added Swiss Maj. Gen. Jean-Jacques Joss: "Unfortunately &#8230; we don&#8217;t know what they do on the North side. But, we can say that in the South, we can do these observations. I think the rest of the world believes in us, and that is important."

To be sure, the commission&#8217;s role in keeping the peace on the peninsula has largely been ceremonial for decades, but Lidstrom and Joss believe their delegations could play an important oversight role if and when the two Koreas ever take significant steps toward reconciliation or reunification.

"Surely there will be an international presence on the peninsula even after a peace treaty, and then Switzerland and Sweden, with 60 years of experience [with the commission] &#8230; could perhaps [be called upon]," Lidstrom said.

The commission was established to investigate potential violations of the pact in both North and South Korea, in particular troop buildups.

Initially, significant numbers of personnel kept track of equipment and troop comings and goings at ports of entry in the two Koreas. For example, about 150 Swiss came to Korea in the months immediately after the armistice to help in the monitoring.

Over the years, commission manpower and relevance was greatly reduced.

Today, five members from each of the Swedish and Swiss commission delegations spend most of their time in a compound at the DMZ, adjacent to the Joint Security Area, at an annual cost of about $4 million. Poland sends representatives to a couple of commission meetings each year.

The commission continues to monitor troop levels in South Korea, as well as observe large annual U.S. and South Korean military training exercises to ensure they do not violate the letter or spirit of the armistice. When North Koreans find their way south of the DMZ, commission members will interview them to determine whether they want to defect to the South or be repatriated.

And, on occasion, the commission is invited to participate in U.N. Command Military Armistice Commission investigations. For example, the commission interviewed witnesses and reviewed records related to South Korea&#8217;s actions during a November naval skirmish in the Yellow Sea during which gunfire was exchanged, one North Korean sailor was killed and three others were injured. It has yet to issue its report on that incident.

Experts see little value in the commission, yet are quick to add that the panel should be kept in place for symbolic reasons as well as for the potential role it could play in the future.

Ryu Gil-jae, a professor at the University of North Korean Studies in Seoul, said "it is hard to say its existence is critical at all" except to show "how hard the global community has to work together."

David Garretson, professor of international relations at the University of Maryland University College, called the commission "a relic" but said it should be left intact.

So what would happen if the commissioners learned of a buildup of forces south of the DMZ while similar maneuvers in the North went unmonitored?

"We would stay neutral and impartial, and do the report by the book &#8212; and the book is the armistice agreement," Lidstrom said.

Of course, Lidstrom and Joss joked, the first place a finding might show up to inform the North would be in the KPA mailbox the North apparently chooses to ignore.