Uncertainty remains as U.S. hands over responsibility for ‘Sons of Iraq’ 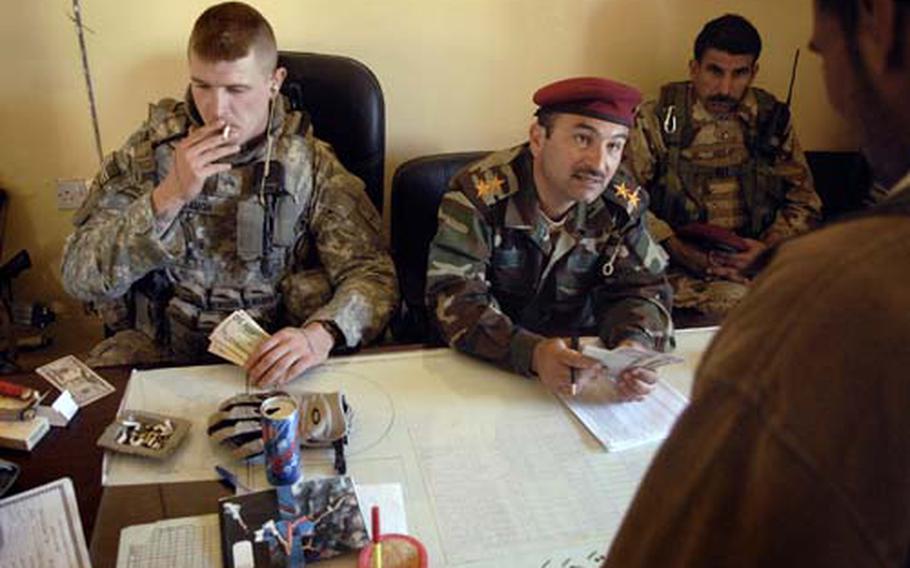 Sgt. Brandon Waugh, with Company B, 1st Battalion, 2nd Infantry Regiment, pauses in the middle of passing out $50 bills to an Iraqi army officer to pay “Sons of Iraq” members their final U.S.-backed paychecks at a school near Iskandariyah, Iraq. (Ben Bloker / S&S)

Sgt. Brandon Waugh, with Company B, 1st Battalion, 2nd Infantry Regiment, pauses in the middle of passing out $50 bills to an Iraqi army officer to pay “Sons of Iraq” members their final U.S.-backed paychecks at a school near Iskandariyah, Iraq. (Ben Bloker / S&S) 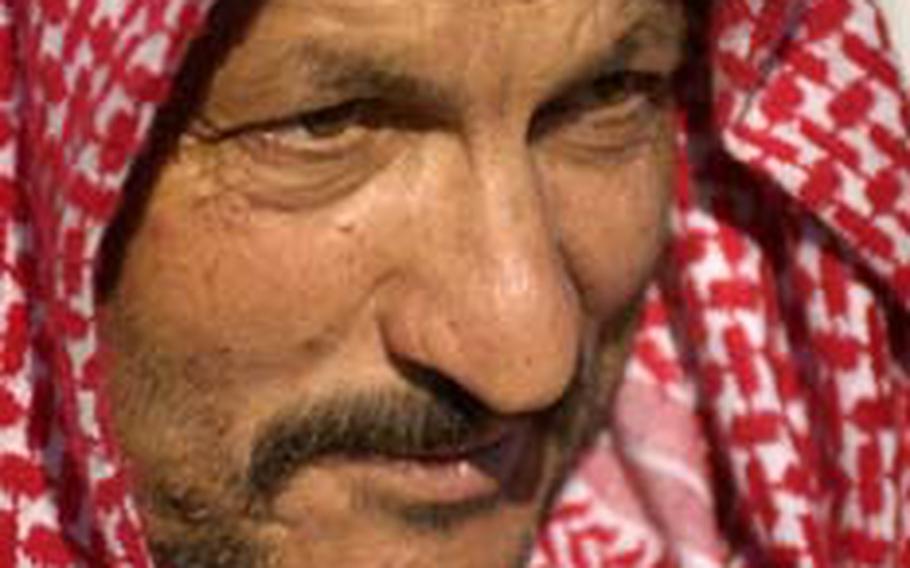 Only 20 percent of the members nationwide are expected to be incorporated into either the Iraqi army or police. That leaves roughly 80,000 men, who have been handling weapons and providing security, without steady, monthly pay.

What will those serving in the "Sons of Iraq" do when the program is dissolved?

"That is the $1 million question," said Army Capt. Brian Weightman, commander of Company B, 1st Battalion, 2nd Infantry Regiment. "We&#8217;ll see on that."

The roughly 2-year-old program, which grew from the "Anbar Awakening" and spread across the country, provides about 100,000 Iraqis nationwide between $200 and $300 a month to serve as armed guards at makeshift, roadside checkpoints.

In northern Babil province, soldiers with 1st Battalion, 2nd Infantry Regiment out of Schweinfurt, Germany, spent last week making what should be the final "Sons of Iraq" payments from U.S. forces in their area. Next month, the Iraqi army there should be taking over the responsibility for paying the ragtag band of teens, adults and elders who man checkpoints with sparsely loaded AK-47s.

It&#8217;s not only happening in Babil province but in other provinces around the country, including volatile Diyala. Late last year, the Iraqi army assumed making the payments to the roughly 50,000 "Sons of Iraq" in Baghdad, which reportedly has gone smoothly. The move marks a shift toward Iraqis taking greater control of their country and security infrastructure.

Unsure of their futureKhalid Abdal Rahman has manned checkpoints in northern Babil province as a "Son of Iraq" for one and a half years.

Rahman, 23, has no idea what his future holds with control of the "Sons of Iraq" program shifting from the U.S. to the Iraqi government &#8212; and then potentially being phased out.

He will try to get a job with the Iraqi army, which requires its soldiers to be able to read and write. Rahman has somewhat of an advantage over his brethren in the program because he can do so.

But for others, including the older "Sons of Iraq" members, the possibility of the group being dissolved makes for a bleak future.

At 52, Hatif Tubak Sharky said he&#8217;s too old to get a job with the either the Iraqi army or police. He fears he may be fired because he&#8217;s older. With a family and children to provide for, Sharky is worried of such an outcome. He&#8217;ll likely be jobless and have to resort to begging for money.

"I&#8217;m going to stay at home," he said through an interpreter. "I have no other job, no other career. I&#8217;m too old. I cannot work as a farmer or builder. Those are the two jobs available in Iraq &#8212; either you are a farmer or a builder. Because I am old, I cannot do either of them. That will leave me without a job, which is not good for me or my family."

Sharky dismissed the idea of enrolling in a job-training program, saying that he is too old for learning or studying in classes.

In parts of the country, Iraqi security forces are hiring the younger "Sons of Iraq" with more education to serve in the army or police. But none of the 3,700 "Sons of Iraq" currently in Weightman&#8217;s area of operation in northwestern Babil province along the Euphrates River have been incorporated into either the Iraqi police or army.

"The way I see it happening is that the Iraqi army will pay (the &#8216;Sons of Iraq&#8217;) for the next couple months to nine months," he said. "In the meantime, that buys some time for the government to come up with a jobs program that is feasible, kind of like a Tennessee Valley Authority. Something like that, I think, is in the works."

&#8216;Worry about my people&#8217;Some former "Sons of Iraq members" already have jobs and others can be farmers or herders, said Sheik i Talib Muhsin Humadi Alma&#8217;amory, who is responsible for 565 people, several of whom are "Sons of Iraq," in an area near Iskandariyah.

"They are farmers so they can live with what&#8217;s available right now until they get maybe a job with the new government with the situation getting better," said Alma&#8217;amory, speaking through an interpreter. "But as a leader of SOI, I worry about my people sometimes, yes. Maybe the process will be slow with the Iraqi government, and those people, they need to have something."

Training programs are under way, with the U.S. military assisting in the creation of vocational training centers, apprentice programs, and public works placement initiatives, according to a Jan. 9 Council on Foreign Relations report.

What concerns Weightman is a feeling of inequity that could emerge amongst those who do not get incorporated into Iraq&#8217;s security forces. He realizes the very realistic possibility of what could result from the "Sons of Iraq" being dissolved, but he doesn&#8217;t foresee any widespread disenfranchisement among the Iraqi men in his area.

"There will be a couple folks that will be disenfranchised, and they may lash out," he said. "There&#8217;s so many people that just want peace now and are very hopeful with the Iraqi government. We saw it with the elections. We see it with their support of the Iraqi army and Iraqi police that we certainly didn&#8217;t see two years ago. They will not give those folks (who resort to violence) any comfort or support. You might have an isolated incident here or there."