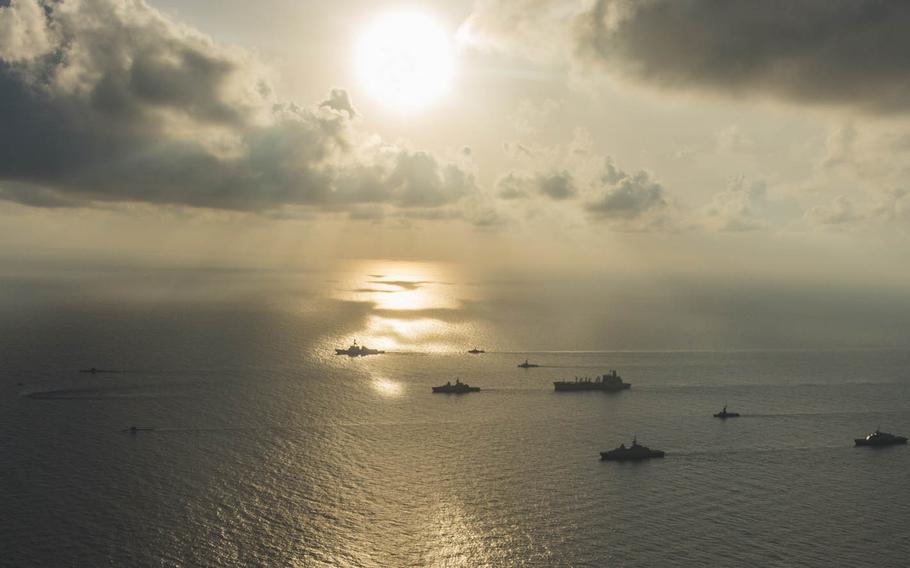 Ships and submarines from the U.S. and Singapore navies gather in formation in the South China Sea during Cooperation Afloat Readiness and Training, July 21, 2015. (Joe Bishop/U.S. Navy)

TOKYO — Concerns linger over a potential move by China to declare an Air Defense Identification Zone over the South China Sea, as world leaders and defense ministers gather for an annual summit in Singapore this weekend.

The United States and Japan have already refused to abide by China’s unilaterally declared ADIZ over the East China Sea that was announced in 2013.

The zone includes airspace over Japan’s Senkaku Islands, which China claims and where Chinese and Japanese jets have scrambled repeatedly in recent years.

Depending on the extent of the zone, it could cover territories and waters claimed by Vietnam, the Philippines, Malaysia, Taiwan, Brunei and Indonesia. It could also cover international waters and apply rules inconsistent with U.S. interpretations of international law.

“A Chinese ADIZ in the South China Sea could lead to tense mid-air encounters between U.S. and Chinese aircraft, especially as China has previously demonstrated a willingness to challenge U.S. military aircraft in contested maritime areas,” said a March report by the U.S.-China Economic and Security Review Commission.

Challenges by Beijing over sovereignty claims and by Washington in demonstrating rights to sail and fly in international waters have increased in the past year.

Chinese fighter jets exhibited “dangerous behavior” when they intercepted a U.S. patrol plane on May 17 in international waters, U.S. officials later said, though Beijing countered that its aircraft kept a safe distance.

China’s timeframe for declaring a South China Sea ADIZ — if it happens at all — remains unclear.

On Wednesday, a report from the South China Morning Post cited unidentified sources “close to the People’s Liberation Army” as saying that China was preparing a South China Sea ADIZ.

One source was quoted as saying a move was dependent on whether the U.S. “keeps making provocative moves to challenge China’s sovereignty in the region.”

The potential ADIZ will be discussed among analysts and government officials at the 15th annual Shangri-La Dialogue, which begins Friday in Singapore.

Carter is scheduled to appear again this weekend, as is Adm. Sun Jianguo, the Chinese military’s deputy chief of staff.

“Whether we will establish the ADIZ in the South China Sea will depend on whether security in the air and maritime zones will be a threat,” Sun said last year.

During a news conference in February, Adm. Harry Harris, head of Pacific Command, said the U.S. would ignore the ADIZ if China moves forward.

“I’m concerned about it from the sense that I would find that to be destabilizing and provocative,” he said.

The U.S. and Canada have long-established identification zones along their continental borders.

However, the U.S. doesn’t recognize the right of nations to apply ADIZ requirements to aircraft with no intention of entering a nation’s airspace — nor does it apply those procedures to, for example, Russian planes flying well off the California coast.

“Accordingly, U.S. military aircraft not intending to enter national airspace should not identify themselves or otherwise comply with ADIZ procedures established by other nations, unless the United States has specifically agreed to do so,” according to The Commander’s Handbook on the Law of Naval Operations.