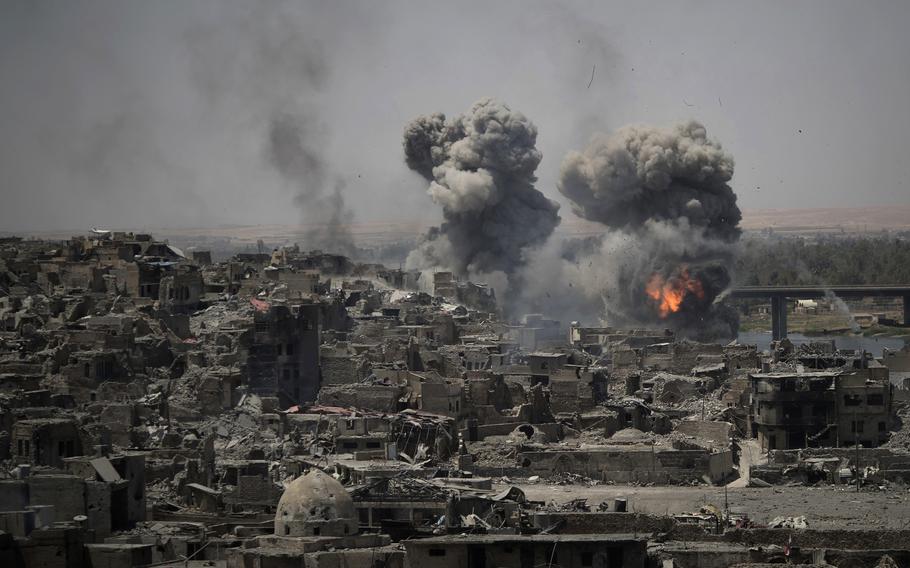 In this July 11, 2017 file photo, airstrikes target Islamic State positions on the edge of the Old City in Mosul, Iraq. (Felipe Dana/Associated Press)

MANAMA, Bahrain — A day after Iraq declared victory over the Islamic State group, a sense of gloom about the country’s future hung over a security summit in Bahrain, as officials worried that age-old sectarian rifts could make the progress short lived.

Toby Dodge, a British expert on Iraq, was hopeful Sunday when he walked into a closed-door panel talk at the swanky Ritz Carlton hotel that included an Iraqi parliamentarian and a Kurdish regional government official. But Dodge walked out of the meeting “pessimistic.”

“It springs from a sense of familiarity,” said Dodge, a onetime adviser to Gen. David Petraeus in Iraq.

After the U.S. surge in Iraq in 2007-2008, much of the country was stabilized. Shiite militias were quelled, al-Qaida in Iraq was pushed out, and the U.S. eventually began drawing down. But the Iraqi government under Prime Minister Nouri al-Maliki failed to build on the gains, with power struggles among Shiite and Sunni government factions. Meanwhile, Iraq’s military grew more fractured, its weakness exposed when ISIS fighters seized a third of Iraq.

After declaring victory Saturday, Iraqi President Haider al-Abadi called for national unity. But questions persist about the Iraqi government’s ability to deliver services and rise above the sectarian divisions uncorked in the aftermath of the 2003 U.S. invasion.

“The military victory may well be squandered,” Dodge said.

On Saturday, Petraeus, a speaker at the conference, shared those concerns.

“The battle after the battle in Iraq … may well prove more challenging than the defeat of ISIS,” Petraeus said.

During the Bahrain conference, which had representatives from about 40 nations, officials deliberated numerous security issues, including rivalries with Iran, the war in Syria and the potential effects on the Arab world of President Donald Trump’s announcement to recognize Jerusalem as Israel’s capital.

While the annual talks, organized by the International Institute for Strategic Studies, normally attract senior administration officials, none were present during three days of meetings.

On the military side, U.S. Central Command chief Gen. Joseph Votel attended, but did not speak during public forums. He did meet with Pakistan’s top general in a closed-door discussion. The U.S. has called on Islamabad to get more aggressive in targeting militant groups.

In Iraq, Baghdad must also find a way to navigate a fragile relationship with the semi-autonomous Kurdistan Regional Government, which has grown more tenuous in the wake Kurdistan’s referendum for independence.

Iraq will also have to figure out a way to establish control of various militia groups that helped in ISIS’ defeat. Among them are well-organized Shiite militias that also have political sway.

A more decentralized governing approach, with Baghdad pushing more autonomy down to the provincial level, could improve matters, Dodge said.

After ISIS’s defeat in Iraq and the fall of its de facto capital in Raqqa, Syria, there is a “sense of military achievement,” said Emile Hokayem, a Middle East analyst with the International Institute for Strategic Studies.

But Iran’s larger profile in both Syria and Iraq ensures it will be a major power broker going forward. Russia’s intervention in Syria, where it stabilized longtime ally Bashar al-Assad, also means Moscow is better positioned in the region than it was a few years ago.

“Both have had a return on their investment that was larger than expected,” said Hokayem, adding the two countries have been “strategic winners” in the region.