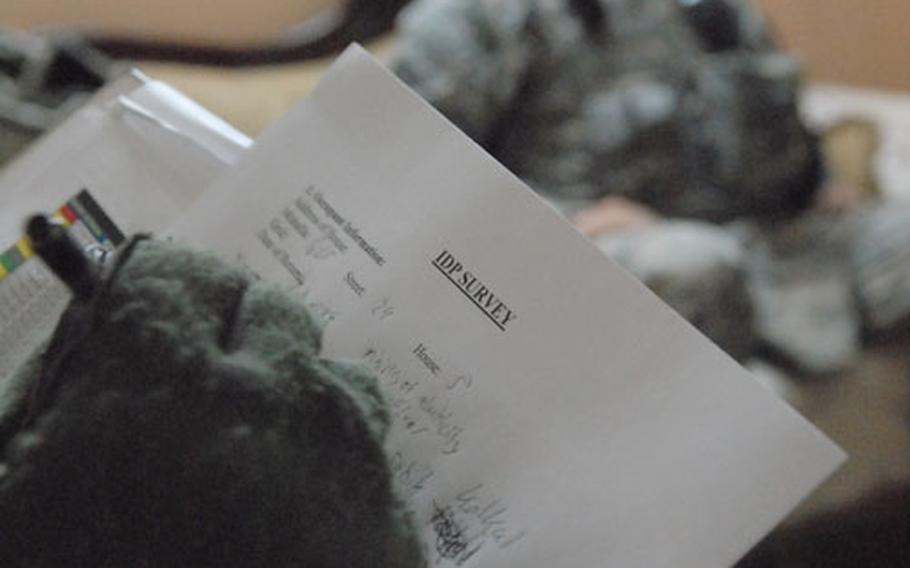 Second Lt. Scott Dawe fills out a displaced-persons form Thursday while collecting information from families who are returning to Baghdad’s Ghazaliya neighborhood. (Photo by James Warden/S&S)

Second Lt. Scott Dawe fills out a displaced-persons form Thursday while collecting information from families who are returning to Baghdad’s Ghazaliya neighborhood. (Photo by James Warden/S&S) American and Iraqi soldiers collect information from a Shiite man who recently returned to Ghazaliya. (Photo by James Warden/S&S)

BAGHDAD &#8212; Samia Agil Sail fled Baghdad&#8217;s Ghazaliya neighborhood two years ago after receiving threats from several people in the Sunni-dominated area. In one case, gunmen came into the Shiite woman&#8217;s home and shot at the ceiling.

Sail got tired of being away from her home, though. Although she didn&#8217;t know Ghazaliya&#8217;s security situation, she and her family of nine decided to return home two months ago.

But getting back into the house proved more difficult than just sweeping the dust off the unused floors. A squatter had taken up residence while Sail&#8217;s family was away. She had to go through the courts to force him and his family out. When she eventually got into her home, she found that the squatters had stolen everything they owned &#8212; even their clothes. Sail can&#8217;t even enjoy the return in peace because she has seen the squatter driving down her street twice since she returned.

For many families forced out of their homes by sectarian violence, the difficulties are just beginning when they walk through their doorway after months or years of being gone.

Many Iraqis who found themselves in the minority in their own neighborhoods fled to areas dominated by members of their own sect.

Now, as the security situation has improved, about 10 families a day are returning to the Ghazaliya area, said Capt. Thomas Melton, commander of Troop A, 1st Squadron, 75th Cavalry Regiment.

The Iraqi Army and Ghazaliya&#8217;s neighborhood advisory council run a resettlement headquarters to ease the transition for all these people, said 2nd Lt. Scott Dawe, an Troop A platoon leader. They help the families begin the paperwork necessary to get the 1 million dinars &#8212; now about $850 &#8212; that the Iraqi government gives to returning families. Iraqi Army soldiers then remove any squatters and check for bombs or weapons caches inside the home.

"The vast majority of (returning) people we find are supposed to be there and have checked in and filed paperwork," Dawe said.

American soldiers then check in on the families personally. Prisem Mohammad Malika returned home after an absence of four years and was happy to see the soldiers stop by. She asked the soldiers how to keep her son safe from insurgent attacks like car bombs.

"I feel safer when you show up here," she said.

Feelings are mixed, however. No less than 10 American and Iraqi soldiers crowded into a home next to Malika&#8217;s last Monday to collect certain details from him. First Lt. Mark Gerasimas worked his way down a survey form, asking how many men lived in the home, his job and, most tellingly, "Are you Sunni or Shi&#8217;a?"

In this case, the man just stayed silent &#8212; clearly uncomfortable with a question in which a wrong answer can mean a death sentence.

The man confirmed it.

The American soldiers concluded by taking his photo and scanning his retina and fingerprints into a database. He worried that the soldiers&#8217; presence would attract unwanted attention from people who aren&#8217;t happy to see Shiites returning to the neighborhood.

"Maybe tonight someone will put a (bomb) under my car," he said.

Others take steps to hide their identities. Few of the homes have the images of Shiite martyrs that often distinguish Shiites from their Sunni counterparts. A Shiite woman who&#8217;s married to a Sunni said she tells neighbors that she&#8217;s a Sunni like her husband.

American soldiers are doing their best to protect those who return. Over the past month, they&#8217;ve decimated Sunni insurgent cells that target Shiites. Nearly every night they also stroll through the neighborhoods meeting families and passing out tip cards so they can call the unit directly if they need help or have information to pass along.

"The American Army and the Iraqi army are not going to tolerate Shi&#8217;a families being scared out of Ghazaliya," said Staff Sgt. Andrew Morales.