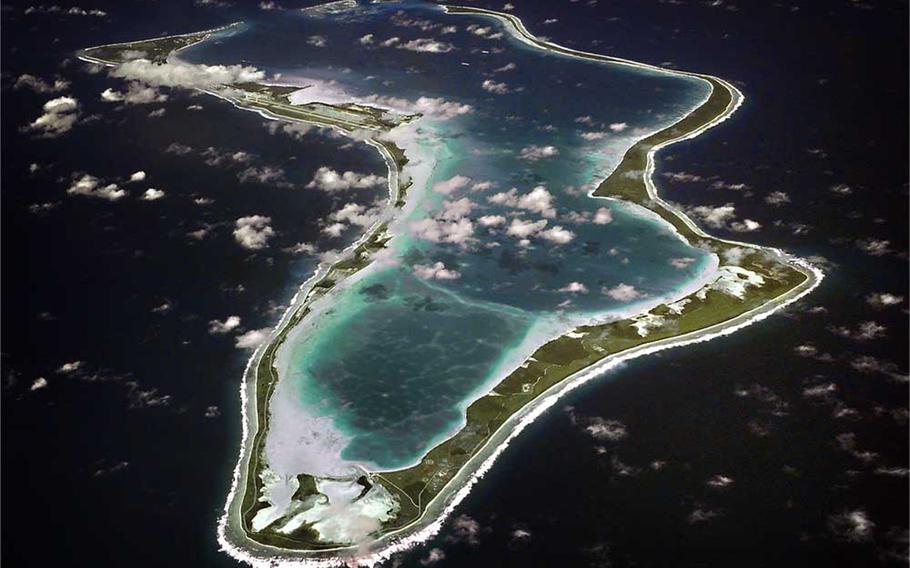 An aerial view of Diego Garcia. A recent ruling by a U.N. court has raised questions about the future of the U.S. base there. (Courtesy of the U.S. Navy)

An aerial view of Diego Garcia. A recent ruling by a U.N. court has raised questions about the future of the U.S. base there. (Courtesy of the U.S. Navy) 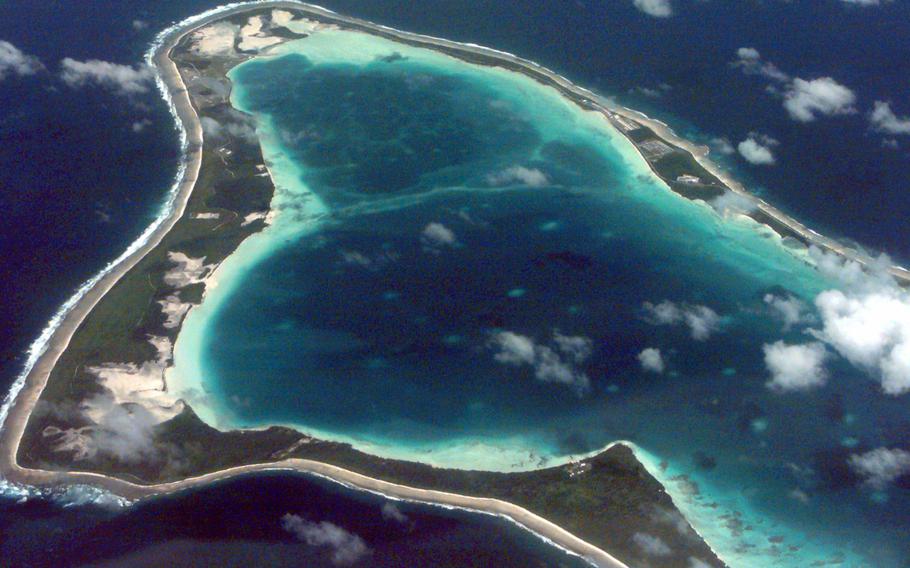 An aerial view of the island of Diego Garcia is pictured here in an undated photo. (U.S. Air Force)

The U.S. Defense Department has been mum on a United Nations court ruling calling for the United Kingdom to return to Mauritius “as rapidly as possible” the Chagos Islands — home to a key U.S. military base — after unlawfully carving up the island chain more than 50 years ago as part of a decolonization process.

Britain’s occupation of the Chagos archipelago was illegal after it separated the territory from Mauritius in 1965, the U.N.’s International Court of Justice said in an opinion published last week. The coral atoll Diego Garcia, the chain’s main island, is home to a U.S. military installation leased from the U.K. since the 1960s, but it’s unclear how the ruling might affect the mission there.

The advisory opinion is not binding, and the question of who holds sovereignty over the island territory, some 2,000 miles off the east coast of Africa, is expected to be debated by the U.N. General Assembly. But the ruling carries weight, since it came from the top U.N. court and could put significant pressure on London to act, The Associated Press reported last week.

The Defense Department has yet to make a public statement since the latest opinion, and military officials in Diego Garcia, Japan and the Pentagon declined to discuss its potential effect on the future of the Naval Support Facility on the atoll, referring Stars and Stripes to the U.K. government. The strategically important island more than 1,000 miles south of the tip of India has served as a staging ground for troop movements since 1966, when the U.S. signed a lease with the British to establish the base.

The Naval Support Facility houses 16 Navy and Air Force commands supporting operations in Europe, Africa, the Middle East and the Pacific theaters, according to its website. About 300 Air Force and Navy personnel are based there, Pentagon data show.

“We are not asking for the dismantling of the base,” Mauritian Prime Minister Pravind Jugnauth said last week, the Mauritian newspaper L’Express reported. Jugnauth did not discuss what the next step will be, but said he wanted Britain “to recognize the unity of Mauritius.”

British officials declined to comment on U.S. operations, referring inquiries to the Pentagon, but a spokesman for the U.K. Foreign and Commonwealth Office said officials there were looking carefully at the opinion.

“I will note, however, that this is an advisory opinion, not a judgment,” said Sam Bullen, the spokesman.

The military facilities on the island “help protect people here in Britain and around the world from terrorist threats, organized crime and piracy,” Bullen said.

At hearings last year, Mauritius Defense Minister Anerood Jugnauth said that the U.S. base would not be threatened by the outcome, telling judges that his country “has repeatedly made it clear to the United States and the administering power that it accepts the future of the base,” the AP reported.

The Chagos Islands had long been considered part of Mauritius, which the U.K. administered as a colony after capturing it from the French in 1810 until its independence in 1968.

The U.S. had first expressed an interest in establishing military facilities on Diego Garcia in 1964, court documents state. In exchange for 3 million pounds, Mauritius agreed in 1965 to let the U.K. separate the Islands into a new colony called the British Indian Ocean Territory, to be returned “at a later date.”

In the late 1960s and early 1970s, the British barred inhabitants from returning if they had left and evicted those still on the island.

Britain has in the past paid compensation to islanders, but Mauritius has been lobbying for the islands to be returned to its territory since 1980. In 2000 a British court ruled that a 1971 ordinance banning the islanders’ return was unlawful. The ruling was upheld in 2006, despite opposition from the U.S. and U.K. governments.

To this day, the Chagossians “remain dispersed in several countries, including the United Kingdom, Mauritius and Seychelles,” last week’s U.N. court ruling states.

Stressing that the territorial dispute was a “bilateral dispute,” Bullen said the U.K. has long assured Mauritius that the islands, which constitute the British Indian Ocean Territory, “will be ceded to Mauritius when we no longer need the territory to help keep us and others safe.”

The U.S. government was one of 15 U.N. members that had opposed a General Assembly resolution in June 2017 that referred the matter of the U.K.’s decolonization to the court, questioning whether the international body had jurisdiction.

In court filings, U.S. officials also cast doubt on whether the present-day people of Mauritius “represent the wishes of all Chagossians throughout the world,” and disputed the court’s standards for determining whether or not a rule of customary international law existed that would have prohibited the establishment of the British Indian Ocean Territory.

Last spring, in a written statement to the court meant to convey its concerns with the review, the U.S. government said that neither the Americans nor the British had plans to discontinue use of the Diego Garcia facility for decades.

“In 2016, there were discussions between the United Kingdom and the United States concerning the continuing importance of the joint base,” the statement said in a footnote. “Neither party gave notice to terminate (the lease agreement) and the Agreement remains in force until 2036.”