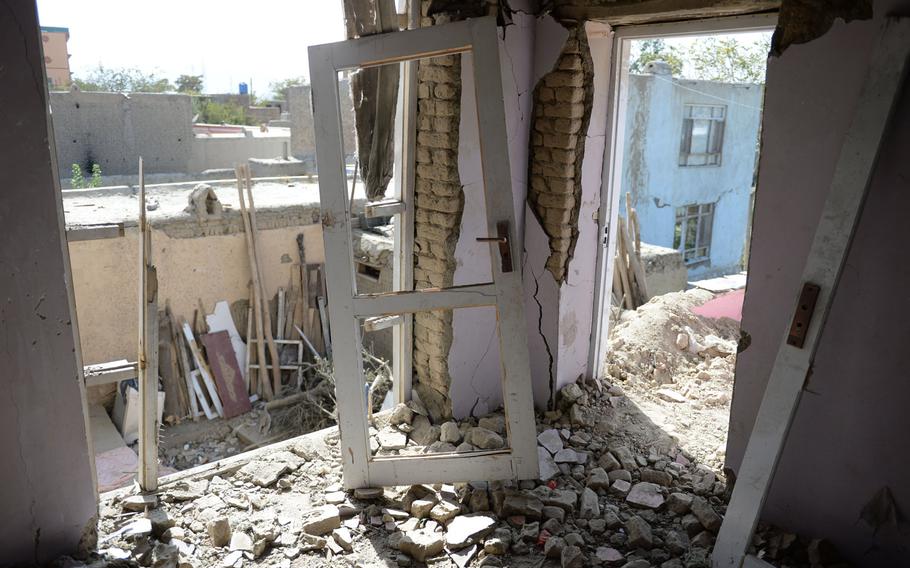 A house in Kabul stands in ruins on Oct. 8, 2017, more than a week after a U.S. missile mistakenly hit it, injuring several civilians. (Phillip Walter Wellman/Stars and Stripes )

A house in Kabul stands in ruins on Oct. 8, 2017, more than a week after a U.S. missile mistakenly hit it, injuring several civilians. (Phillip Walter Wellman/Stars and Stripes ) 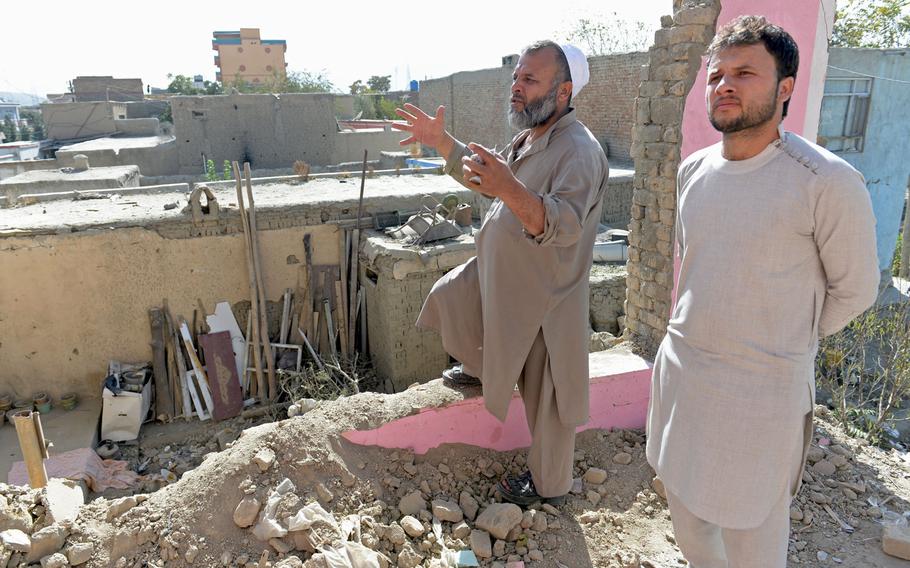 Ghulam Rabani, left, and his nephew Fardin, who like many Afghans uses just one name, stand in a second-story room of their home in Kabul on Oct. 8, 2017. Rabani explains how a U.S. missile destroyed the house more than a week before, injuring several family members. (Phillip Walter Wellman/Stars and Stripes ) 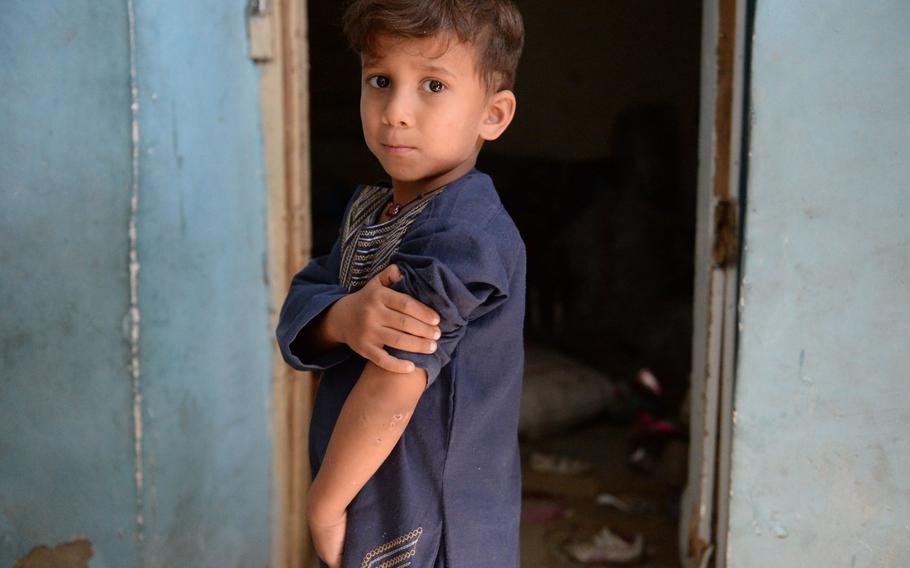 An Afghan boy, photographed on Oct. 8, 2017, reveals the wounds he got when a U.S. missile hit his house in Kabul more than a week before, injuring several of his family members (Phillip Walter Wellman/Stars and Stripes ) 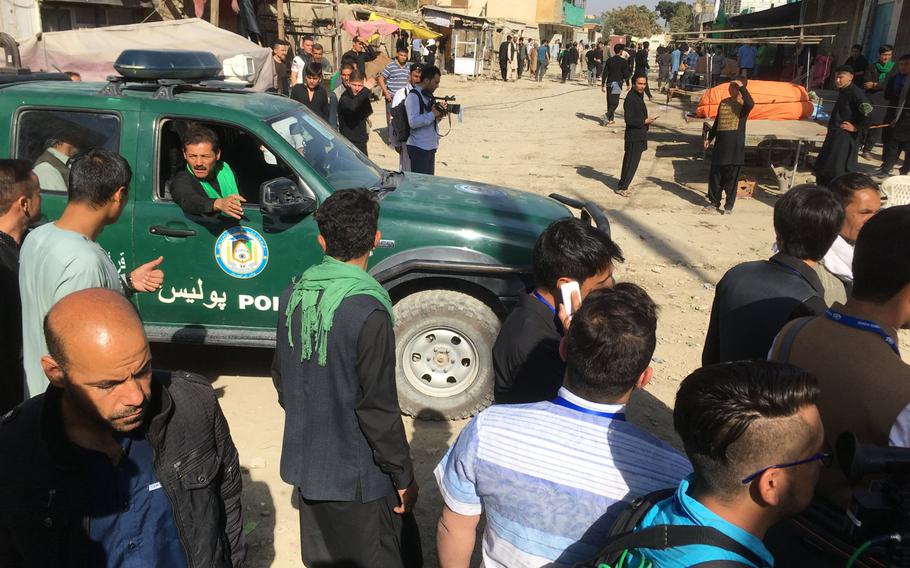 Police drive through a crowd of onlookers near the Shiite Hussainia Mosque in Kabul on Friday, Sept. 29, 2017, shortly after a suicide attacker blew himself up as Shiites prepared for the holy day of Ashura. (Phillip Walter Wellman/Stars and Stripes )

KABUL, Afghanistan — Mohammad Salim was driving his taxi in central Kabul last September when his wife called and begged him to return home. The Taliban had launched an attack on the airport from the family’s neighborhood, and she didn’t want him out.

He returned and was eating lunch with his family when everything went black. “Our house collapsed,” Salim said. “I was wounded and bleeding, and my daughter was screaming from underneath the rubble. Only her hand was visible.” An errant U.S. missile had struck Salim’s home, destroyed it and injured eight family members. It contributed to a record tally of civilian casualties caused by American and Afghan airstrikes last year, according to the United Nations. While overall civilian casualties in Afghanistan were down 9 percent due to fewer injuries on the ground, airstrikes resulted in 631 civilian casualties, including 295 deaths and 336 wounded, the United Nations Assistance Mission in Afghanistan said in a report released Thursday. Airstrike casualties were up 7 percent from 2016, marking the highest annual tally ever announced by the mission, which began documentation in 2009.

The Afghan air force was responsible for 309 of those casualties, UNAMA said, while international military forces caused 246, including 154 deaths. The United States is the only foreign force conducting airstrikes in Afghanistan. There were also 76 casualties attributed to undetermined pro-government forces, UNAMA added. UNAMA said it was particularly concerned about 114 children’s deaths caused by airstrikes last year. “Even if they are mistakes, they are attacking, and they are harming civilians,” said Salim’s father, Ghulam Rabani, who was also at the family home when it was hit in September. “After this incident, I don’t trust the government or the Americans.” NATO’s Resolute Support Mission disputed the numbers. It said its “detailed operational records” showed just 51 civilian casualties were proved to have been caused by international forces in 2017 — nearly five times fewer than the UN tally. Only 19 of those were fatalities. Mission officials said 133 cases were disputed. The UN and international military forces in Afghanistan have historically disagreed about civilian casualty figures and use different methodologies for calculating them. “In some instances, a civilian casualty report may contain insufficient detail to allow RS to make a determination regarding its veracity,” RS said in a statement. “In those instances, the report is considered ‘disputed.’” The new data, which UNAMA said raises “concerns about the effectiveness of precautions taken by pro-government forces to avoid civilian casualties during airstrikes,” follows months of concern from observers that the White House’s new strategy for Afghanistan could result in greater bloodshed and undermine international efforts in the country. Officially revealed in August, that strategy includes more firepower and relaxed restrictions on targeting the Taliban. Air Force data show the U.S. releasing more than triple the number of bombs and similar weapons last year than it did in 2016.

Meanwhile, the Afghan air force, according to its own data, nearly doubled to 425 the number of strikes it conducted in a recent 10-month period. Despite questioning precautions taken by the U.S. and Afghanistan to avoid harming civilians, UNAMA acknowledged that the sharp spike in airstrikes was not matched by an equally sharp spike in civilian casualties caused by them. “While emphasizing that no civilian casualties are acceptable, the reduced harm ratio suggests improvements in targeting and civilian protection procedures,” the report said. Overall, the report documented 10,453 civilian casualties, including 3,438 deaths and 7,015 injured. That remains significantly higher than pre-2014 figures, when NATO was engaged in combat operations in Afghanistan instead of solely training, advising and assisting national forces. U.S. airstrikes conducted in Afghanistan are carried out under a separate mission from NATO. Ground engagements accounted for one-third of all Afghan civilian casualties last year, but those were surpassed by bombings, including suicide and complex attacks. The deadliest single incident within the report happened in Kabul on May 31, when a suicide attacker detonated a truck laden with military-grade explosives in a densely populated area, killing more than 90 people and injuring nearly 500. One of the deadliest attacks of the 16-year war occurred just last month, when an ambulance packed with explosives was detonated in central Kabul, killing more than 100 people. Abdul Sattar, who runs a bakery in the city, was wounded by the blast. “There was a strong wave that pushed me over and I went unconscious,” he told Stars and Stripes, adding that his chest and one of his arms were injured. He said that while the new UN data was disheartening, it wasn’t surprising. “The security situation is getting worse every year,” Sattar said. “Everyone in Kabul lives in great fear; no one knows what’s going to happen next.” The UNAMA report blamed anti-government elements for 65 percent of civilian casualties in Afghanistan last year, a 3 percent drop. The report attributed 42 percent of attacks to the Taliban, 10 percent to the Islamic State group and 13 percent to undetermined and other anti-government elements. Responding to the findings, the Taliban said they were “obviously biased toward Americans and the Kabul administration.” “The figures of civilian casualties mentioned in the UNAMA report are not acceptable to us and we categorically reject it,” the group said in a statement. While RS also disagreed with UNAMA’s findings, it said it recognized the mission’s “important efforts.” “We shall continue our comprehensive effort to avoid civilian casualties and, when they are alleged to have occurred, to thoroughly investigate,” an RS statement said. After the U.S. strike on his home in September, which cost his hearing in one ear and left him and his young daughter with other lingering health problems, Salim said he hopes the international forces keep their word. “We know that the Taliban are killing most of the civilians and wounding them. They are the enemies of everyone,” Salim said. “But we hope that in the future, the foreign forces and the Afghan forces are more careful. They should not target poor and innocent people, because they are here to help us.”wellman.phillip@stripes.comTwitter: @pwwellman