Buy Photo
Afghan troops on March 6, 2018, assemble munitions to be used in airstrikes by the Afghan air force. The United Nations has expressed concern over a growing number of civilian casualties caused by airstrikes by both Afghan and international forces this year. (Phillip Walter Wellman/Stars and Stripes)

Buy Photo
Afghan troops on March 6, 2018, assemble munitions to be used in airstrikes by the Afghan air force. The United Nations has expressed concern over a growing number of civilian casualties caused by airstrikes by both Afghan and international forces this year. (Phillip Walter Wellman/Stars and Stripes) 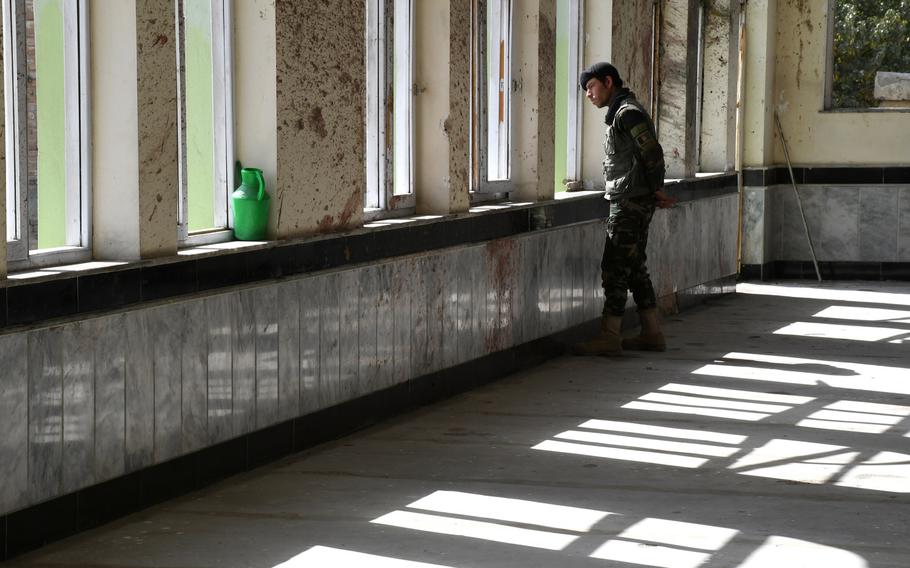 Buy Photo
An Afghan security official on Oct. 21, 2017, inspects damage to Kabul's Imam Zaman mosque, caused by a suicide bomber. The U.N. has documented a growing number of attacks targeting civilians in Afghanistan throughout 2018. (Phillip Walter Wellman/Stars and Stripes) Buy Photo
An Afghan security official looks at blood on the walls of the Imam Zaman mosque in Kabul, Afghanistan, on Oct. 21, 2017, a day after an Islamic State suicide bomber launched a deadly attack on the mosque. (Phillip Walter Wellman/Stars and Stripes) 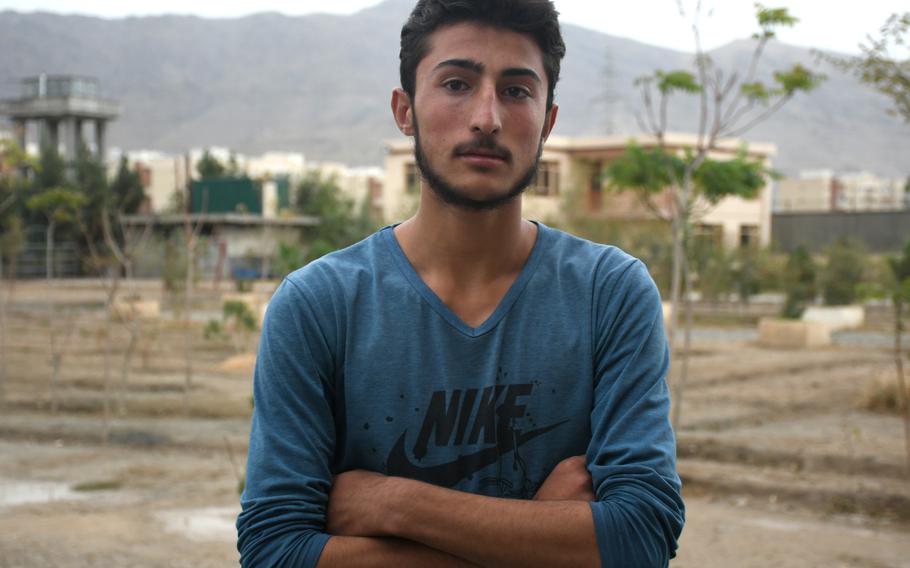 Buy Photo
Saifurahman Paimani, 16, from Maidan Wardak province, stands outside his room at the Kabul orphanage he lives in, on Monday, Oct. 8, 2018. Paimani says two of his sisters were killed in September by a U.S. airstrike on his family's home. (Phillip Walter Wellman/Stars and Stripes)

KABUL, Afghanistan — Militant bombs and allied airstrikes each contributed to a rise in civilian deaths in Afghanistan during the first nine months of this year, a United Nations report said Wednesday.

The U.N. Assistance Mission in Afghanistan documented 8,050 total civilian casualties from January through September, including 2,798 deaths. The overall number is roughly the same as last year, but total deaths rose 5 percent.

Nearly half of the civilian casualties — 3,634, including 1,065 deaths — were caused by improvised explosive devices, the weapon of choice for militant groups.

However, airstrikes have already caused more Afghan civilian casualties in the first nine months of 2018 than any comparable period since systematic documentation began in 2009, the report said.

UNAMA attributed just over half of the airstrike casualties to international forces — namely the U.S., which is the only foreign country officially conducting strikes in Afghanistan — while Afghan forces were blamed for 38 percent. Another 11 percent were undeterminable.

“As the number of civilian casualties from aerial operations documented by UNAMA reached unprecedented records already in 2018, the mission once again recommends that both the Afghan air force and international military forces review targeting criteria and pre-engagement precautionary measures,” the report said.

The report comes amid Washington’s accelerated bombing campaign in Afghanistan, which is part of the Trump administration’s strategy to bring the Taliban to the negotiating table.

The U.S. military regularly disputes the number of casualties caused by its airstrikes in Afghanistan. In its quarterly reports, UNAMA routinely attributes more Afghan civilian casualties to U.S. forces than the Pentagon does, citing different methodology.

“In regards to civilian non-combatant casualties, we are keenly aware of the continued practice of insurgents using their close proximity to civilians, often by force, to prevent air strikes and counterattacks on their positions,” the U.S. military in Afghanistan said in a statement Wednesday. “When these situations are identified in time, our forces have responded appropriately by choosing not to attack in order to protect innocent lives.”

The increase in airstrikes has shown a commitment to fighting terrorism and yielded “a positive result so far,” said Afghan Defense Ministry spokesman Ghafoor Ahmad Jawed.

However, some analysts say that the bombings, combined with the Taliban’s resilience, have complicated efforts to show that the coalition can win the war, which turned 17 on Sunday.

“Airstrikes may look and feel like ‘winning,’ but are the opposite,” said Jason Dempsey, an adjunct fellow at the nonpartisan Center for a New American Security in Washington.

The Taliban have recruited faster than Afghan and international forces can eliminate them, and the real challenge has been to present a legitimate, credible alternative to the militants, Dempsey said.

“So now we’ve increased bombing and have seen an increase in civilian casualties,” Dempsey said. “Without a credible force on the ground at least trying to justify these actions we actually cede the political battle to the Taliban.”

Civilian deaths caused by international forces sparked protests across Afghanistan during Hamid Karzai’s presidency and put a major strain on relations between Kabul and Washington.

Afghans who spoke with Stars and Stripes described both the shock they’ve felt from air attacks and the lingering fears of militant attacks at mosques, sporting events and other places they once felt safe.

Many of the Taliban attacks appear directed at the country’s Shiite Hazara minority.

“Everyone is scared now,” said Nadia Mosawi, 22, a Hazara whose sister was killed in August when a suicide bomber attacked a classroom of students preparing for university entrance exams in Kabul.

“My uncle called and said I needed to rush back home,” Mosawi recalled. “When I got back I could hear cries on my street. Then I saw my sister covered with blood. They had put her in the yard of our house.”

Last month, two cousins of Saifurahman Paimani travelled to the Kabul orphanage he’s lived at for the past three years to tell him that an airstrike had destroyed the family’s compound in Maidan Wardak province.

Paimani, 16, returned to his village, about 90 miles from Kabul, the following day and saw the house he grew up in reduced to a single room among a pile of rubble. His cousin’s adjacent house was completely destroyed.

Only six of his relatives had survived, while 12 — all women and children, including his 11- and 8-year-old sisters — were dead.

“Everyone said that foreign forces dropped the bomb,” Paimani recalled on a rainy afternoon at the orphanage two weeks after the attack. “They were sure of it.”

Paimani said after his family’s compound was destroyed, many villagers were upset.

“When things like this happen it can change people, it can even make them join the enemy for revenge,” he said.

The Afghan Defense Ministry said no civilians were killed in the village, but that an investigation was ongoing. The U.S. military in a statement said all airstrikes conducted in the area “were against valid military targets.”

UNAMA included the 12 deaths in their airstrike casualty figures.

Paimani said his intention was to remain at the orphanage he moved to after his father died and continue studying.

“I’m lucky I live here,” Paimani said, gesturing towards the austere building, “and I’m not thinking about revenge.”