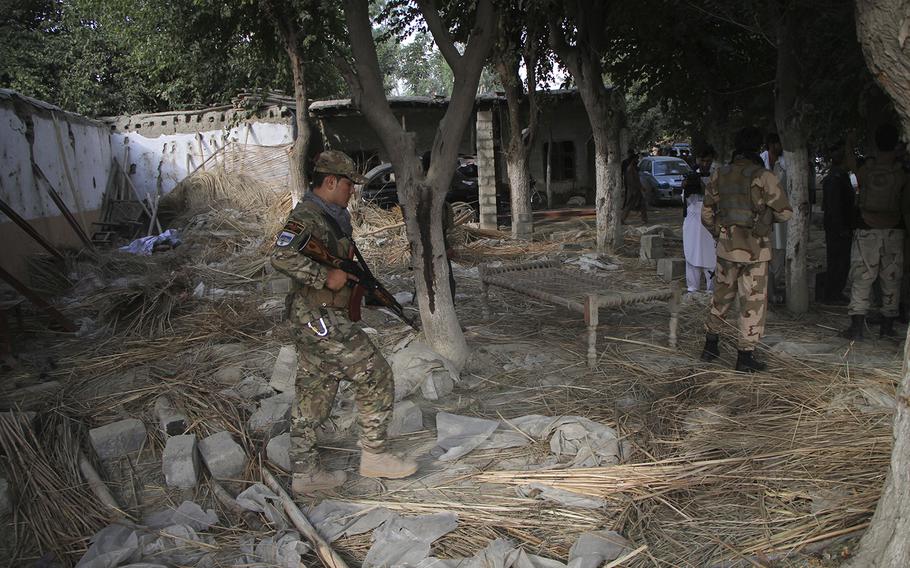 Afghan Security personnel inspect the site of a suicide attack in the Kama district of Nangarhar province, east of Kabul, Afghanistan, on Tuesday, Oct. 2, 2018. The suicide bomber struck an election rally on Tuesday, killing at least 13 people and wounding more than 30, a provincial official said. (AP)

KABUL, Afghanistan — The United Nations on Sunday called on militants in Afghanistan to stop using improvised explosive devices in civilian areas, after it documented a sharp rise in civilian casualties caused by the explosives this year.

“The killing and maiming of Afghan civilians by improvised explosive devises, particularly suicide devices, has reached extreme levels in Afghanistan,” the U.N. mission in the country, UNAMA, said in a report.

IEDs caused nearly half of all conflict-related civilian casualties from Jan. 1 to Sept. 30, UNAMA said. It documented 1,065 civilian deaths and 2,569 civilians injured by all IED attacks during that time — a 21 percent increase compared to the same period last year.

The number of civilian casualties caused specifically by suicide IED attacks increased by 46 percent during that time, according to the report.

UNAMA also expressed concerns over a rise in deliberate attacks on civilians, mostly carried out by the Taliban and the local Islamic State affiliate.

“The unpredictable nature of these types of attacks has caused Afghans unbearable suffering and forced them to live in fear of the next explosion, severely curtailing their ability to carry out normal lives,” Yamamoto added.

This year, victims of deliberate attacks have included students, sports fans and worshippers at mosques. The country’s Shiite Hazara minority appear to have been targeted specifically.

“It wasn’t like this in the past,” Mira Ali, a Hazara business owner in Kabul, told Stars and Stripes.

Ali’s 29-year-old nephew was killed last month when a suicide bomber attacked a gym in a Hazara neighborhood of the capital.

“Now Daesh is directly targeting us; Afghans are getting killed like sheep here,” Ali said, using an Arabic acronym for Islamic State. “No side cares about it — not the terrorists, not the government forces, not the foreign forces.”

Civilian casualties are often seen as a metric for gauging success in the U.S.’s longest war, which entered its 18th year on Sunday.

Other metrics causing concern are the amount of territory held by insurgents and casualties among Afghan forces. According to Pentagon and independent analyses, insurgents hold or contest more territory than at any time since the 2001 U.S. invasion. Last month, the Afghan defense minister announced that August was the deadliest month ever for Afghan forces, with more than 500 soldiers killed.