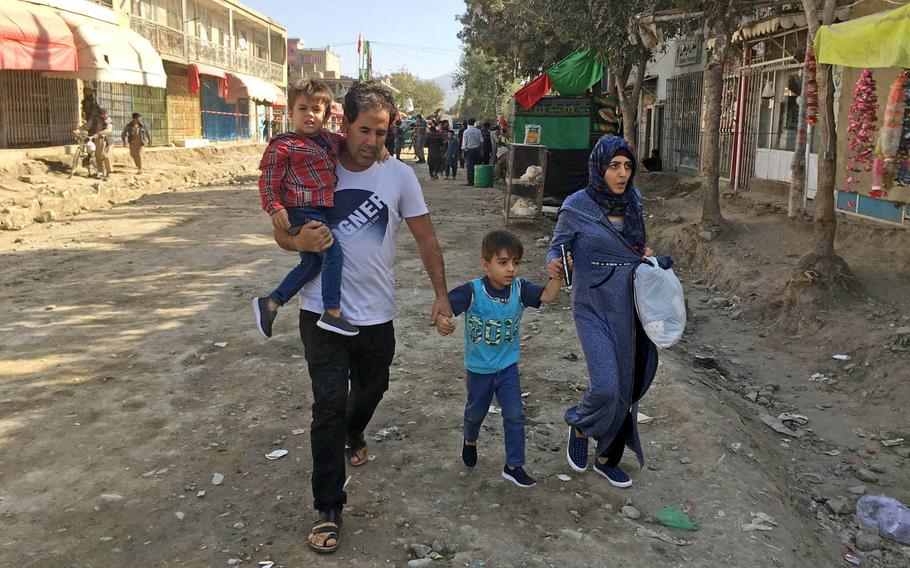 Buy Photo
A family evacuates the area around the Shiite Hussainia Mosque in Kabul after a suicide attack. Civilian casualties in Afghanistan remained near record levels during the first three months of the year, according to the United Nations mission in the country, which released data on Thursday. (Phillip Walter Wellman/Stars and Stripes)

KABUL, Afghanistan — Civilian casualties in Afghanistan remained near record levels during the first three months of the year, the United Nations said in a report released on Thursday.

The U.N. Assistance Mission in Afghanistan documented 2,258 civilian casualties between Jan. 1 and March 31, including 763 deaths and 1,495 injured.

Civilian casualties have been on the rise since international forces ended combat operations in 2014. This year’s first-quarter numbers are comparable to those of 2016 and 2017, which were 2,268 and 2,255, respectively.

UNAMA said suicide attacks and improvised explosive devices, as well as complex attacks, were the leading cause of civilian casualties so far this year. Ground engagements ranked as the second-leading cause, followed by targeted and deliberate killings.

The mission said anti-government elements, such as the Taliban and Islamic State, caused 1,500 civilian casualties — 511 deaths and 989 injured. That’s a 6 percent increase from the same period last year.

During the past quarter, the mission attributed 67 civilian deaths and 75 injured to pro-government aerial attacks, which compares to 72 killed and 76 injured during the same period in 2017. It said U.S. airstrikes were responsible for 35 percent of the airstrike casualties.

The U.S. military and the Taliban each routinely contests the U.N.’s data, insisting the number of civilian casualties it causes in Afghanistan is much lower.

In its annual report for 2017, UNAMA recorded the highest number of civilian casualties from pro-government airstrikes since it began documentation in 2009.

An airstrike on April 2, which struck a religious school in Kunduz province and which residents said killed at least 50 people, has heightened fear that the trend is continuing into 2018. Government officials said high-ranking Taliban officials were killed in the attack.

In its Thursday report, UNAMA called on all sides to do more to protect civilians.

“All parties to the conflict in Afghanistan must do everything in their power to protect civilians from harm,” said Ingrid Hayden, a top U.N. official in Afghanistan. “Afghan civilians continue to suffer, caught in the conflict, in ways that are preventable; this must stop now.”