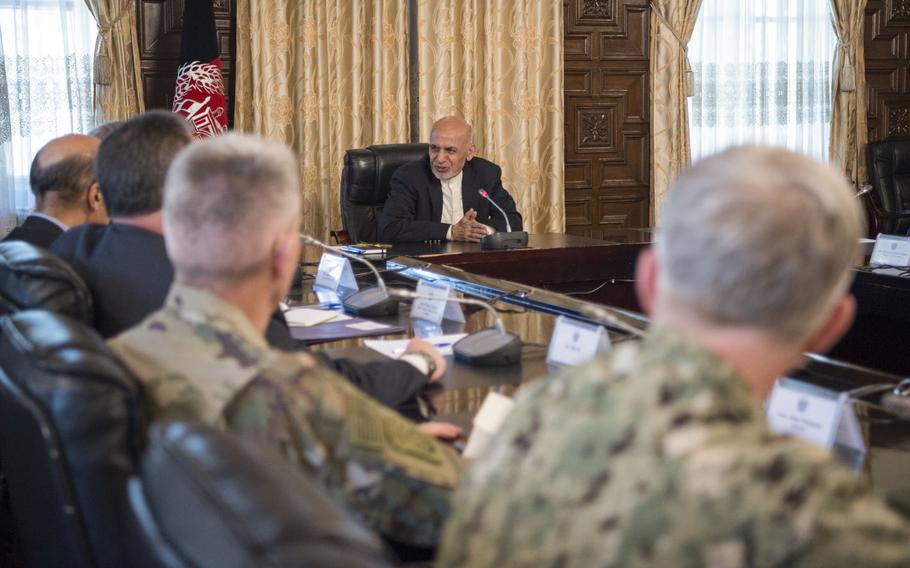 Afghan President Ashraf Ghani at the presidential palace in Kabul during a meeting with Defense Secretary Jim Mattis in April. The United Nations said on Monday, July 17, 2017, that the war had claimed a record number of civilian lives in the first half of this year. (Brigitte N. Brantley/Courtesty of the U.S. Air Force)

KABUL, Afghanistan — The war in Afghanistan has claimed a record number of civilian lives in the first half of the year partly because of an increase in suicide attacks, the United Nations said Monday.

The U.N. Assistance Mission in Afghanistan documented 1,662 civilian deaths between Jan. 1 and June 30, an increase of 2 percent over the same period last year. The number of civilians injured during that period fell 1 percent, to 3,581.

Deaths in the capital, Kabul, which has historically been one of the safest places in Afghanistan, accounted for some 20 percent of the total tally. That figure highlight the deteriorating security situation in the country, more 15 years after the U.S.-led invasion that ousted the Taliban.

“The human cost of this ugly war in Afghanistan ... loss of life, destruction and immense suffering — is far too high,” Tadamichi Yamamoto, the head of UNAMA said in a statement. “The continued use of indiscriminate, disproportionate and illegal improvised explosive devices is particularly appalling and must immediately stop.”

The report said a massive truck bomb that detonated at the entrance of Kabul’s Green Zone on May 31, was one of the “deadliest incidents documented” by the group since 2001. The blast, for which no one has yet claimed responsibility, killed at least 92 civilians and injured nearly 500 others.

Among those killed was the husband of Naseema, 36, who like many Afghans uses only one name.

“He was the only one who could win us bread; now that he is dead, we are dead, too,” Naseema said, referring to herself and her four children.

Naseema said since her husband Nasir died, the family has had no income and their landlord has threatened to evict them for not paying the rent.

Zeid Ra’ad Al Hussein, the U.N. High Commissioner for Human Rights, was referring to stories like Naseea’s when he said the statistics in UNAMA’s latest report, “horrifying though they are, can never fully convey the sheer human suffering of the people of Afghanistan.”

“Each one of these casualty figures reflects a broken family, unimaginable trauma and suffering, and the brutal violation of people’s human rights,” Al Hussein said in a statement.

UNAMA’s report documents a rise in the number of women and children killed and injured, reversing a decline recorded last year. The report said 174 women were killed and 462 injured in the first six months of 2017, an overall rise in casualty figures of 23 per cent on the same period last year. Meanwhile, 436 children were killed and 1,141 others injured, marking a 9 percent increase in child deaths.

UNAMA commended the Afghan security forces for their efforts in reducing civilian casualties from ground engagements by 10 percent. However, it said ground engagements, which are still the second-leading cause of casualties, resulted in 434 confirmed deaths and 1,375 injuries.

“The decrease is attributed to a reduction in casualties caused by indirect and/or explosive weapons, mostly mortars, used by pro-government forces,” UNAMA said.

The Taliban responded to UNAMA’s report by calling it “partial and in contrast with reality.”

“It can be seen that UNAMA has again given preference to politics in this humanitarian issue and has tried to acquit the invaders and their hirelings,” the group said in a statement.