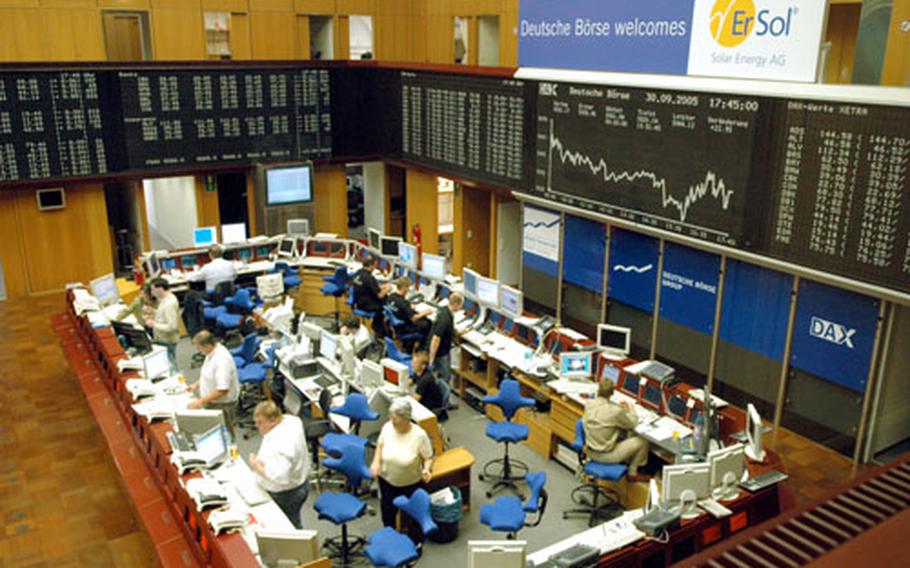 The floor of the Frankfurt stock exchange, with its "big board", the Dax, at right. The computerized Xetra Dax closes at 5:30 p.m., but trading goes continues on the floor until 8 p.m. (Michael Abrams / S&S)

The floor of the Frankfurt stock exchange, with its "big board", the Dax, at right. The computerized Xetra Dax closes at 5:30 p.m., but trading goes continues on the floor until 8 p.m. (Michael Abrams / S&S) 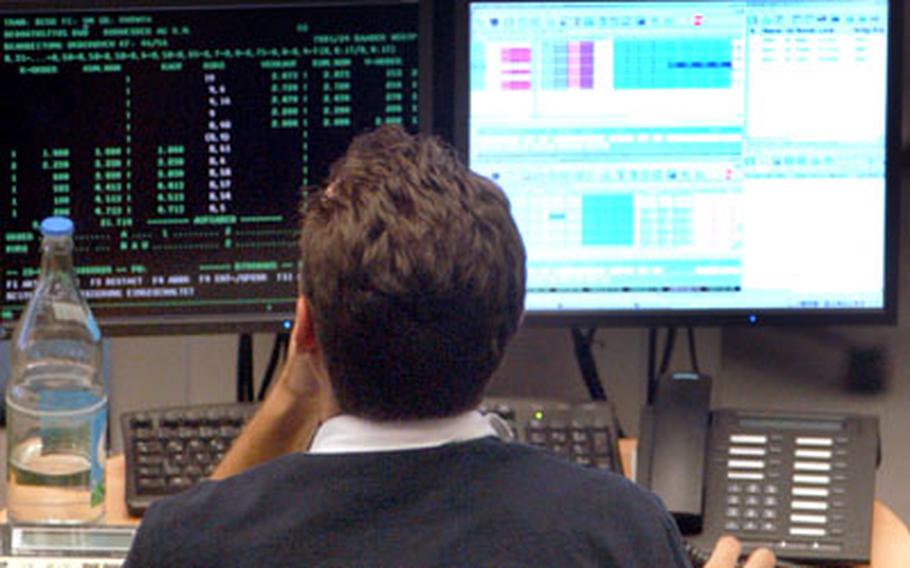 A broker watches his computer monitors on the floor of the Frankfurt stock exchange. His T-shirt reads: "Frankfurt bourse — best prices from 9:00 to 20:00." (Michael Abrams / S&S) 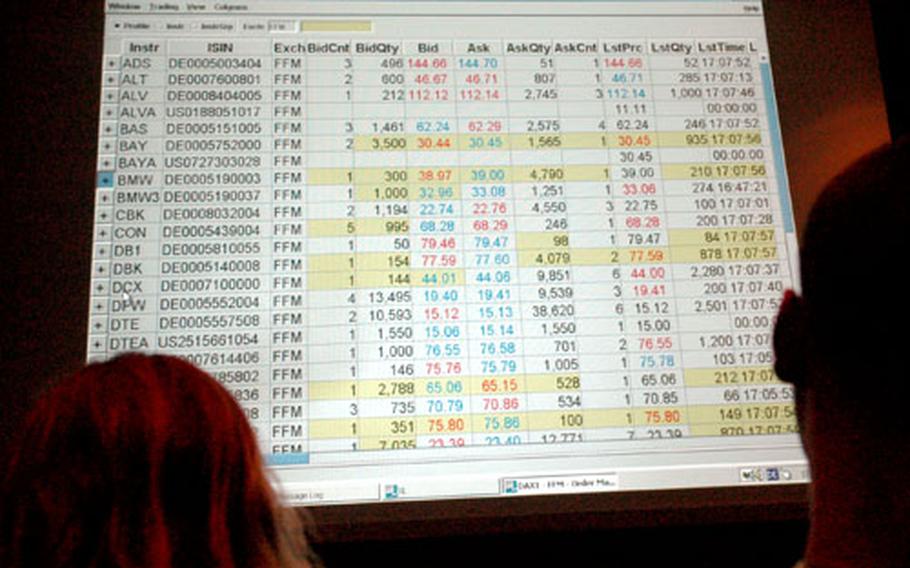 Students from an University of Maryland economics class watch the Frankfurt stock market&#39;s Xetra Dax computerized trading board during a briefing about the exchange last Friday. (Michael Abrams / S&S) 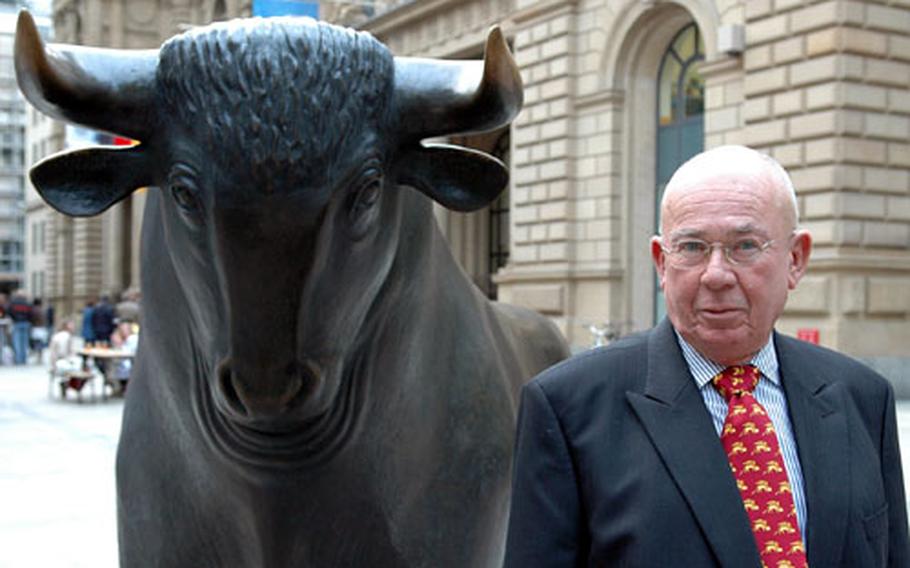 George Neblett, an University of Maryland professor, stands in front of a statue of a bull in front of the Frankfurt, Germany stock exchange. Neblett took his Economics 201 class on a field trip to the exchange. (Michael Abrams / S&S)

Every fraction of a second, the Munich-based company&#8217;s stock price flickered across the Frankfurt stock exchange&#8217;s digital version of the Big Board, prices and trading volume rising incrementally.

That kind of volume at the close of trading Friday got Sgt. 1st Class Watson Wallace&#8217;s attention, with the 35-year-old Bostonian wondering if it was possible to know who was buying those shares, and which brokerages got their investors the best purchase price.

Give that man an A!

Wallace, with the Hanau-based 709th Military Police Battalion, was one of a handful of 35 students out of George Neblett&#8217;s Economics 201: Macroeconomics class who really got it &#8212; who realized he was this close to seeing behind the curtain what separates the financial players from suckers.

Wallace et al. had the unusual experience of accompanying Neblett, a full professor and political economist with the University of Maryland University College Europe, on this semester&#8217;s field trip to see the Frankfurt B&#246;rse &#8212; the third largest by volume among European exchanges.

Neblett, a German speaker with a doctorate from the University of W&#252;rzburg, takes each semester&#8217;s students on a tour of the Frankfurt exchange, access that usually only comes with money or influence. But Neblett jokes that he &#8220;knows people in high places &#8230; my wife,&#8221; Trudy Zielke-Neblett, who works for the Hessen state Finance Ministry.

The Frankfurt exchange, best known for its blue-chip stock index called the DAX, is one of the world&#8217;s most profitable equity markets for its owners. But it does a fraction of the volume of the New York Stock Exchange, the world&#8217;s largest equity market, which lists more than 3,000 companies with a combined market value of $12 trillion.

Though the volumes, computer architecture and companies trading may differ, stock markets worldwide come down to matching a seller seeking a certain price with a buyer willing to pay that price, said Rebecca Schmidt, the legal department staff member at Deutsche B&#246;rse AG who gave the UMUC student&#8217;s briefing and short tour.

The buying and selling was most exciting for the students who also are investors. Sean McAnarney, 32, said he started out investing in mutual funds, but the field trip &#8220;opened my eyes to the mechanics&#8221; of stock trading, he said.

The field trip got him thinking about how good a job his own brokerage is doing, said Wallace, who&#8217;s working on a business management degree. &#8220;Who are the smart guys out there who are making the right decisions?&#8221; Wallace wanted to know.

His interest in equities began when Wallace was deployed to Iraq, where he started reading personal finance magazines. Many of the soldiers who received Iraq deployment bonuses are figuring out that buying a new BMW, which will lose most of its value in a few years, may not be as wise a move financially as investing the money to build wealth, the professor said.

In fact, Wallace was working his analytical powers overtime.

Wallace, who predicts he&#8217;ll get an A in Neblett&#8217;s class, has made a few disappointing investments, including Delta Airlines. Delta, now in bankruptcy court, is selling for about 75 cents per share, down from a 2005 high of about $7. When he saw Lufthansa Airlines, one of the 30 companies on the DAX, selling for 11 euros, or about $14 share, Wallace couldn&#8217;t help wondering why Delta and Lufthansa are moving in opposite directions while facing the same business challenges, such as rising fuel costs.

He couldn&#8217;t wait to go home and go online to research the giant German carrier.